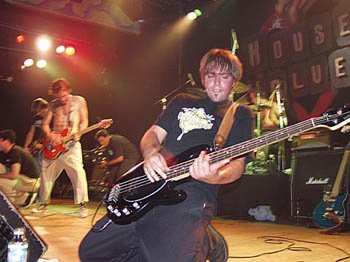 On April 2, 2001, VH1 debuted a competitive reality TV show called Bands on the Run. The concept was to have four unsigned bands compete for a prize package that included $150,000 in cash, equipment, a showcase before industry execs, and a professionally produced music video to be aired on VH1. Of the four competing bands was San Diego hard-rock quintet Soulcracker.

“Bands on the Run made us more successful,” says drummer Bob Hamel. “We got tons of radio play and played sold-out shows across the country.”

In addition to the national attention Soulcracker enjoyed as a result of being on Bands on the Run, the show also handed Soulcracker one of the most blatant screw-overs in the history of reality TV.

“Because of the business I’m in,” says Hamel, who is a visual-effects producer currently working on the Vampire Diaries, “I periodically run into crew members from Bands on the Run. They always tell me it was fixed.... We lost because we were supposed to lose, and looking back, I feel so good about that.”

In a nutshell, BOTR was a touring competition, during which the four bands would travel from city to city and try to earn money by selling tickets and merchandise. The band with the most money by the end of the 15-week, 11-city tour would win the prize package. The finals came down to Soulcracker and a pretty-boy pop-rock band from Dallas called Flickerstick.

“Flickerstick was a radio-friendly, mainstream rock band,” says Hamel. “But we were all over the place, musically, and cast as the bad guys, which is funny because Bands on the Run was just this game show we were trying to win...we had no idea that anyone could [be made] to look bad or good on a show like this.”

Going into the final episode, Soulcracker was ahead by over $3000. However, the producers arbitrarily added a $5000 purse to the winner of a battle-of-the-bands event, rendering the first 14 weeks of the contest meaningless. In a turn of events that many observers deemed as “highly suspicious,” Flickerstick won the battle, the purse, and, consequently, the contest.

“Whether or not it was fixed,” says Hamel, “the show opened many doors for all of us. We toured the country, made some good money, and got to be rock stars for a year.”

The original lineup of Soulcracker, including Matt Johnson, who left long before BOTR was shot, will play Winstons on July 30.