A Little Help from Jenna Fischer 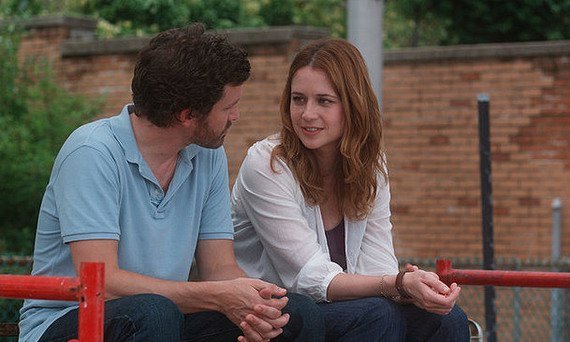 I regret missing A Little Help, which last fall won Best Narrative Feature at downtown’s San Diego Film Festival. Still, a pleasure deferred is not always lost, and the revelation of the picture is Jenna Fischer. You might have seen her on The Office or dealing with the brazen guy comedy in Hall Pass.

As Laura, a Long Island wife, mom, and dental hygienist, Fischer can seem a little floaty and liquid. And not simply because Laura often turns to beer and then to vodka. She has the driftwood manner of someone whose life is coming apart, and she isn’t sure whether to welcome that or flee in panic.

Laura was always the free, dreamy, pretty girl of her family, to the envious resentment of her brisk, hard-charging sister Kathy (Brooke Smith). Laura got the handsome stud (Chris O’Donnell) whom Kathy wanted, but he has become a workaholic bore and a cheater. When fate deals a hard hand, Laura has to play it through with son, Dennis, 12. He is acted by pudgy Daniel Yelsky, with a gift for the stone-cold zinger that could have spelled “sitcom kid” if director and writer Michael J. Weithorn, a TV producer and writer making his first theatrical feature, had opted for that facility.

The saving surprise is that Weithorn courts that option, slides up against it amusingly, then contours it into areas more serious and unexpected (he does get a bit too formulaic with Lesley Ann Warren and Ron Leibman, as Laura’s parents). Laura’s family is goofed-up in a real, uneasy way. The core of reality even rescues some risky humor (the movie is set in 2002) about the 9/11 tragedy. Weithorn inserts that element in a way that doesn’t cripple the story and takes it to a touchingly vulnerable payoff.

Most savingly, he lets Fischer fulfill a role that keeps its edges exposed. Laura, adrift, starts to paddle for the shore of maturity. Fischer makes each stroke count without splashing up pat inspiration. She gets key help from Rob Benedict as Paul, her sister’s husband, another cool dreamer who made a bad love choice for fishy reasons. Their shared scene in a garden gazebo is as good a segment of credible acting as you may see this year. Handsomely shot, sharply written, A Little Help is a keeper. The people are often immature, but the movie is engagingly adult. 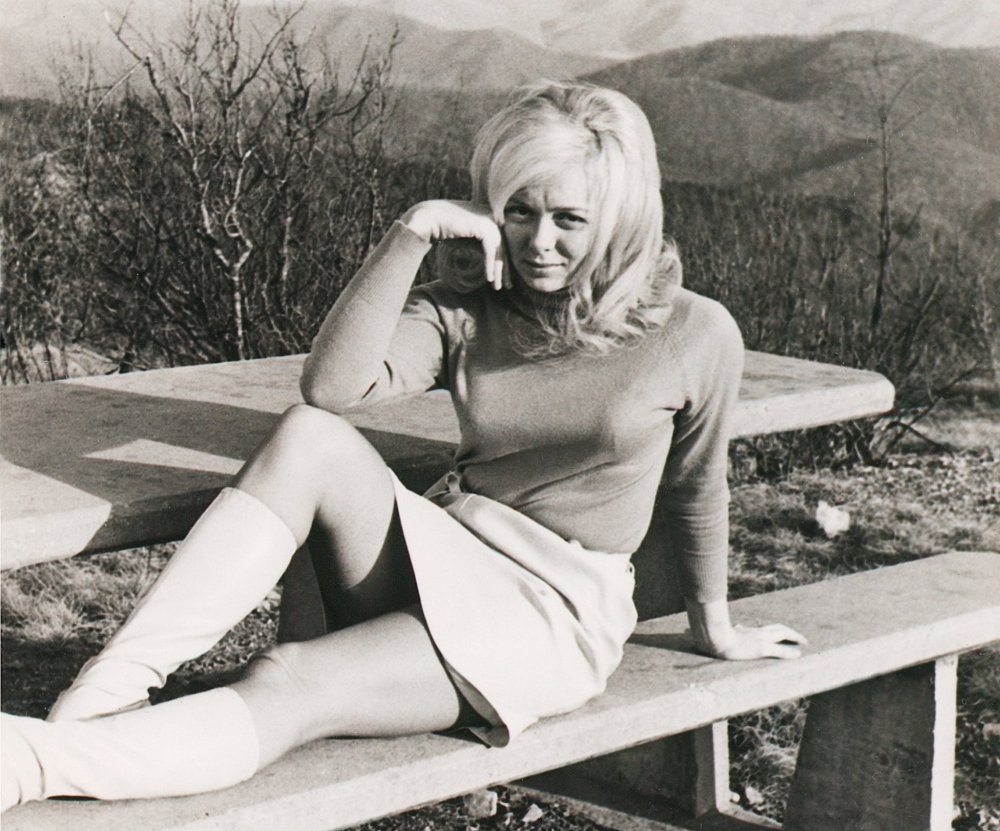 A major brain behind the camera, Errol Morris has made documentaries on a dismal miscarriage of Texas justice (The Thin Blue Line), war-haunted Robert S. McNamara (The Fog of War), science-genius Stephen Hawking (A Brief History of Time), and a morbidly geeky Holocaust denier (Mr. Death). But sometimes, Morris likes to let his busy mind have a wandering stroll, as in his long, speculative articles for the New York Times. And now Tabloid, slumming on the ratty-tatty side of life.

Awash in Mormon guilt, he later said he’d been raped. This made the British tabloids do what they naturally do. After milking this for months, as if having a lark, Joyce fled to the States disguised as a deaf mute and retreated into a rustic celibacy not burdened by guilt about her former life as a sex pro and “model.”

Though much older and heavier now, Joyce remains a complete vanity kit, with a smile that no camera can resist. Morris’s can’t, and he tricks up her coy, breathless story with cute graphics and file footage. Is the movie an attack on Mormon puritanism, a celebration of tacky fame, or a lament for how nut-ball our media mania has become? Take your pick. By the time Joyce decided that her dog Booger had “made a Christ-like sacrifice for me,” I was wishing for a good, soothing snooze.

Snow Flower and the Secret Fan 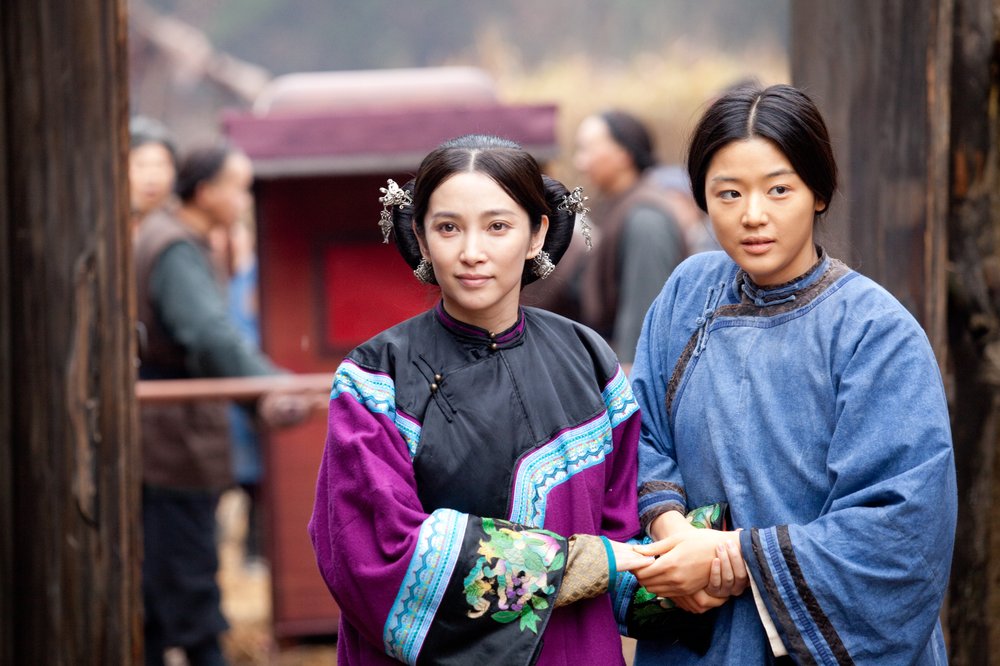 Director Wayne Wang started so well with Chan Is Missing (1982). He then turned gooey with Dim Sum: A Little Bit of Heart, The Joy Luck Club, and Maid in Manhattan. He has gone to Shanghai for this contraption, a lacquered and lathered chick flick about the old Chinese custom of laotong sisters, joined not by blood but by a pledge of soul sisterhood in a patriarchal society.

The script extracted from Lisa See’s novel indulges in the sort of balanced, symmetrical sentimentality that goes back beyond the Ross Hunter soapers to silent films. Two modern girls, Nina and Sophia, bond in a Shanghai rapidly becoming a forest of banal high-rises. One of them feels pulled to the 19th-century past and is writing a story about laotong soulmates Lily and Snow Flower. Lily’s feet are bound (broken, then shrunken) to attract a rich husband. But he is a stern bore, and she pines for gentle Snow Flower, whose unbound feet fated her to marry a rural butcher. In the old ways (which still persist), only sons are really wanted.

The full, jammed menu includes fortune cookies of fate, opium addiction, armed rebellion, a cholera epidemic, but (alas) no locusts from The Good Earth. The words “lesbian” and “foot fetish” are never mentioned, yet the story finds time for a terrible Aussie singer mangling Chinese. The past-era scenes are often filmed as immaculate kitsch, and to say the acting is inexpressive is like saying that pancakes are vertically challenged. 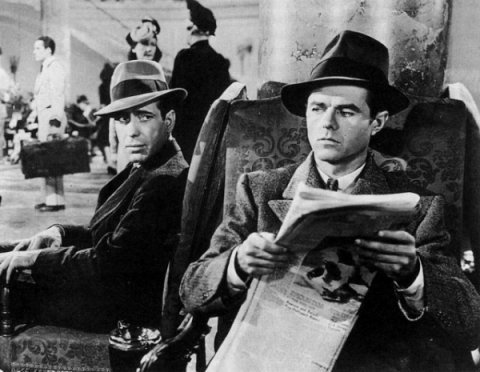 The Maltese Falcon is a very nocturnal film, so its Ken Cinema midnight showing on Saturday (July 23) makes fine sense. This movie and Citizen Kane crowned 1941, the miracle year that also had The Lady Eve, The Little Foxes, Man Hunt, Meet John Doe, How Green Was My Valley, High Sierra, Suspicion, Strawberry Blonde, The Thief of Baghdad, and even (please, no snickering) George Sanders in The Gay Falcon.

Marilyn Ann Moss will appear at 7 p.m. on Saturday, July 30, at D.G. Wills Books, 7461 Girard Avenue in La Jolla. She will discuss her acclaimed new book Raoul Walsh: The True Adventures of Hollywood’s Legendary Director. Moss had access to Walsh papers and family stories not previously brought to print and deeply researched this vivid biography of the action-minded but often subtle master who guided such stars as James Cagney (in White Heat), Errol Flynn (Gentleman Jim), John Wayne (The Big Trail), and Humphrey Bogart (High Sierra), plus some remarkable women.

Reviewed in the movie capsules: Beats Rhymes & Life and If a Tree Falls.