Thursday 21
It’s geek week here in America’s Finest, the one week each year that I actually feel pret-ty darn cool. For fellow nerf herders not into “Con,” read on... SanFran’s garage-rock one-man band Ty Segall broke pop ground (“Girlfriend”) with last year’s classic-sounding collection Melted. He’s out to tout this year’s Goodbye Bread, a kinder, gentler Segall who seems eager to please, hosing off some of the scuzz and sharing pretty, giddy pop poetics. Take a taste of “You Make the Sun Fry” at ty-segall.com/. This very recommendable set’s out now via indie stalwart Drag City and Segall will slice it up at Casbah after Audacity, Kabbs, and Spider Fever.... And alsos: from a reinvigorated O.C. scene, lo-fi two-piece Tapioca and the Flea will land on Tin Can Ale House and serve up some goosebumpy psych-surf chillwave...Whistle Stop gets Makeout Weird with THErapist and a slew of DJs and artists and stuff...Ché Café exposes Portland punx Raw Nerves. Age of Collapse and OTRO open the show...and it’ll be punk-pop from Kut-U-Up at Belly Up for the feel-good reunion of the summer:) 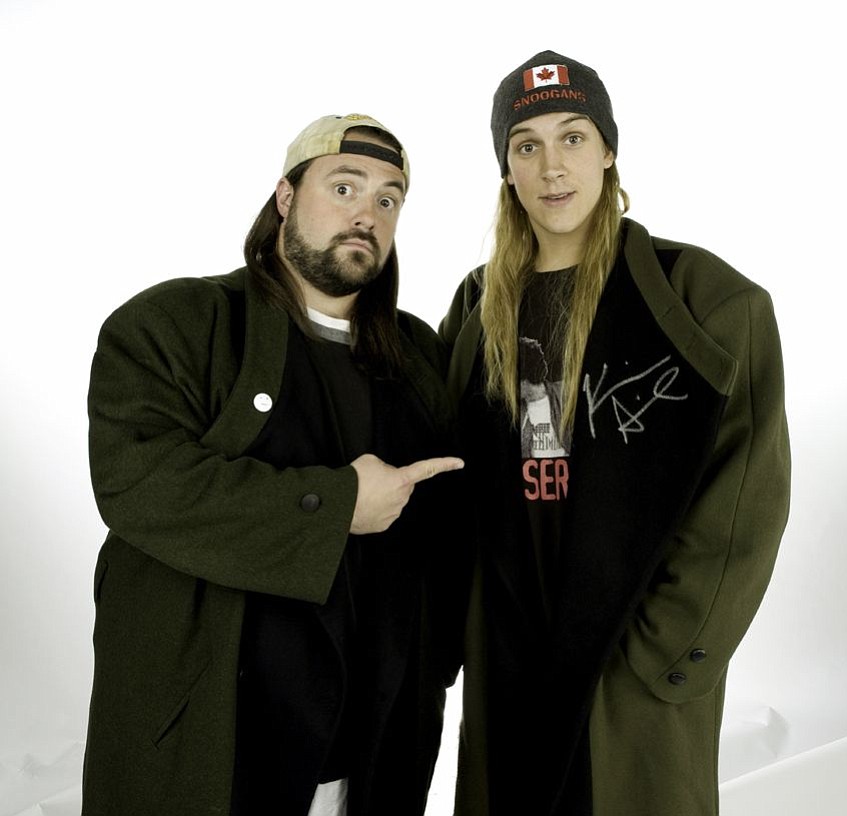 Jay and Silent Bob at House of Blues

Yeah, I know it’s a “Con” event, but these guys are sick funny, and they sent me passes with backstage access just to say how “street” they still are, despite Jay’s hair don’t, Kevin’s dirigibilious girth, Glover’s over-exposure, and Garman’s — I don’t even know who he is. This dill’s going to have way more wizards than muggles, knowimsayin? It’s going to be packed to the rafters with so many C- and D-list celebs we’re gonna fuck the bell curve for-ever.... Anyway, for the rest of you la-hoozers, there’s a beer fest brewin’ down at Qualcomm, featuring local bands (Greyboy, Pinback) and crafty brews. Click this for the lists: sandiego.gov/qualcomm. After reading Ed Bed’s “Beer Heaven” cover a couple weeks back, I’m thinking beer just may save our city, citizens.... The 4 o’clock Friday freebies are back at the track. G. Love’ll kick off Del Mar’s summer of fun this Friday post races. Anyone else think they should move the stage back out front by the fountain? I’m sorry, but the slope sucks it.... Best of the rest has punk-n-roll throwbacks Iceage at Casbah with Cult of Youth, Ale Mania, Spirit Photography, and Tropical Popsicle will drop on the Atari ’tween sets...O.C. hardcores DMF join Coda Reactor and Death Punch to knock down the Shakedown for Midway fave Old Man Andy’s birthday (dude looks good for 70!)...while local folkies River City flow into Whistle Stop with Western Set.

Saturday 23
I love me some Diamond Dave–era Van Halen, y’all, and short of a miracle reunion, Atomic Punks stroke my jones (giggity). 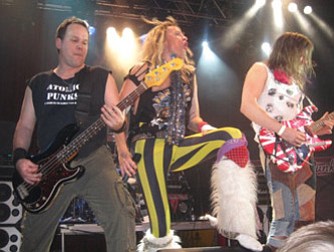 Atomic Punks at Belly Up

Just squint a little bit and rock along at Belly Up. It’s fun. As are Weezer teasers Geezer and Mötley Inc., umlaut and all.... Actor Tim Robbins and his Rogues Gallery Band will play a Dylanesque early set at Anthology. I guess Robbins’s dad was a folk-and-blues musician. Blues cookers Rod Piazza & the Mighty Flyers follow it up.... Utter mentionables: the caped-crusaders of ska-punk, the Aquabats, fly into House of Blues...while up the Fifth Ave. hill, it’ll be psych-pop sets by Sugarrushrailroad and the Loons at Tin Can Ale House...vocal folkies Venice visit AMSDconcerts (amsdconcerts.com)...“Prisoners No More,” electro ’Zonies A Life of Science plug in at Bar Pink with Super Stereo...Til-Two fills a pop-punk bill with the Getdown, Fools Rush, Save Amos, the Regressions, and Russ Hughes...and I know all you Yes and ELP fans are foaming for English prog-pop four-piece Asia. The band’s back to its original all-star lineup at Ramona Mainstage, as they tour in support of their latest Omega. Allmusic says it’s “Asia being Asia.” Soulless and overindulgent? Uh-oh, y'know what, forget all this and ignore what it says in the paper. Now Ramona Mainstage's website says "John Payne of Asia." He was in the band for, like, a minute and a half once upon a time. 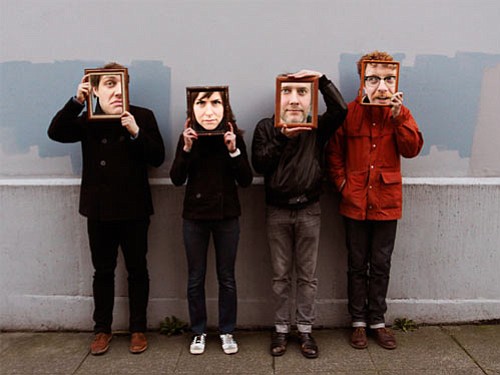 The Seattle act's Cracked Love & Other Drugs was a pleasant surprise among the dearth of garage I got last year, as head UH Dean Whitmore sifts a little more selectively through the Nuggets and then packs that PacNorthwest wallop of volume. Like, a retro Mudhoney. Go get some: myspace.com/unnaturalhelpers. With Uzi Rash and Unruly Bangs, this is a trick triple bill at the Normal Heights hotspot.... A push to the left and shove to the right, Metal Mother (“Dark, spooky melodies layered over pulsating, seductive beats” — BUST Magazine) plays Soda Bar with former Sleepy Sun singer Rachel Fannan.... Meanwhile, electroniscapists Primitive Noyes ideate at the Tin Can...Earth hits Casbah with Angelo Spencer et les Hauts Sommets, which I’m guessing is French for “his pretentiously named band”...and Abbey Road apes Beatles at Belly Up.

Monday 25
Brooklyn black-metal band Liturgy plays Anti-Monday at Casbah (our resident metallurgist Dave Good broke this one down somewhere in these pages)...while the club curates more sets across town at Soda Bar, featuring Langhorne Slim and Henry Wolfe. (You can see how the country bumps wouldn’t have really fit with the metal heads in Middletown.)

Tuesday 26
Hardcore hits the Ché Café as Take Offense, Ringworm, Retaliate, and Blighted take a steel-toed boot to the campus collective. No they don't. Ignore that and what I wrote in the paper. This June 26 date was mixed in with Ché's July dates on their new and totally not improved listings board.... Anywho, Beantown barroom rockers Continental continue their Tuesday residency at Shakedown, and this week’s it, kids, kaput, so get out and get some.... Local retro psych-pop up-and-comers Short Eyes play Tin Can with TRMRS, Fungi Girls (TX), and Chamuko.... While down the big Laurel hilly, from Philly, synth-pop trio Cold Cave joins like-minded Toronto two-piece Austra at Casbah for some danceable darktronic heaviosity, he typed while rolling his eyes. 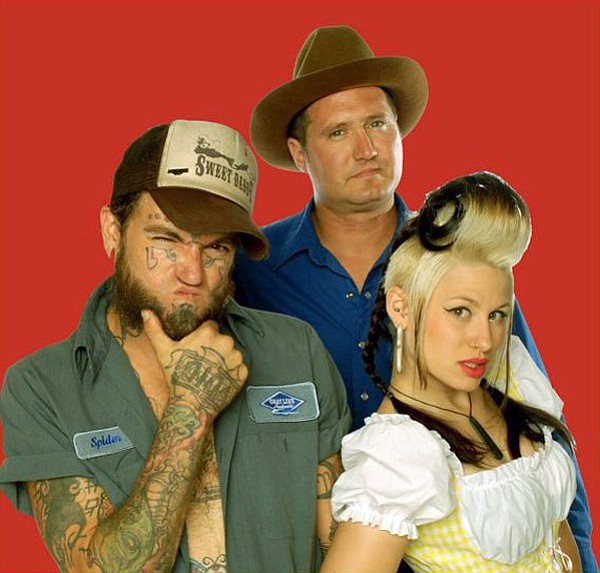 Jason & the Punknecks at Shakedown

The Nashville act is the self-proclaimed “most dangerous band in bluegrass,” and they’re here to lay out their latest, Drinkin’, Druggin’, and Jesus. Have mercy.... Canuck art punks Fucked Up hit Casbah with Trash Talk. Will Crain “Of Note”d that one for ya.... Portland synth kids Susan Subtract and Ivy Slime, aka Branes (sic), enlighten Soda Bar...Get Back Loretta keyboardist Kevin Martin sets up a CD-release at Bar Pink with Gayle Skidmore in support...that cello-shreddin’ singer-songer Ben Sollee’s at Belly Up behind this year’s “celebration of all things electrified,” Inclusions...and Indigo Girls play Humphrey’s by the Bay. I only mention this so I can tell you that I once won a million dollars from a drunk lady who insisted that Melissa Etheridge was an Indigo Girl. Easy money.
— Barnaby Monk

Heres some Argentine Buzo radio for ya: