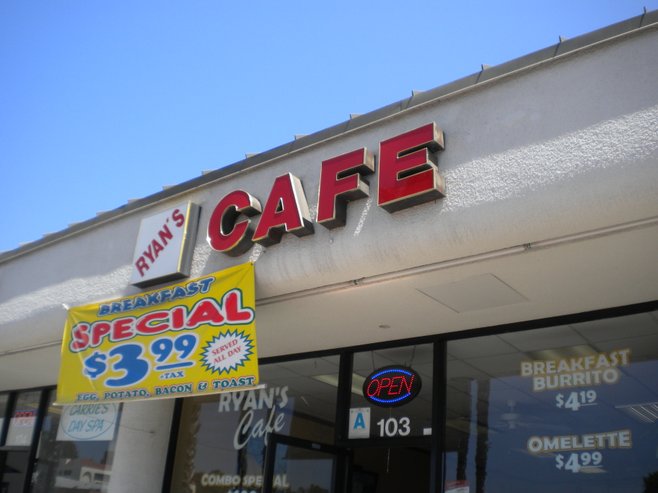 It’s the kid. Kole. Three years old with a giant cheeseburger in his mitts. Tries to take a giant bite. Gets ketchup and mayo all over his nose and cheeks. Then looks up to his mom for a victory wipe.

I’m looking on from a nearby table. Man, he makes that burger look sooo good. If I were in advertising, I’d sign the kid up for a national campaign. 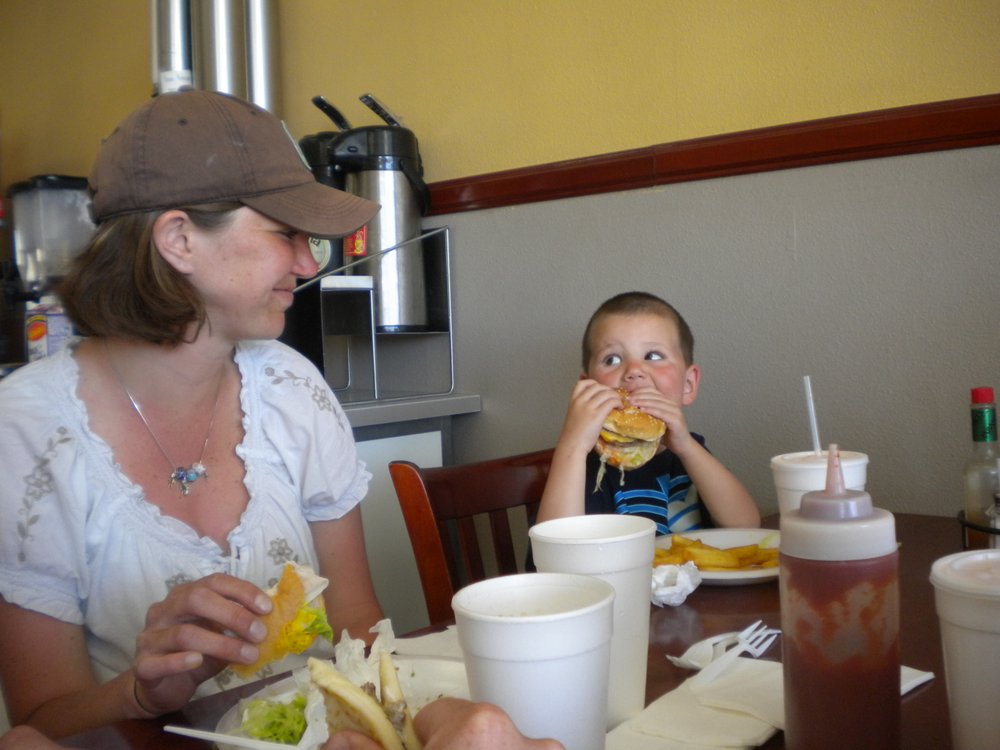 Three-year-old Kole from Denver, Colorado, looks to his mom, Beckie, for back-up in his attack on a quarter-pounder.

’Course, this ain’t no national chain. It’s just a nice little joint about halfway up Linda Vista Road from the Green Line trolley’s Morena/Linda Vista stop, and halfway down from those important institutions, USD and Ballast Point Brewery.

I was heading for that cheap USD eatery at the top of the hill, where I ate the other day in the Student Life Pavilion. ’Course, many a slip twixt cup and lip: got as far as Napa Street when I saw this sign, “Ryan’s Cafe.” And, more important, “Breakfast Special, $3.99. Egg, potato, bacon, and toast. Served all day.”

Inside, it’s about half full. Couple of women in pantsuits, family of three kids and a mom and dad, a studious-looking guy reading and chowing on a chicken sandwich, and a couple of older men waiting in line. There’s a big repro of Van Gogh’s The Night Café on one of the mustardy walls, nice mahogany-colored wood tables and chairs, and a pink counter at the back with a six-panel wall menu above it. I love this moment, knowing there’s gonna be plenty to choose from.

I spot that chicken sandwich on the menu. “Marinated chicken breast grilled and served on a French roll with Swiss cheese, mayo, lettuce, tomato, $6.39.” That seems to be the ballpark price for everything, from fajitas to “turkey Louie” to chicken Phillies to patty melts to pastrami sandwiches. Gyros are $5.69.

This is when I notice the three-year-old kid disappearing behind his giant burger. Somehow, his small face, the giant bun…I have to ask. Turns out, the family’s visiting from Denver. Dad’s name is Ryan. “That’s why we stopped. We saw the name,” says the mom, Beckie. She’s eating a turkey deluxe sandwich. “Pretty good,” she says — it has Swiss, avo, tomato, alfalfa, and mayo ($6.39). Kole, the three-year-old, is tackling a cheeseburger quarter-pounder ($5.39). Jacob, Kole’s seven-year-old brother, looks like he might actually demolish his cheeseburger, while Christopher, Jacob’s twin, is halfway through a plate of buffalo wings. At $8.79, they’re the most expensive item on the menu. The dad, Ryan, says his gyro (with beef and lamb, green peppers, onion, and yogurt, $5.69) is one of the best he’s had. 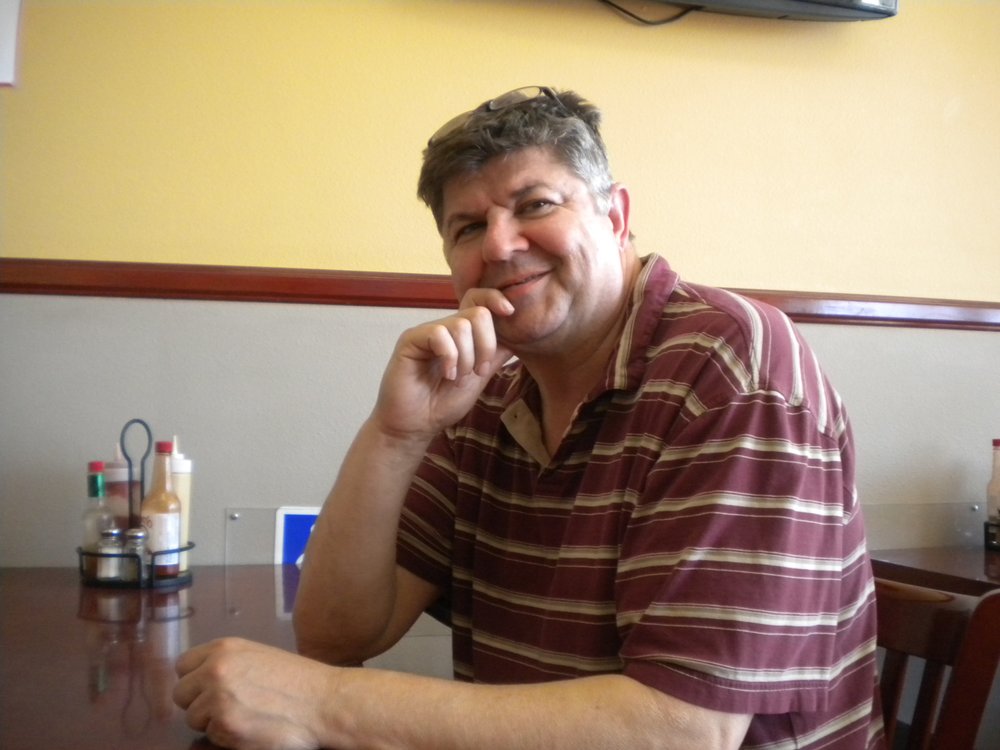 Jamal, the owner. The restaurant’s namesake is his son Ryan.

This place should be good at gyros: Ryan, the café’s namesake, is the son of Jamal, the owner, and Jamal’s originally from Lebanon, Beirut (“the Paris of the Near East,” he tells me). Jamal is a more rumpled version of Ryan, who has movie-star good looks. Bet the coeds from USD come down their hill in droves to order…anything.

Me, I’m down to a decision between the Ryan’s Special, a souped-up version of the $3.99 Breakfast Special, with scrambled eggs and bacon or sausage, breakfast potatoes, and toast, for $4.95; and that $4.99 omelet deal, an all-u-can eat with a choice of three items, or, for $6.99, six items. You get the usual selection of onions, peppers, mushrooms, bacon, sausage, and ham. A choice of cheese is also part of the deal.

I almost go for Kole’s cheeseburger, the kid makes it look so dee-lish. But, hey, it’s breakfast time somewhere, so I choose the three-item omelet, with onions, bacon and sausage, and Swiss. And a coffee ($1.50). Then that greedy side just can’t stay out of it, so I order a plate of breakfast potatoes ($2.75).

When the omelet comes, I can hardly get it down, it’s so filling. By the time I’ve worked my way through the ton of sausage and bacon bits, there’s no room for home fries.

It’s a talky kind of place. Jamal says he keeps prices low to attract starving students. Jesús, the student with the grilled-chicken sandwich, says Ryan’s has gotten him through four years of an accounting degree. He’s graduating this year. “And this sandwich has always been my favorite.” He looks at it like an old friend.

“I opened this restaurant 18 years ago,” says Jamal. “I used to be in hotel catering, but I hated my boss. Swore I’d never work for anyone else again. I have no regrets. But it’s hard work.”

Next time I’ll try his gyro. Can’t say this strip mall makes you think “Paris of the Near East,” or the Far West, either…but such a deal for such a meal! ■

I tried Ryan's on Saturday afternoon at around 3 PM. I went there specifically because I was in a Greek salad plus gyros mood. I just wanted take-out. The space is pleasant enough but was deserted, and I didn't want to be the sole diner.

I ordered a gyros plate. Unlike most restaurants offering such a plate, this one did not come with pilaf. It consisted of a salad with slices of gyros on top. A small plastic cup of balsamic dressing came along for the salad, and a similar sized cup of yogurt sauce was served for the gyros meat. The meal was accompanied by quartered pita bread.

Unfortunately, almost everything was disappointing. For $8.79, I received an ample portion of chopped romaine, 3 or 4 thin slices of tomatoes, strings of sliced red onions, a smattering of sliced California black olives, and about a tablespoon of crumbled feta. Atop this salad were several very dry slices of gyros meat.

First, the salad. Where were the cucumbers? Why was a balsamic vinaigrette served instead of an olive oil, lemon juice, oregano and garlic dressing? And no kalamatas? The gyros meat was flavorful, but dry. (Perhaps it had been sitting too long--I should have shown up during lunch hour when people would be ordering gyros sandwiches, and the meat would be carved often) Well, the yogurt sauce moistened the meat, but it had no seasoning--in fact, it seemed like plain yogurt instead of what in Greek restaurants is called "tzatziki."

Maybe the all-day breakfast specials are terrific or the burger that Bedford described. But avoid the Greek salad--there's nothing Greek about it! (How I was longing for the commingled flavors of kalamatas and feta!)

For a really good version of what I was looking for, try Apollonia, near UTC. Fresh, chilled veggies, large chunks of creamy feta, delicious dressing, moist, tender gyros, large purple kalamatas. And the price a mere buck more.