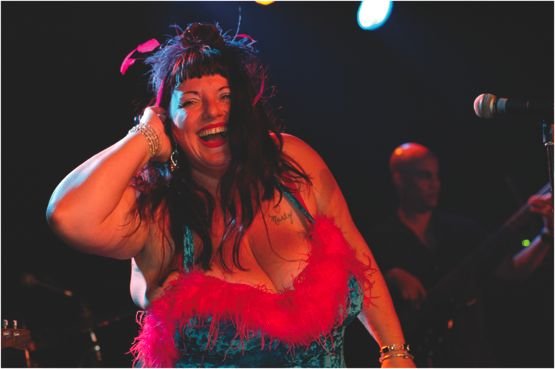 “I don’t know if this counts as acting,” blues diva Candye Kane says by phone from her Oceanside home. “I’m the narrator and I play myself.”

The Toughest Girl Alive, a play based on Kane’s as-yet unpublished autobiography, premiered January 15 at the Moxie Theatre and runs through February 6. Kane says she didn’t write the script. That part was handled by a friend, Javier Velasco, artistic director of the San Diego Ballet who adapted her narrative to the stage. She did, however, write the music.

Kane, 48, describes her theatrical debut as a multi-media event with live music, actors (including Bethany Slomka and Robert Kirk), and a slide show.

“The stage,” she says, “is set as a circus theme.” What better way to describe a childhood spent growing up in what she calls “the house of hysteria?”

Born Candace Hogan, Kane says her father was serving a prison sentence at the time of her birth. Later, to help make ends meet, her mother taught her to shoplift. The memoir touches on family members trapped in alcoholism and mental illness, her teenage motherhood, East L.A. gangs, drugs, and prostitution. And most of this, she says, took place prior to her early 20s.

“The only thing that gave me a reprieve from the house that I grew up in was music.”

She says what she calls her “legacy of survival” also kept her alive through a bout with pancreatic cancer in 2008.

But in The Toughest Girl Alive, art does not always imitate life. Kane says she’s portrayed her mother as more of a sympathetic character. “My mom is well aware and accepts responsibility for the mistakes she made as a young mother. She’s very different now than she was when I was a little girl.”