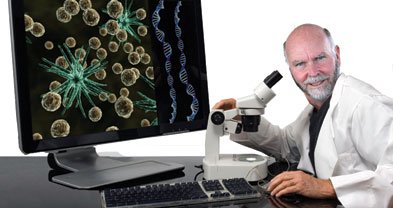 Whether famed UCSD alumnus and genetic-engineering legend Craig Venter will get to lease a parcel of choice UCSD campus land was set to be quietly taken up by University of California regents at their San Diego meeting this week. According to the notice of the finance committee’s meeting, to be held in closed session on Wednesday, January 19, the J. Craig Venter Institute is planning to build a “research facility” on unidentified property.

A proposal for Venter to set up shop on the campus has been on and off for more than three years. “Plans are underway to build a new, carbon-neutral laboratory facility on the campus of the University of California, San Diego,” said a June 2008 news release from the institute. “If funding can be secured to build this state-of-the-art facility, it will be the first laboratory building of its kind in the U.S. and will house approximately 125 staff and scientists.” At that time, the university announced that a 45,000-square-foot building, along with 140 parking spaces, would be built on a 1.9-acre site on UCSD’s “Scripps Upper Mesa.” The plan described “A one- to three-story building…[that] would terrace down from east to west and open up onto a pedestrian Belvedere Terrace overlooking the UCSD Park ‘Ecological Reserve.’”

Regents originally docketed a lease proposal for July 2007, but it was abruptly pulled from their agenda early that summer without explanation; a university source later said negotiations with Venter, the self-proclaimed master of genome sequencing, had not been completed. Since then, the majestic site near La Jolla Shores Drive north of the Birch Aquarium has remained in its natural state.

At the time of the 2007 announcement, La Jolla resident and computer consultant Tim Lucas protested the university’s move to develop the site into a private research park for Venter and others rather than preserving it for university research, saying, “This isn’t about science, it’s about making money via a commercial lease. UCSD is less interested in the research aspect of the project than they are in putting up the first of four or five buildings so they can collect big money.

“They had kind of a public meeting where they announced this project two years ago at the La Jolla Shores Association,” Lucas said. “There was a big audience there and people weren’t real happy, and a lot of them had a lot of questions that weren’t answered. Venter wasn’t there, but they had a bunch of Scripps Institution of Oceanography researchers there, saying they would get two or three fellowships out of this. I’m thinking, two or three fellowships? That’s not much.” Jim Thomas, an Ottawa-based Venter critic, worried about the lab’s safety, noting, “When you are cutting and pasting the genome, you should be very, very concerned.”

The university’s office of the president did not respond to a request for details on this week’s item; a spokeswoman for the regents said no documents would be made public until the committee took action.