Groove Kitties at Brick by Brick 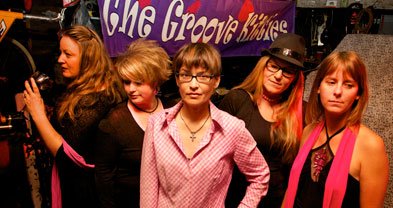 The quintet debuted in November, performing for over 10,000 people at the Susan G. Komen Race for the Cure. “We’re funky, folky, rocky, and bluesy,” says Claire. “It all depends on what mood we’re in on any given day. I prefer the funk, but that’s just me.”

“Our music runs the gamut of styles and genres,” says Beeks. “The common ground is the groove. As an added component of our live shows, we feature a different female songwriter at random events, backing them on a few of their songs and having them rock out with ours.”

Cathryn Beeks: “I only listen to local music, so stacked in my CD player are discs from Mike Moran, Lindsay White, Michael Tiernan, and Rusty King.”

Becky Fleming: “John Coltrane with Duke Ellington, Pink Floyd’s Dark Side of the Moon, Béla Fleck & the Flecktones, the Band’s Live at Watkins Glen, and the Yellowjackets. I especially love bands with horns. Go figure.”

Marcia Claire: “My CD player has an unreleased Carlos Olmeda CD that is so good. On the turntable is Ted Nugent’s Cat Scratch Fever.”

Garrison Bailey: “Pink, Kelly Clarkson, Dixie Chicks, Michael Jackson, Sheryl Crow, and Susan Tedeschi. I can’t get enough of any of them.”

Nancy Bee: “A mix CD with Björk, Depeche Mode, the Cure, and a few others.”

MOST EMBARRASSING MUSIC IN YOUR COLLECTION?

Claire: “Everyone’s got their guilty pleasures. Mine are Journey and Daughtry.”

Bailey: “Olivia Newton-John, ‘Let’s Get Physical.’ And I am not sorry!”

Beeks: “When I was ten, I used to sell birds from our aviary at a local feed store’s auction.”

EVER BEEN INJURED ONSTAGE?

Beeks: “Peed myself once, but let’s keep that between you and me.”

Fleming: “I was playing in the pit orchestra for the musical Annie, and in the middle of a song, the dog fell offstage and onto our heads.”

Bailey: “I wore a ring on my finger onstage, and the friction of playing drums all night caused the biggest blister.”

Beeks: “Ani DiFranco puts on a nice show, and the way she connects with the audience is emotional and honest.”

Claire: “Béla Fleck and the Flecktones, 2002, at the Wiltern Theatre. I’ve never seen anyone like Victor Wooten who takes that sort of command of the bass guitar. I was in tears.”

Bailey: “Maroon 5 did a cover of an Alicia Keys song, and it was breathtaking.”

ANY FEARS OR PHOBIAS?

Fleming: “I’m afraid of bees. I was swarmed when I was little, after I stepped on a nest.”

Bailey: “Tarantulas. I will shoot you with a gun if you bring one within the city limits of my being, and I’ll be just fine going to prison for it!”

Fleming: “I want to travel to Zimbabwe. I’m in another band that plays music from there.”

Claire: “Perhaps a little streaking. Nobody’s streaking anymore, and that bums me out.”

TWO THINGS WE DON’T KNOW ABOUT YOU?

1) “I used to pitch horseshoes, semiprofessionally.”

1) “I can cross my toes the way most people cross their fingers.”

2) “I had eight teeth pulled and four years of painful braces.”

HARDEST THING ABOUT BEING A FEMALE ROCKER?

Beeks: “There are no boys to carry our gear.”

WHAT WOULD YOUR GRADE SCHOOL TEACHER SAY ABOUT YOU? Beeks: “She hasn’t realized her potential yet.” Claire: “She’s still so chatty!” Bailey: “That I would never amount to anything. Wish they could see me now.”

WHICH SONG BEST DESCRIBES YOUR LIFE? Claire: “‘Light You Up’ by Shawn Mullins; ‘I just want to light you up, like a fire.’” Bailey: “‘I’m Gonna be Somebody’ by Travis Tritt.”