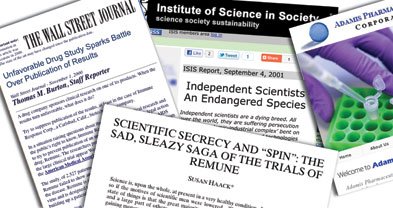 The Reader has received from Dr. Zanetti a copy of the court order dismissing the case Cosmo Bioscience Inc. vs Adamis Pharmaceuticals dated February 21, 2013, with prejudice.

The order states: "The Court hereby lifts the stay of this action. The Motions of Defendants Maurizio Zanetti and Adamis Pharmaceuticals Corporation to Dismiss the Action are GRANTED."

Lonely hearts counselors have always disagreed on how much you should reveal to a potential spouse about your sometimes-sinful past. In today’s scandal-pocked environment, Wall Street, Corporate America, pinstriped lawyers, regulators, and politicians preach that “full disclosure” and “transparency” are the best medicine for fighting wrongdoing. Unfortunately, in all too many cases, those are hollow words.

A lawsuit being heard in San Diego Superior Court may shed light on whether full disclosure is really as respected these days as cheerleaders claim.

Curtis Leahy, a Los Angeles investor, and two colleagues are lead plaintiffs in a class-action suit against San Diego–based biotech Adamis Pharmaceuticals, its chief executive Dennis Carlo, its chief financial executive Robert Hopkins, and several others. My calls to Carlo and Hopkins were not returned.

Adamis Pharmaceuticals is not doing well. In its latest six-month period, the company had zero revenues because its line of antihistamine/decongestant products is not selling. The company continues to pile up administrative expenses and is doing a very modest amount of research and development. The official address for the company is a U.S. Postal Service box in Del Mar. Adamis has an accumulated deficit of $21.6 million. “The company has negative working capital, liabilities that exceed its assets and significant cash flow deficiencies,” the company admits in its most recent quarterly filing with the Securities and Exchange Commission.

Adamis says it can give no assurance that it can raise the necessary funds to meet business objectives, although after the quarterly report was filed, one Ahmed Shayan Fazlur Rahman, who lives in the United Arab Emirates, bought 24.9 percent of the company.

The Leahy lawsuit charges that the defendants violated California corporations code laws and common law by not disclosing shady past dealings that potential investors should have been informed of. Allegedly questionable activities should have been revealed in private placement memoranda that solicited investors in 2006 and 2008 and in a proxy statement of 2009, when the company went public by merging with a company that was basically a shell.

There are several charges in the suit, but two stand out. First is the activity of Dennis Carlo prior to his joining Adamis. Carlo worked with the late, renowned Jonas Salk on a proposed vaccine for AIDS, utilizing the approach Salk had used for a polio vaccine. In 1989, the company that resulted from their research, named Immune Response, intended to go public at a time when AIDS stocks were hot. The market didn’t like the deal, though, and it was 1990 before Immune Response finally made it to market at a price much lower than planned in 1989.

Carlo and Salk got shares in Immune Response for one-fourth of a cent apiece. (Carlo got his Adamis shares for one-tenth of a cent each, with the chance of selling them back to the company.) Initially, Wall Street hoped that Immune Response would come out with a workable AIDS vaccine, but ultimately highly publicized trouble arose.

In official Adamis documents, says Leahy’s suit, Carlo “was portrayed as a cofounder and chief executive officer of a once prominent San Diego–based pharmaceutical company,” but the documents did not disclose “that while serving as [chief executive] he allegedly covered up adverse scientific findings about the effectiveness of an [AIDS] drug [called Remune] that his former company had spent millions of dollars developing” or that he was “sued for securities fraud and, along with the company and another officer, settled those charges for $10 million.”

Actually, the matter became a cause célèbre in the scientific community. A University of California San Francisco medical professor, who, along with a Harvard colleague, had been hired by Immune Response to be chief investigator during drug trials, declared that Remune was not effective. He even published his negative findings in the Journal of the American Medical Association in 2000. Immune Response sued the San Francisco university for $7 million to $10 million. The school stuck by its guns, and its scientist was lauded by colleagues for not selling out. Eventually the suit was settled without Immune Response getting any money.

In 2001, ten securities class-action complaints were filed against Immune Response charging false and misleading statements about the efficacy of the company’s anti-AIDS vaccine. The suits were consolidated into one action. Finally, Immune Response settled the suit by paying $10 million plus hefty legal fees. “There is no evidence to suggest that the settlement amount is not fair and reasonable,” declared the late federal court judge Napoleon Jones Jr. in 2007. Immune Response went into Chapter 7 liquidation bankruptcy in 2008.

Carol Lynn Thompson of the Sidley Austin law firm in San Francisco, representing Adamis, argued in a recent filing that under California laws neither Adamis nor Carlo “owed a duty to disclose” the information to potential investors about the Immune Response lawsuit, which was ultimately settled without any admission of fault or a finding of liability.

But Los Angeles–based attorney George Shohet, representing the plaintiffs, cites cases showing that “ ‘half truths’ may require full disclosure.” Adamis boasted to investors in filings that Carlo “was a super-successful biotech executive,” Shohet told me. But under securities law, “If you talk about something, you have to talk fully. If you don’t tell the other side, it’s fraudulent.” It appears to be a case of Adamis arguing the letter of the law and the investors arguing the spirit of the law.

The second major charge in Leahy’s suit regards Adamis’s relationship with Dr. Maurizio Zanetti, a professor of medicine at the University of California San Diego, serving as Adamis’s research advisor. Zanetti supposedly has developed technologies for treating viral diseases and cancer that he purportedly licensed to Adamis, including a possible cancer vaccination.

However, potential Adamis investors in 2006, 2007, and 2008 filings were not told “of pending litigation, competing patent and licensing claims, that made the development and commercialization of the Zanetti technologies impractical and uneconomic,” according to the suit. An Italian company, Cosmo Bioscience, and affiliates raised millions in 2005 from European investors to develop the Zanetti technologies, says the suit. Zanetti’s relationship with Cosmo later soured, and he turned to Adamis. But Cosmo continued asserting its licensing claims and this year filed a suit against Adamis and Zanetti seeking to invalidate Adamis’s licensing rights to Zanetti’s technologies. “Investors didn’t get told about the competing claims out there,” said Shohet. An Italian arbitration panel is now studying the matter.

Cosmo says that Zanetti wrongfully terminated the Cosmo relationship and improperly licensed his technologies to Adamis. In its latest quarterly report, Adamis says that both the Cosmo and Leahy suits are without merit. I left calls to Zanetti that were not returned.

I tried to get information from Adamis’s attorney, Thompson. “As a matter of policy, we do not comment on the details of pending litigation matters to reporters,” she replied. That was the only response I got from anybody connected with Adamis, whose stock sells for 21 cents. But referring to that latest quarterly report, she said she was confident that both the Leahy and the Cosmo suits were meritless.

I am sort of surprised you new of his death.......most people would not know this.

Sure, I thought I remembered hearing the news when he died, although I couldn't have told you the date. Then I googled his name to make sure he was dead and that my memory was not misleading me. Now, SurfPup, give us your opinion: should the Immune Response debacle with Remune been revealed to Adamis investors? Should the claims by Cosmo Bioscience have been revealed to investors? I think so in both cases, but I am not a lawyer. I'm just a journalist who tub-thumps for full disclosure. Give us your wisdom. Best, Don Bauder

When in doubt disclose. Simple rule that never lets you down.

Jones death was on the San Diego- southern districts- website, I dont recall it being in the UT, but maybe it was. I thought most people would not have heard unless thye were on the courts website......

u can come thump on my tub any day of the week pooh!!

and not to get all religious and such on y'all but

St. Thomas Aquinas preceded the arrival of the Securities and Exchange Commission by several centuries. After 47 years following SEC filings, I have never seen a divine disclosure. I have seen many that were anything but divine. Best, Don Bauder

Through a strange twist of circumstances I occasionally become a fly on the wall at some gatherings of the local swells. With one such event fairly fresh in my mind, I always come away from such events with the same overwhelming impression: Every single one of them is blissfully unaware that they are completely superficial--they are so accustomed to lying that they are deluded by their own line of bs. A few speeches of self-congratulation and congratulating each other consisting of a farrago of apple-pie generalities generated, apparently, by a speech-generator program. An endless proliferation of "awards programs."

Like some kind of weird PTSD victim, each possesses that strange 1,000-yard stare (See "Invasion of the Body-Snatchers"), a kind of fear-on-steroids, a kind of paranoia so internalized that they have become numb to it. They drift from flock to flock of their kind, much like the electronic dummies run by incredibly well-programmed computers (See "The Stepford Wives" and "A Boy and His Dog).

They are thus stamping out the vintage and the grapes of wrath are running red and sticky, from cups that runneth over, staining the soil with the blood and brains of the innocent. Yea, they know no evil, for theirs is the kingdom and the glory forever.

Have a look at this piece:

Larry Beinhart is the author of "Wag the Dog," "The Librarian," and "Fog Facts: Searching for Truth in the Land of Spin." His latest book is Salvation Boulevard.

Yes, politicians, in particular (but also business executives and financial bigwigs), tell whoppers so often that they aren't even aware they are doing so. Best, Don Bauder

Post #7 by Twister-excellent. Funny when other people have the exact same thoughts as yourself.......

JC didn't say the money-changers couldn't change money, he just tossed them out of the temple.

As to CCDC, (See Jan 5) as big a pothole of our credit-cards tho it may be, it is the PRINCIPLE, so well stated by you, that is a the core of all scams. Since this applies to the current blog too, I'm gonna double-post it, if our honorable moderators will kindly permit such a transgression . . .

We must get across to the voters what a scam CCDC is. Best, Don Bauder

How? Hold people down and read them your column until they get it?

Getting the message across will be very difficult. The mainstream press in its entirety has swallowed CCDC's propaganda. Best, Don Bauder

"We prohibit profanity, libel, spam, racial epithets, and the harassment and abuse of others." --Reader posting rules

Did Barnum say that? I am not surprised if he did. Some Roman leader also said that the people would remain content if they were given bread and circuses. Best, Don Bauder

To the best of my fallible memory. If not it wouldn't be the first time I was humbugged.

We all get humbugged from time to time. Best, Don Bauder