“Cupboard’s bare, buddy. We have to stretch it till Friday.” 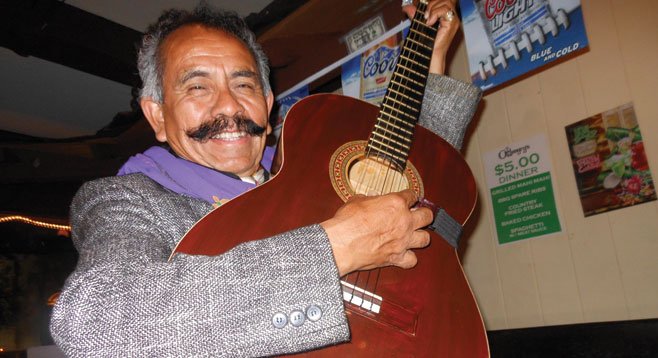 Krizanto sings his heart out.

I chomp into my $5 dinner: ribs, carrots, broccoli, blob of mash, white-bread bun, and butter. Take a slurp of my $1 beer.

Yeah, one Washington. In Old Town. I couldn’t believe it, either.

Somehow, I’d ended up in Old Town at 7:00 p.m. Hungry, but tapped out. Two Lincolns. That’s it. Earlier, Carla had warned me: “Cupboard’s bare, buddy. We have to stretch it till Friday.” So I was avoiding the whole tourist-trap thing, the tourist-trap prices. I left the plaza, crossed Twiggs, hit San Diego Avenue, and there — right on the corner — was O’Hungry’s. 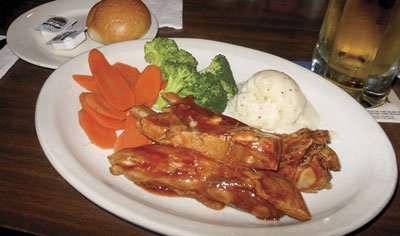 I know it’s been around for a while, like, 35 years. First time I came here was in 1997, with my buddy Ted. We ended up having a yard-of-ale contest. ’Cause this is where they keep those yards of ale, in way-stretched lager glasses. But you have to watch the treacherous bulb at the bottom. It can ruin your day and wash your face, too, just when you think you’ve got the yard licked. I’m talkin’ about 50 ounces — that’s four 12-ounce cans. Might not sound like that much, but it feels like somebody’s filling the other end as you drink. And, to be honest, we were only doing half-yards. 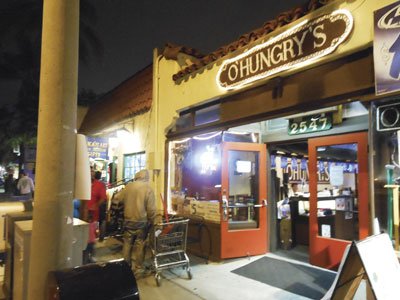 Actually, I don’t even look in. There’s a sandwich board on the sidewalk with “specials” written in green, but I carry on with the river of people moving up San Diego Avenue. I’m heading for Old Town Saloon. Maybe they have some cheaper-than-tourist-trap food.

I go in to the old-time drinkin’ saloon. But what the…? They don’t do food.

Now, something I only half-registered comes back to me. The sign outside O’Hungry’s: Did it say “$5 Dinner”? Nah…no way.

I go to the corner of Twiggs, and there it is, plain as daylight: “O’Hungry’s Dinner Special: $5 dinner. Baked chicken, ham steak, country-fried steak, mahi mahi, spaghetti, BBQ ribs.”

This is doable, if there aren’t any hidden extra charges.

I’m inside in a Road-Runner moment. It’s part Wild West, part waterfront, with wooden floors, wooden chairs and tables, and a timbered ceiling. 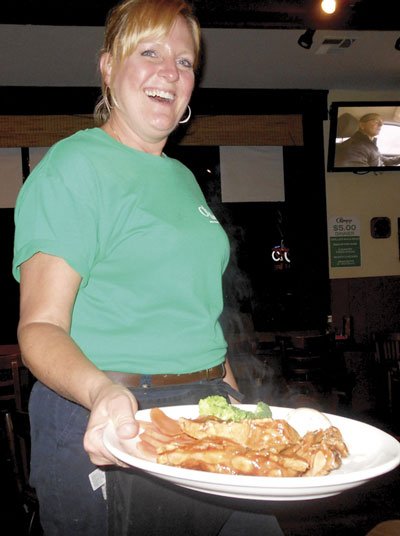 “Tonight it’s carrots, broccoli, and mash. And bun and butter. Anything to drink?”

Beer comes first. Ah…cool, sparkly. This is when I notice the guitarist going from table to table, asking customers if they’d like to hear a tune. Everyone seems to be from the Midwest, a tour, maybe. They act like he’s trying to sell them real estate on the moon.

Andrea arrives with my meal. Three large ribs and the veggies. The ribs are fine. Not totally Texas BBQ rip-roaring flavorful, but juicy, tender, and filling, ’specially with the veggies to round them out.

I’m chowing down when the guitarist passes my table. So far, he’s had no takers. I say, “How ’bout ‘La Malagueña’?” Figure if he’ll take $2, I can afford him.

And guess what? He launches into the finest rendition I’ve ever heard of that song. Haunting. The guitar work. The clear, passionate voice.

Dang. Are those tears in my eyes? (Can’t be the beer, it’s Bud Light.)

I apologize for the measly two bucks. The guitarist — his name’s Krizanto — accepts them gracefully. Says he sings all around Old Town. What a treat.

“Secret is, take it slow,” she says. “Especially the last part. Because I have to do the cleaning up.”

Turns out drinking yards of ale is an ancient custom. Like, 1600s. England. Bet Will Shakespeare quaffed a few of what they called “the Cambridge Yard.” But, mostly, it was a refresher for stagecoach drivers while the horses were changed. Aussie prime minister Bob Hawke became famous when he downed the 2 1/2–3 pints in 11 seconds, when he was studying at Oxford University. It was the world’s fastest. (The Guinness Book of World Records says it’s down to five seconds now.)

I pinch myself. For eight bucks I’ve wined (okay, beered), dined, and had a live rendition of my favorite Mexican song. All on a prime corner in Old Town.

“Stan? Stan Chu? He knows these are hard times, and he needs to meet his customers halfway.”

*Stop the press! New Year’s Eve, they’ll have the $5 dinner. Save big on your celebration! ■