Chris Cornell Opens His Songbook at the Balboa Theatre 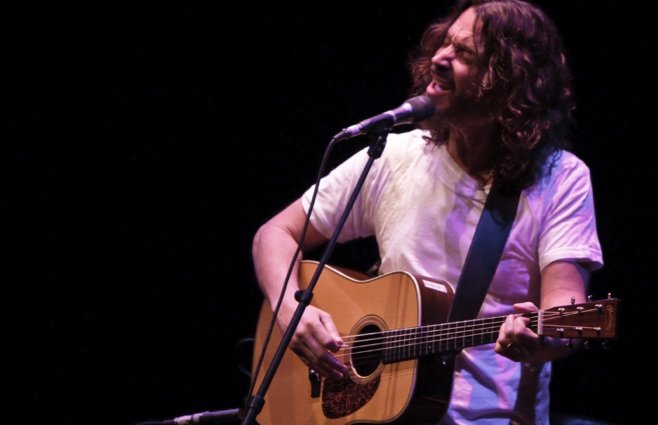 Chris Cornell finished out his 2011 Songbook tour playing to a sold-out crowd at San Diego's Balboa Theatre. Cornell, the former frontman for Seattle alt-rockers Soundgarden, as well as Audioslave and Temple of the Dog, has one of the most distinctive voices in rock music. He is also an accomplished guitar player. The Songbook tour is a solo acoustic tour, but there is still a feel of the Seattle grunge-rock that Cornell helped popularize.

Cornell covered songs from his entire career, including Temple of the Dog's "All Night Thing," Soundgarden's "Fell On Black Days," and Audioslave's "Be Yourself." Selections from his solo career included "When I'm Down," "Cleaning My Gun," and "As Hope and Promise Fade." Covers included the opening song, "House Where Nobody Lives," by National City's own Tom Waits, Led Zeppelin's "Thank You," and Michael Jackson's "Billie Jean." He also did an abbreviated improv version of "Freebird" at the request of the enthusiastic crowd.

Given the chance, Cornell would probably play all night. He played over 30 songs, including a five-song encore, which included "Black Hole Sun," "Call Me a Dog," and three John Lennon/Beatles covers, including Lennon's "Imagine" and the Beatle's “You've Got to Hide Your Love Away,” ending the night with "A Day in the Life."