Rewind the Clock to the Ghosts of Seasons Past

He’s nostalgic for something that’s gone, not hopeful for what could be. 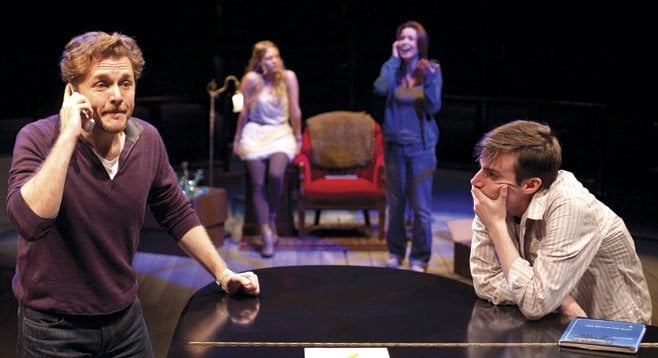 Jacob Marley’s isn’t the only Ghost of Christmas Past. Everyone probably has a few. They may not arrive in chains, shaking a bony finger at the void, and whispering “beware.” In fact, they may be recollections so fond they’re painful. The season conjures the ghosts of seasons past. That’s the premise behind Some Lovers, a world premiere musical by Burt Bacharach (music) and Steven Sater (book and lyrics) — that and you can’t “rewind the clock.”

Molly met Ben 20 years ago on Christmas Eve. She was a waitress in an Italian restaurant where he played a piano. Something clicked. Suddenly Ben’s writing all kinds of songs, each inspired by Molly, including the hit that puts his name, briefly, in lights. But it’s clear from the start that Ben needs Molly more than he wants her: she’s his muse first, then his beloved, and always plays second fiddle to his composing.

Flash-forward 20 years. Ben and Molly have separated. He’s unable to compose without her. She’s had hard financial times and must leave New York. As she faces the end of an era, they recall a holiday tradition: Christmas Eves at the Plaza Hotel, where they read O. Henry’s “Gift of the Magi” to each other.

In the story, Della and James are so poor their furnished flat almost qualifies for the “mendicancy squad.” The “two foolish children” sell their greatest treasures — his watch chain and locks of her hair — to buy gifts for each other: pure tortoise shell combs, and The Watch. O. Henry says their extreme sacrifices make them as wise as the magi.

As in a play by Alan Ayckbourn, Some Lovers takes place in multiple dimensions. Young Ben and Molly share the stage with older Ben and Molly. They become, for each other, Ghosts of Christmas Past and Future.

Della and James make almost a third couple, since their story unfolds, a section at a time, during the 95-minute, intermissionless musical.

Sater, who wrote the book and lyrics for the Tony Award–winning Spring Awakening, makes good use of the cross-referencing, at first. The young lovers look at what they’ve become and comment. The older ones look back. They recall the sparks of love and conflict. The technique gives the older Molly a line you’ll never hear in real life. She tells her younger self, “God, you’re boring. No wonder he left me.”

And how many can weave them into what feels, in some ways, like a single song, or Goldberg Variations on a theme? The songs both break away from and then echo each other. In effect, they do what the book does: pit then against now, musically, and the differences resonate.

Bacharach gives each performer at least one knockout number. Young Ben (Andrew Mueller) gets the rocker, “Welcome to My World”; Young Molly (Jenni Barber) picks up on the Christmas Past and Future theme in “Living with a Ghost”; Ben (Jason Danieley), “A Thousand Things That Were You”; and Molly (Michelle Duffy) gives the showstopper “Just Walk Away” a hint of Dionne Warwick.

(In an interview, Bacharach said Some Lovers isn’t autobiographical — but, in the story, Young Molly complains that Young Ben writes only for “that girl,” who is by far the best interpreter of his songs; for years, “that girl” for Bacharach was Dionne Warwick.)

Because the music often references itself, especially the beginnings of songs, parts tend to feel repetitive. That said, the score, much more often than not, is a wonder. The problem is: the characters aren’t worthy of the music.

Look past Sater’s ingenious double-pairing and Ben and Molly are little more than generic types: whether young or old. He hasn’t changed in 20 years, yet we’re supposed to believe he finally will? Does he want an adult relationship or just to “rewind the clock”? The music almost convinces that he might want the former, but his pattern of behavior — music first, Molly a distant second — suggests otherwise. He’s nostalgic for something that’s gone, not hopeful for what could be.

And Molly? Take away the “Gift of the Magi” stuff, which feels tacked onto the narrative (and reeks of guilt on his part), and one wonders how she could give Ben near-unconditional love for so long. They had a neurotic interlock, not reciprocated love. The music and Sater’s strongest writing build a convincing case against their reconnecting. Too many of her observations (“nothing left but the tears”; “who we had to become to make room for each other”; “he killed Christmas”) suggest she should cut bait and head to Michigan after all. ■