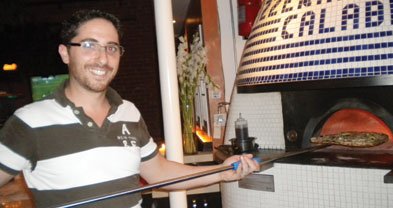 ‘Fresh mozzarella?” says Giancarlo. “You eat it like a soft apple, while it’s still warm, and the warm milk oozes out and runs down your face. That’s the fresh mozzarella you can get in Italian pizzas.”

He has a faraway look in his eyes. He’s back in Caserta, north of Naples.

Then his eyes dart to the oven. “But we’re almost as good. See? Between 55 seconds and one minute, 15 seconds. That’s all it takes to bake a pizza in this oven. It’s about 1000 degrees in there.”

It’s 9:00 on a Wednesday night, and I’ve dropped in to North Park’s coffee showplace, Caffé Calabria, because I heard they were doing pizzas now. Plus, Carla’s working late and is threatening to order in from one of the pizza delivery chains. Hell, no. Last time, it was $35. This has to be cheaper, even if it is designer pizza.

Coming in, it feels all low-light Dolce Vita Roma chic: black counters, black tables, black tile floor…I almost get a black eye when I trip over a table leg. But once I get used to it, I see they have trees all the way down a kind of interior street, with white faux windows set into the mustard walls. La Strada! All you need to complete the picture is washing strung across it.

Then there’s that great big oven. It’s shaped like a white beehive with blue rings around it and has “Pizzeria Calabria” written out in mosaic between the stripes.

The flames inside roar. Gas?

“No gas!” says Giancarlo. “This is a pure wood-burning oven. Stefano Ferrara — he’s maybe the most famous wood-burning pizza-oven-maker in the world — he came over from Naples, the ancient home of pizza, and built it right here. And we use only oak, because it burns hot and gives its own flavor. The pizzas you get here are identical to Italian pizzas in just about every way. We even fly our tomatoes over from Naples.”

Wow. Turns out they’re San Marzano tomatoes, originally a gift from the kingdom of Peru to the kingdom of Naples, back in 1770. Their taste is much stronger —out of the ballpark, compared to the cardboard critters we get from Vons — sort of bittersweet. Giancarlo says they’re the only tomatoes that should be used in a true Neopolitan pizza.

They’re also molto fussy with their cheeses. They do some pizzas with fior di latte, mozzarella from cows’ milk, others with mozzarella di bufala — yeah, cheese from water buffalo. Returning Crusaders brought the animals back to Italy from the Holy Lands, and their milk is the best for mozzarella.

I settle in at a table. The bench seat is slippery, polished black wood. No cushions. The menu choices are…not the cheapest. Like, it’s $11 for a Caprese salad, which is tomatoes, burrata (a creamy mozzarella), oil, and basil. Bresaola, “thin-sliced dry aged beef,” with grana (another kind of cheese) and arugula, runs $9. “Salumi misti” is a mix of salted, cured meat, comes with grana cheese, green olives, and flatbread. It’s $12.

“Pizze” — pizzas — are one size, about 12 inches. Flavors range from a straight marinara (tomato paste and cheese) for $10, to a Margherita for $15. I crank through the 15 choices. Salsiccia ($14) is strewn with fennel sausage. Vegetariana ($12) has seasonal veggies, like yellow and green squash, mushrooms, artichoke hearts, fresh mozzarella cheese, and ricotta and grana cheeses. Quattro Staggioni ($13) has prosciutto and veggies. I almost go for the Napolitana, because it’s only $11, and has anchovies.

In the end, I get the Carbonara ($14). It has a cream base (okay, I’m sacrificing those San Marzano tomatoes) and an egg on top; in between, there’s speck (juniper-flavored ham chunks), cheese, and stalks of asparagus. Pricewise, I know I’ll be taking home at least half to Carla — $7 apiece. In fact, I get a little giddy and order a quarter carafe of house white wine ($7), so I can play the role of suave Neopolitano having a European dinner for one. Dividing it all by two, that would be $10 each. Not bad, but I can’t help wondering what ever happened to street food for the poor dude.

Arne Holt, who owns Caffé Calabria, started back in 1991 with a coffee cart on the sidewalk at Grossmont Hospital. He pushed himself to learn coffee-roasting, became king of the coffee-roasters, then moved to this place. Then he became interested in Italy; he traveled there, a lot. The philosophy of fresh, local, organic, and less-is-more rubbed off. Ergo, minimalist pizzas. One size, thin crust, fresh everything.

Bottom line is, Italian pizzas are not nearly as loaded up as most American-made pies.

“Neapolitanos like their pizzas thin, and sloppy in the middle,” says Giancarlo. He’s hauling mine out after its full 75 seconds in the fire. “And they like everything fresh.”

“Occhio di bue!” says the waitress as she picks up the pizza and delivers it to my table. She points to the egg with the yolk in the middle of my Carbonara. Her name’s MJ, MaryJo. Spent six months in Italy. Loves it. Works here because it’s the nearest thing we’ve got to Italy in San Diego.

She doesn’t roller-cut my pizza into slices. “That’s not done in Italy,” she explains. “We only cut up pizzas if, say, a family asks. Individual customers like to cut and rip pizzas their own way.”

I come out at about 11:00 p.m., after finishing off with a $1.65 espresso to keep me awake. Feel like I’ve been in a foreign country. I catch a Number 2 bus, heading downtown. Still have two-thirds of the pizza in a box (maybe the artiest pizza box in town). I call Carla. She’s home, but only just. Gonna be a late supper for her.

I watch North Park, South Park bounce by. Think about the experience.

Arne Holt has taken pizzauthenticity to a new level. Maybe, though, it has the tang of being a little…what? Spartan? Doctrinaire? Like, whatever Naples does has to be right? On the freshness and flavor front, that’s great. But I’m glad the New World has its crazy ideas for pizza, too — thin, thick, flavors like pineapple — no matter how much the purists may gasp.

Would I go back? In a heartbeat, if only to taste those tomatoes, to learn what our New World tomatoes used to taste like. ■