Surf's up at La Jolla Shores, but your wallet’s gone

They lurk on the hillside above Scripps Pier 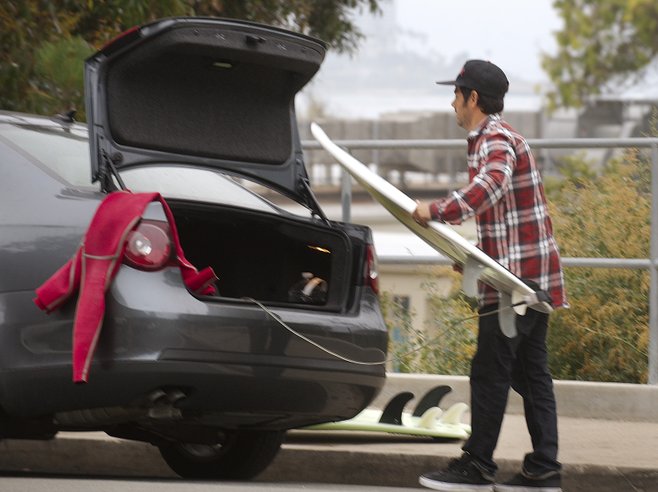 "Do you hear that? Is that my car alarm?” Gus Neves asked as we walked up Naga Way to La Jolla Shores Drive after an early morning surf session at Scripps Pier. We rounded the corner and saw a young man in a dark hoodie and baggy jeans standing in a pool of shattered window glass and rifling through the backseat of Neves’s 2011 Volkswagen Jetta.

Barefoot and in full suits, we ran toward the car, yelling. The thief looked at us, then bear-hugged as many items as he could fit into his arms and ran to a blue Saturn. He jumped in the passenger seat. Before the door closed, the car peeled out, nearly clipping a sports utility vehicle. We ran the remaining 30 feet and stopped in the road to watch the crooks drive south on La Jolla Shores Drive. The car alarm continued to blare, but passing drivers just looked at us. A small red and black screwdriver lay on the ground next to the shards of glass.

As we waited for a police officer, a woman holding a brown Chihuahua walked up. She told us her car had been stolen: a blue Saturn sedan.

An hour later, officers located the stolen car, abandoned on a side street off Calle del Oro, in front of Irwin Jacobs’s mansion. The crooks made off with a new Apple MacBook, a Tutima watch, and a Sony camera. The items were worth approximately $4000.

“I have friends who had their car broken into while surfing at Scripps, but nothing had ever happened to me,” said Neves a month after the break-in. “I guess it was only a matter of time.”

La Jolla Shores, a busy upscale neighborhood, offers one of the city’s most popular beaches, is home to the Scripps Institution of Oceanography, borders the campus of the University of California San Diego, and is a hot spot for car burglars.

They lurk on the hillside above Scripps Pier, watching as a surfer hides a key inside a bumper or wheel well. They patrol the residential streets farther south, as if they were looking for a parking spot. Once a target is spotted, it takes thieves just minutes to slide a screwdriver into the window jamb, pop the window, open the door, and take wallets, iPods, phones, and anything else of value. The crooks have three escape routes: head north on La Jolla Shores Drive to La Jolla Village Drive; head south on La Jolla Shores Drive to La Jolla Parkway; or head east on Calle del Oro — a winding, residential street — to Torrey Pines Road. The freeway is minutes away.

Shards of auto glass — evidence of the break-ins — speckle the sidewalks at the northern end of La Jolla Shores Drive, near Scripps, where the street is fast-moving and flanked by shrubs and hillside, as well as at the southern end of the street, in the residential neighborhoods full of multimillion-dollar homes.

Ben Jerman grew up surfing in La Jolla. On July 1, the busiest beach weekend of the year, Jerman drove his Ford Ranger to La Jolla Shores to surf. The beach was crowded. The residential streets around the Shores were the same.

Drivers circled the neighborhood blocks, watching for someone walking back to a car, hoping to get the parking space.

Jerman got lucky. He found parking on Paseo del Ocaso, a short walk to the beach. The waves were inconsistent that day, and Jerman brought two boards, his 8´ longboard and his 5´4˝ Steve Seebold quad shortboard. Opting for his longboard, Jerman locked his quad in the cab of his truck.

After 35 minutes of surfing, he got out of the water to get the quad. But it was gone. Thieves had popped his door lock with a screwdriver and taken the board, which was worth about $400.

Since then, Jerman has filed a police report and searched for his board on Craigslist and in used sporting goods stores. No luck.

“It was crazy because it happened on such a busy weekend,” he says. “There were people everywhere looking for parking. I’m not sure how they could break in to a car or a truck with so many people around. You’d think someone would see them doing it or they would be worried about getting caught.”

It’s possible the thieves aren’t worried because they know from experience they won’t get caught. “Scripps [surf spot] has always been one of the most problematic areas for car thefts in La Jolla Shores,” says Lorraine Schmalenberger, president of the La Jolla Shores Surfing Association. Schmalenberger says more and more stories about vehicle break-ins are floating around the Shores.

During the past three years, a car is broken into, on average, nearly every week in La Jolla Shores. From July 2008 to June 2009, there were 54 vehicle break-in calls to police. The following year, there were 46, and between July 2010 and June 2011, 50 car break-ins were reported.

“We see a high number of car burglaries and car thefts in that area, not just at the La Jolla Shores parking lot but the entire area,” says Boyd Long, an assistant chief at the San Diego Police Department. “We know that people have become targets down there. Crooks know people may be gone for several hours at a time. All they have to do is wait until they are gone.” 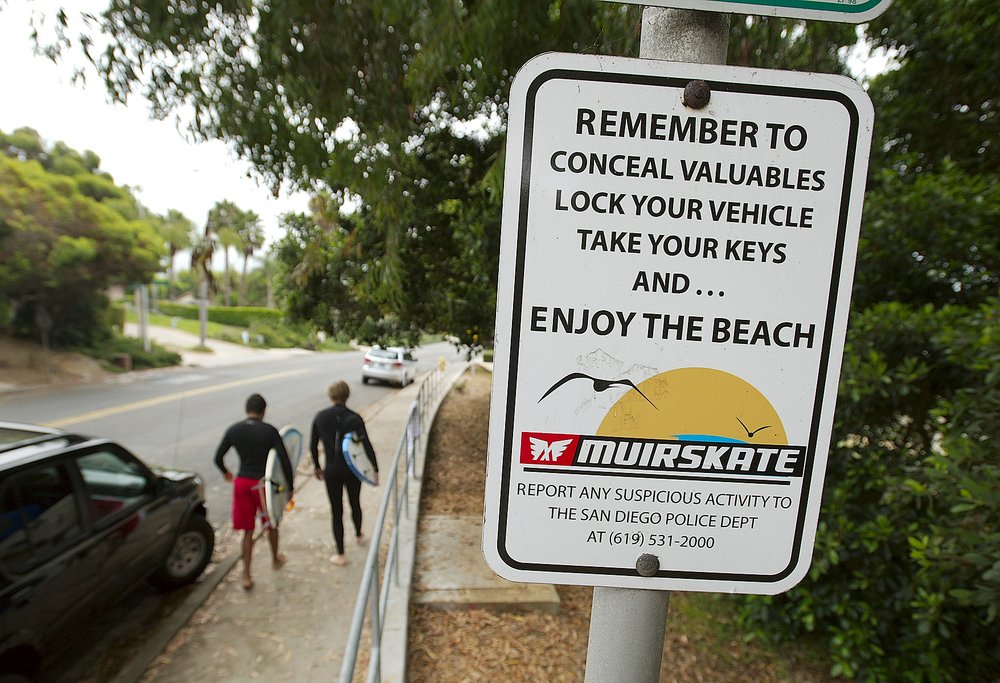 Authorities can do little more than warn beachgoers when it comes to car break-ins in La Jolla Shores.

Despite police efforts to warn the public at community meetings, says Captain Al Guaderrama of the Northern Division, beachgoers continue to leave their belongings in plain sight. “We try to get the word out and increase patrols, but surfers are leaving valuable items right in the seat of their cars. Crooks are watching them go into the water, knowing that they are leaving their belongings in the vehicle.

“It takes just a minute or two for some of these individuals to break in and grab belongings. It is very quick how they can do this, especially for some of the experienced ones.”

The police department sends members of the Retired Senior Volunteer Patrol to drive through La Jolla Shores and, on occasion, to distribute “report cards” to educate people on the security of their vehicles. But police say that the layout of the area and the speed with which crooks can finish the job make the break-ins nearly impossible to stop.

“I just keep telling people to stop leaving valuables in the car,” says Alan Alvarez, public information officer for the northern division. “It’s common sense. After all, it is just a piece of glass protecting your stuff.”

This is a great article to shed light on whats going in the La Jolla Shores area. The police need to set up some kind of sting operation. I just had my truck broken into last week on the corner of Paseo Del Ocaso and La Jolla Shores Drive. They stole everything of value, i.e. Apple Iphone, Itouch, and Ipad and the police wouldn't even come out and make a report, I had to go online and file a report. I wanted the police to dust for prints or do something. If nothing is being done but a warning from the police chief to lock your stuff up (which is what us victims have been doing) then we need to take it upon ourselves to do something. You can bet next time I'm going to do something. I have been going to La Jolla my whole life growing up surfing there and the surfing community has noticed an increase in this type crime.