Engaging Shaw at the Old Globe 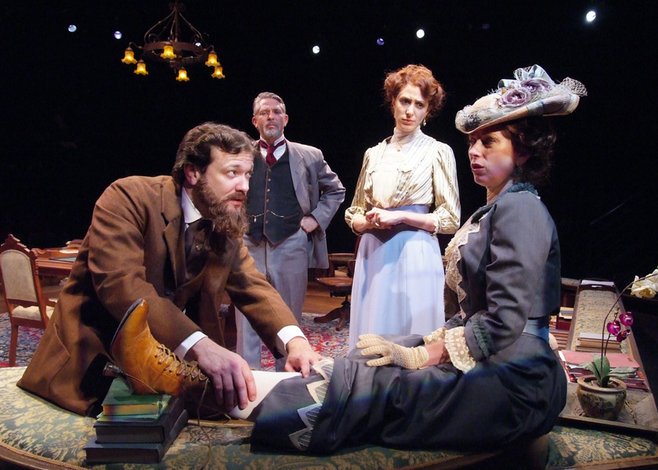 “George Bernard Shaw” may have been his best fictional creation. The cantankerous genius loved to rant, like a spoiled brat, and turn conventions upside down. He renounced capitalism, organized religion, and social injustice, along with “flesh, fish, fowl, tea, coffee, tobacco, or spirits.” The vegetarian once proclaimed “a man of my spiritual intensity does not eat corpses.”

For most of his 94 years, he also renounced sex. A virgin until age 29, he said that before he married he had fewer mistresses than fingers on his hand (he offered facile reasons for abstention: his idolized mother never loved him; and he needed to avoid “the complications of sex”). His 40-year marriage, to Charlotte Payne-Townshend, was celibate. How the two came together is the subject of John Morogiello’s witty, talky Engaging Shaw.

As with Shaw’s life, the play probably combines fact with Shaw’s fictionalizing. It begins in 1896. Shaw isn’t the white-bearded icon of his later years. Although already deep into his “character,” G.B.S., he’s brown-haired and broke. He can’t produce a play and is beholden to Sidney and Beatrice Webb, Fabian socialists on the rise, for his livelihood. The play follows a transitional year in his life. In the process, he makes the changes that enable him to flourish.

To hear Shaw tell it, in a letter to Beatrice Webb, his left foot had necrosis of the bone and he was emotionally bankrupt (when a doctor said Shaw was killing himself, he replied, “the prospect was not in the least disagreeable to me”). Charlotte nursed him back to health in the country. He married her, he says, to prevent a “senseless scandal.” His objection to marriage “had ceased with my objection to my own death.” Of course, he adds, Charlotte had to get beyond “such illusions as love interest, happiness interest, and the rest of the vulgarities of marriage.”

According to Engaging Shaw, it was the other way around. At first Charlotte grows accustomed to his face and bluster. Then she falls in love and pursues him. When that doesn’t work, she takes an “unconventional,” Shavian approach: she stops wooing him and hooks a platonic lifemate.

Whether accurate or not, the play becomes The Taming of the Shaw. As Charlotte, Angela Pierce builds a sweeping arc and almost doubles in size by the finale. With each new scene, she becomes more forthright and relentless. It’s as if she bursts from the constraints in Alejo Vietti’s Victorian costumes.

Rod Brogan, whose Irish accent comes and goes, gives Shaw the right amount of cocksure centeredness, though his farcical breakdown plays like pure fiction. Brogan has the script’s best lines. These come straight from Shaw himself and spice the play with so much wit it makes the regular dialogue often feel pedestrian.

Michael Warner and Natalie Gold play the Webbs, who apparently had a marriage of true minds as well. Warner makes Sidney a stiff, comic figure (who could put more genuine belief into his political speeches). Gold’s Beatrice devises schemes within schemes. She also wishes, her eyes suggest, that she could be Shaw’s equivalent to Dante’s Beatrice.

Wilson Chin’s richly detailed set boasts a grand, octagonal table surrounded by an eight-sided room and bookshelves. As details depart, the set literally traces Shaw’s gradual unpeeling. The set also has an unintended effect. Engaging Shaw is entertaining. But it’s a paltry imitation of the master, and makes one yearn for some real Shaw on that stage, and soon.

San Diego is in the midst of a rock-musical festival. The Who’s Tommy’s at the Rep (through this weekend); Hairspray opens at Moonlight on the 17th; Rocky Horror Show’s at the Old Globe in September; and Jesus Christ Superstar comes to La Jolla in November.

Cygnet Theatre’s keeping the festivities in high gear with a sprightly staging of Little Shop of Horrors. Directed by Sean Murray, the production goes back to the musical’s black-and-white, B-movie roots: Roger Corman’s 1960 basement-budget, comedy classic — filmed, he claimed, in two days and a night. On Sean Fanning’s soot-clogged, Skid Row set, everything’s a shade of gray, even the flowers (which look like they just came from their own funeral). In a Kansas-to-Oz flip, the carnivorous plant, Audrey II, is in Technicolor.

Every musical has “get it right or else” songs. Along with the girl-group chorus for Little Shop, which must be up-to-the-minute hip and brimming with attitude (and is at Cygnet), the woman playing Audrey must steal hearts with “Somewhere That’s Green.” Melissa Fernandes does just that, and more. As she sings, it’s as if psychologically bedraggled Audrey imagines a caring, adult relationship for the first time.

Brandon Joel Maier and Phil Johnson hit all the right notes as Seymour and Mr. Mushnik, and Geno Carr shows impressive versatility as a passel of baddies (including the dentist from hell “paid to be inhumane”). David McBean gives Audrey II the requisite booming voice and a drooling urge to convert all of humanity into “plant food.” ■