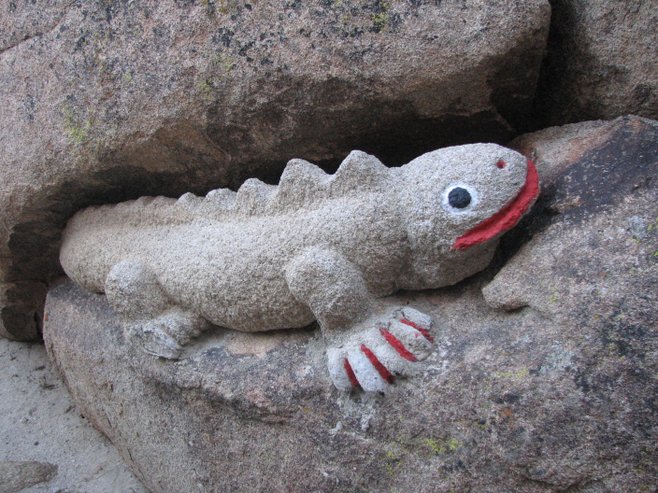 Out on Route 8 east of San Diego stands the 70-foot Desert View Tower above Boulder Park in Jacumba.

For three dollars I was allowed to climb the three-story stone tower that houses a museum and trinket shop to the viewing deck above for a panoramic view of the Anza-Borrego, Salton Sea and Chocolate Mountains, as well as El Centinela (Signal) Mountain just across the border.

Route 8 from San Diego County to Imperial County gains 4,000 feet in elevation. The Salton Sea lies almost 250 feet below sea level. So you can imagine the 190-degree view to the horizon to be had from the tower, particularly on a clear day.

The tower is a registered historic landmark along Route 80, the “old” highway built in 1928 by Bert Vaughan, owner and proprietor of a luxury hotel in Jacumba. The “new” Route 8, completed in 1967, bypassed the town — and as has happened in many rural communities across the country, the rerouting resulted in a loss of population and business. Although the population of Jacumba is now less than 350 people, during its heyday in the '20s it exceeded 5,000 due to the popularity of the hot springs.

The healing sulfur hot springs originally attracted the early San Dieguenos (the Native Americans, not early settlers), who eventually established permanent settlements in the vicinity. Clark Gable and his entourage apparently felt similarly, as they were known to frequent the springs and supporting facilities in the then-booming town.

Coincidently, Vaughan had constructed the tower in honor of the pioneers, whose wagon trains first carved tracks across the western wilderness between Yuma and San Diego, as well as those that laid the railroad in 1919 (and later the highway) that trimmed the month-long journey down to days, facilitating settlement and commerce.

Days before I had been perched on a ridge above the Anza-Borrego in awe at the beautiful view, pondering the impression early explorers and settlers must have had when first coming upon the sea, desert and mountains ranges. I understood and appreciated Vaughan’s sentiment.

The ticket price also included access to Boulder Park where Merle Ratcliff, a Depression-era unemployed engineer, had stayed and carved effigies into the boulders. The park was created just east of the San Andreas Fault amidst miles of massive granite batholithic boulders that have been exposed thanks to time and the elements of nature.

Lizards, turtles, dogs and buffalo were carved from the granite, along with stairs that lead up, then down, from one cave to an overlook ledge, then back on down to another cave. It’s a fun place that brought out the fort-making kid in me.