Lamb’s Players Theatre's The Book of the Dun Cow 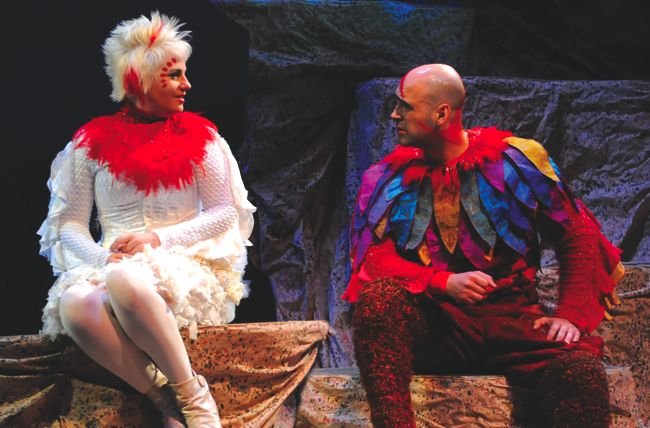 In Chaucer’s The Nun’s Priest’s Tale, Chauntecleer the Rooster dreams an omen. A beast “like a hound” terrorized him with such a fearsome look, the rooster almost died. He wakes up groaning and tells his favorite wife, Pertelote, the story. Miffed, she orders him to “taak som laxatif” — take a laxative since, if he’s stupid enough to believe in dreams, Chauntecleer’s “full of it.”

Turns out, the beast was a fox, and the dream was not only prophetic, it saved the rooster’s life. Regardless of the medium, Chaucer assures his readers, it may have a “sentence,” a message.

Chaucer’s chickens live in a poor widow’s yard. For his novel The Book of the Dun Cow, Walter Wangerin borrowed the characters but moved them way back in time, prelapsarian, pre-people. The Earth is still the center of the universe, and most animals are on friendly terms. Although they don’t fully understand why, they guard the evil Wyrm, imprisoned underground. Wyrm’s so huge he could go completely around the Earth and bite his tail “ahead of him.”

The world is “good.” The Fox, who tells the story, and Chauntecleer get along. But it is also innocent and vulnerable. And there are enemies: Ebenezer Rat steals the yolk from freshly laid eggs. Other evils lurk and expand, even if the innocents have no words for them.

Chaucer’s Chauntecleer, when all’s said, is a cool and wiley dude. He trusts his intuitions in the face of harsh criticism. After he wins the day, he struts, and preens, and “fethers” Pertelote 20 times — nudge, nudge. The Dun Cow Chauntecleer’s more like an amphibian, living in two worlds, neither of which he fully understands. He’s the leader of the animals and smugly lords it over them (his ego, as a young neighbor of mine said recently, “has a big ego”). At the same time, he often questions his abilities and rarely sleeps. Dreams of destructive forces keep him awake. “How,” he asks, “can the meek of the Earth fight against such a bloody enemy?”

Back in the early ’80s, Robert Smyth directed one of my all-time favorite productions, Christopher Marlowe’s Dr. Faustus, in the old National City space. What grabbed me, and still does, was his conception of evil. The actor playing Mephistopheles — wish I could remember his name — wasn’t in the least demonic or bug-eyed. He didn’t tweak a mustache or shake a red pitchfork. In fact, he moved slower than everyone else, somewhat like a monk, and his speeches were pensive. The actor made it clear that evil can take its time — that evil has all day.

What Smyth did with time in Faustus, he does with space in Dun Cow. Evil worms its way everywhere in the beast fable. One sees visible agents, like vile Cockatrice, and hears of basilisks and tragedies. But the production strongly suggests that what goes unseen is ever-present, onstage and in the audience, and ever ready to strike. Only constant diligence can keep it at bay.

Deborah Gilmour Smyth’s soundscape, music, and eerie noises, conveys that sense. You could almost say the music vs. the sounds, since the former, including a leitmotif with a harp, favors the animals, and the noises — grating, electronic, unnatural — the forces of evil.

The Lamb’s production enhances the themes, the soundscape, and the look: each of Jeanne Reith’s wonderful hybrid costumes combines multiple eras with fur and feathers. What it needs, especially in the first act, is more urgency. David Cochran Heath’s Lord Russell Fox is a well-spoken narrator, but most scenes are static. As in Cats, actors showcase choices (Cynthia Gerber’s charming, twitchy-nosed Wee Widow Mouse; Jesse Abeel’s manic/funny John Wesley Weasel slides around on his heels; various bird and chicken neck-jerks, the chickens named for streets in Pacific Beach, Beryl and Chalcedony; Bryan Barbarin’s Mundo Cani Dog howling “marooned” far too many times) and slowly set the stage.

As often happens when novels get made into plays, there’s often a stretch where the result is neither, or an enjambment of both: verbal information clogs the action with backstory and descriptions.

The production finds focus in Act Two. Heath’s Fox conjures up epic battles with words alone. And a fight scene absolves other sins. Were it staged on terra firma, the battle between Chauntecleer and the evil Cockatrice’d be a yawner: they rush at each other, tussle, and fall back. Then rush again, grimaces first, and tussle again. What makes the battle distinct: Lance Arthur Smith and Patrick J. Duffy, à la Crouching Tiger, Hidden Dragon (or Cirque du Chauntecleer), fight ten feet off the ground. Dangling on wires, they go at it with relish.

Chauntecleer is one wracked rooster, and Smith pulls off the fight and his character’s myriad internal struggles convincingly. As Pertelote, Season Marshall Duffy’s perky veneer gives way to understated wisdom. As the title character, Kathleen Calvin never says a word but speaks volumes in a balletic sequence choreographed by Colleen Kollar Smith. The Dun Cow, a brownish beast with horns, can help humanity. But in Wangerin’s world, free will rules, not destiny. The book is being written as we speak, and humans can’t wait passively for divine intervention. The Dun Cow helps those who help themselves. ■

The Book of the Dun Cow, adapted from Walter Wangerin’s novel by Kerry Meads and Robert Smyth

I just finished reading this review and was wondering why reviewers have to try and impress us with their sophistication and vocabulary when they write a review. I would guess less than half of the population know what a leitmotif is, but almost all of us could understand the simple concept of a "recurring theme".

I am sure that even less know that prelapsarian means before the fall of man. If you tell us that the play is set pre-people there is no reason to use the word prelapsarian.

The paragraph with the word enjambment in it is hard to describe. The reviewer seems to indicate that something has been jammed together. I think that in fact you will find that it means two things have come apart as in a poem where two lines make no sense unless they are connected.

"Breathless with adoration; the broad sun Is sinking down in its tranquility".

But in the end I enjoyed the play immensely, or should I say "very much".