Heymatt: Is the military working on a laser gun — a weapon that uses a laser to kill people? Maybe a laser tank or laser cannon? I was just wondering how much science fiction has predicted the future. And if you shot a handheld laser gun, would there be any recoil? I would think that would really knock you on your ass... — Darien, via email 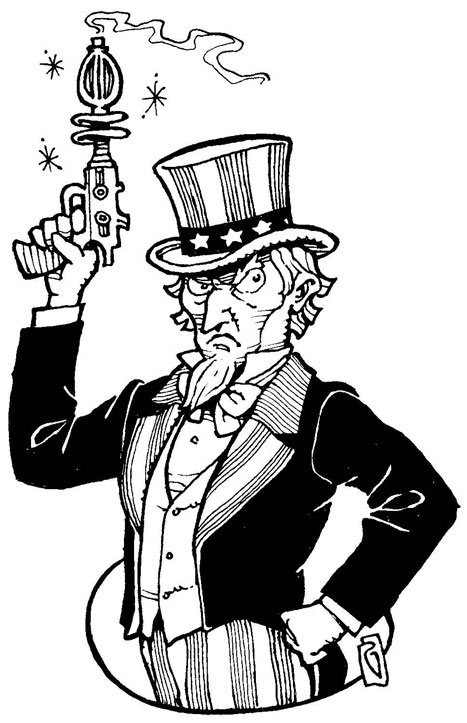 You’ve got to believe the Department of Defense is tinkering around with anything it can think of in the way of weaponry. Wouldn’t surprise me if there was a Department of Spitball Technology buried in some Pentagon basement cubbyhole. But the flashy death rays of science fiction, of course, were more than the DoD could resist. Remember Ronald Reagan’s “Star Wars” defense system? Maybe not. That was a couple of decades ago. Anyway, that goofy proposal for the ultimate missile defense perimeter above the U.S. was full of laser gadgets (and even tiny nuclear explosions!). The few crumbs left from that loaf of lunacy do include laser weapons, though. In one form or another, they’ve been deployed in Afghanistan and Iraq, and research still goes on.

The current crop of laser weapons are professionally known as electrolasers. Here’s the science: the weapon fires a laser light toward the target. This ionizes the air (a plasma channel), which then allows an electrical current to be run through the plasma pipe to strike the target. So, the laser itself doesn’t do the damage, it just preps the scene for ultimate destruction. If this sounds familiar, it should. Using an electrolaser is like creating a lightning bolt that you can direct at the bad guys. It’s said that you actually hear a “crack” sound when the weapon’s fired, the way you’d hear the boom of thunder accompanying lightning.

From there on, all you need to decide is how much electro-fire-power you want to shoot. Big systems that generate a lot of juice can melt a tank or fry an entire electronic installation (or “make a car explode,” according to one manufacturer). Those need to be mounted on heavy machinery or perhaps taken into the sky on a plane. Lower-power weapons, including handheld things that look like overgrown rifles or shotguns, can be used against personnel, with the lowest power being disabling, not fatal (unless you’re “wearing a lot of metal,” so the heavily pierced should beware and be cooperative). Field experiments with electrolasers to counter IEDs need more tweaking, apparently, as do most of the other electrolaser weapons. Naturally, these are also being developed for police departments to replace the Taser, which relies on a barbed hook and wires to transmit the electrojolt.

So, you figure you’d be recoiled back to the 1800s if you fired one of these babies? Naw. They don’t involve projectiles, so the “equal and opposite reaction” law doesn’t apply here. The force used to move the electricity is near zero, so you’ll have no problem.

Hey Matt: This may be a question better suited for Grandma Alice, but I’ve addressed it to you. In making moonshine whiskey, I’ve always been told that it is the chemical interaction of yeast with sugar in water that produces the alcohol. If this is so, then what role does the grain, such as corn or barley, play in the final product? Also, is distilling your own whiskey legal in California? — John Barleycorn, via email

You heard right about yeast and sugar (and water). But old-timey moonshine wasn’t made from ordinary table sugar. It was made from the sugars in the (usually) corn that got mashed with the water and yeast. Grains in general are loaded with sugars, so the yeast has plenty to interact with to eventually create alcohol. It’s actually the distilling process that yields alcohol. Just a nit pick. And, depending on the aging and distilling process, the grain can add some distinctive flavor. Alcohol made from sugars (including honey, molasses, maple syrup, etc.) will yield something like vodka or rum, not whiskey or even moonshine.

As for turning your kitchen into a distillery, sorry, the feds frown on that one. Can’t even do it for personal use. I’m sure you don’t want the ATF busting in your door. But, actually, since there are personal distilleries all over the map (including California), volumes of do-it-yourself distilling instructions on the web and in print, many distillery-supply stores, and plenty of home-distiller blogs, it’s probably the most flouted federal law there is.

While lasers are here to stay on the battlefield, they are rare. Physics being physics, we simply have not yet developed a very efficient system, so power remains the main problem. the THEL (Tactical High Energy Laser) has been fully developed for shooting down incoming projectiles and aircraft. It is mounted on a railroad car, however, so it remains in limbo for a production go-ahead. ABL (Airborne Laser) has also been fully developed and is ready for production. ABL mounts in the nose of a 747 aircraft. It is part of the suite of systems designed for national missile defense, however, so has been placed on hold by the current administration along with the rest of all missile defenses.

Tactical systems heve been developed but not fielded. These include STINGRAY, a man-portable device which scans an area with a Class III (eye safe) laser looking for reflections from eyeballs, much like the reflection of a deer's eyes in headlights. Once a reflection is detected, the operator can narrow the scanning beam to become a Class I (not eye safe)laser, burning the interior of the enemy's eye, blinding him or her. A vehicular version , called CCLAW (Close Combat Laser Assault Weapon) is also available. It operates much like Stingray, although it is higher powered and can burn eyeballs through "direct view" optica and, it is reported, can actually score the lens of an electro-optic visual system.

The Army's AMCOM (Aviation and Missile Command at Redstone Arsenal, AL has also developed a similar laser system capable of scoring the glass on the warheads of passive heat seeking missiles like Sa-7, SA-21, STINGER, etc. This obviously breaks lock-on and causes the missile to mission abort.

Whew! Who knew we had a ray gun expert in Aliceland. As you can see from the answer, most of the weapons are just too large to be carried in the field. Have to be moved around with big machinery that limits its practicality. Thanks AARguy for all the techie details.