Why don’t you slip out of those wet clothes and into a dry martini? — Robert Benchley 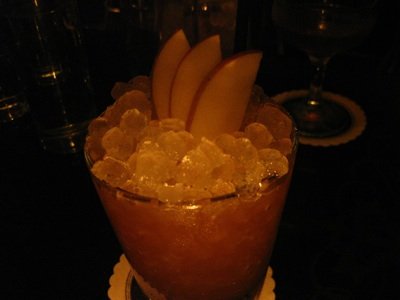 "M and H. This must be it,” I said, stopping before an unlit gray door on which the peel-and-stick, mailbox-style letters were affixed. There was no handle. David tried pushing, but that didn’t work. The street, located at the edge of New York City’s Chinatown, was dark and devoid of people; steam rose from imperceptible gaps in the sidewalk; a puff of muggy air carried the stench of wet dishrags and emptied-out grease traps from nearby restaurants. I wrinkled my nose at David. “Karen wasn’t kidding when she said this place was understated.”

A man emerged from the shadows, reached over my shoulder to point out the small buzzer to the left of the door, and hustled off, our words of thanks falling on his back as he disappeared into the darkness. I pressed the button. A moment later, the door buzzed and we pulled it open to find an attractive young woman poking her head through thick velvet curtains. The woman correctly guessed our names and led us inside.

Despite the darkness outside, it still took a while for my eyes to adjust to the murky interior. The space was roughly the size and shape of a school bus. We cozied into our circular booth, the backs of which rose well over our shoulders, providing plenty of privacy for roaming hands (probably why my friend had told me the bar was a great “closer” for dates).

“What are you in the mood for?” asked the woman.

We’d known in advance that Milk & Honey didn’t do menus — part of its “charm.” It was safe to assume vodka wasn’t an option; bartenders at these Golden Age of Cocktails clubs consider the clear liquor pedestrian at best, inferior at worst. While dining out with my aunts in Brooklyn Heights a few nights earlier, I’d tried and liked a simple classic, the sherry cobbler. I asked for something similar to that; David ordered a “boozy” bourbon drink.

“So? How’s it stack up?” I asked, once we were sipping in the dim light of the one small candle on our table.

As a professional artist and amateur chef, it was only natural for David to be drawn to cocktails — the consummate merger of craft and consumption. In San Diego, he favors libations at the Tractor Room and Starlite. In New Orleans, he was on a mission to locate the best Sazerac; when we found ourselves being served by the legendary bartender Chris McMillian, David exhibited the reverence and awe of an aspiring actor meeting Johnny Depp. The last time we trod the streets of New York, David had discovered the Pegu Club — a paragon of mixology where bartenders singe thin strips of orange peel over a small flame, and cocktails are chilled by perfectly square, slow-melting ice cubes. Now that we were back in the city for a few days, David was intent on comparing the skills of Pegu’s mixologists with those of its many offshoots. 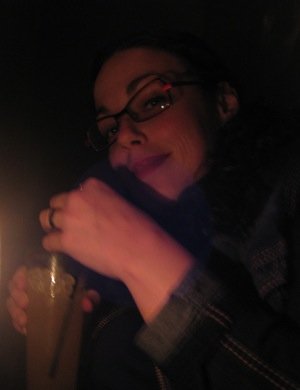 Milk & Honey is one of the trendy new speakeasy-styled bars (such as Prohibition and Noble Experiment in San Diego), where hard liquor is served in a dark place that’s hard to find and even harder to get into.

Harkening back to the days when men wore hats and alcohol was as illicit and exhilarating as a woman in lingerie, most “speakeasies” share a list of rules right out of a Fred Astaire movie. At Milk & Honey, the list was posted in the bathroom: No name-dropping; No hooting, hollering, or even being loud; No fighting, play fighting, or even talking about fighting; “Gentlemen” are to remove their hats; “Gentlemen” are not to introduce themselves to “ladies” (but “ladies” are free to make the first move); and more rules, all along the lines of “don’t be a dick,” phrased in more genteel words.

“I preferred my bourbon drink at Death & Company,” David said, referring to the speakeasy-ish bar in the East Village (“ish” because it wasn’t hard to find or get into, but the romantic ambiance, virtuoso bartender, and no-standing policy fit the bill). Choosing to overlook the elaborate menu, David had asked the bartender to make whatever he wanted, using Black Maple Hill bourbon — an uncommon favorite of David’s that he had spied on the shelf, nestled behind bottles of better-known brands. “That bourbon drink was way better than this one,” David said. “But I do like this booth.” His hand wandered around on my thigh.

“Reminds me of our first date,” I said. “Only less...you know.” I tapped on his hand to remind him how unslutty I had been. Our date had been at Nunu’s, the neighborhood bar bordering Hillcrest and Banker’s Hill. Nunu’s was my stomping ground for a while, back when “strong and cheap” took precedence over “complex and well-crafted.”

“My God, I think I ordered a vodka collins, something really sweet and sour,” I said with a grimace. David chuckled.

“Do you think people are here for the exclusivity as much as for the drinks?” I asked. David shrugged. “I mean, think about it — we had to know someone who’d already been here to get the unlisted number for this place, and then go through an elaborate dance of text messaging. Don’t you think that’s part of the appeal? Everyone wants to be an insider.” 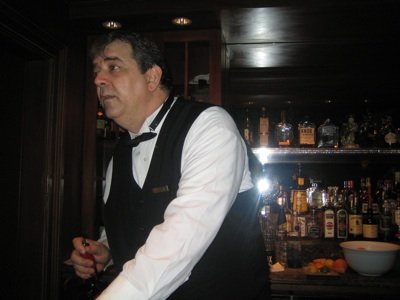 “We didn’t have to know anyone to get into Prohibition,” David said, referring to the pseudo-underground bar in the Gaslamp where we’d joined my sisters to listen to live jazz a few months ago.

“Yeah, but we did have to get our name on the list before seven. I like the planned aspect. It means people go there with intent — they don’t just end up there,” I said.

Our server emerged from the inky ether beyond our booth and set a plate on the table. I had to hold the candle close to make out the bar’s trademark strawberries, whipped cream, and honey. I dragged the fruit through the honey and brought it to my lips. “Mmm,” I said. “I didn’t even know they served food.” I used my finger to taste the cream. “This is a straight-up invitation to be naughty, you know.”

“I’m liking this place more and more,” David said, earning a playful pinch from me.

“You’re going to have to learn how to make that sherry cobbler thing when we get home,” I said. I licked honey from my finger and looked up at David. In the faint flicker, I could just barely make out his dimples as he smiled. “But don’t make it all the time, I don’t want to turn into a lush.” I felt him nodding, understanding, and accepting my demand.

Intoxicated on a carnal trifecta of alcohol, sugar, and fondling, I craned my neck and smiled invitingly. Forgetting talk of clubs and cocktails, David kissed me in our dark corner.