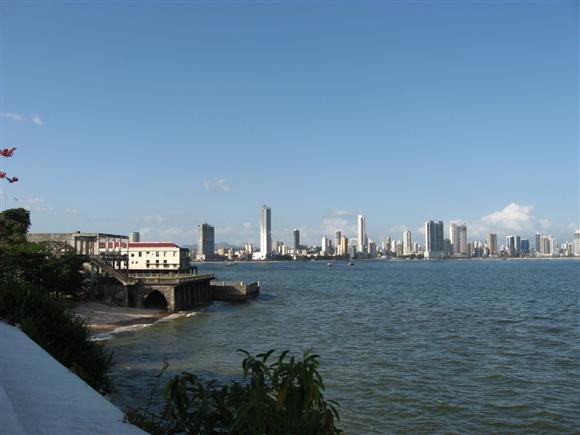 Panama City was exactly as I’d pictured it – all white, dense, oozing history. I took it as a good omen, like forgotten faces from a dream, as we wandered the crumbling edifices of Casco Viejo.

The city was destroyed in 1671 by Welsh pirate Henry Morgan and a band of 1,400 men. Old Panama was looted and burned, though to this day nobody knows whether the flames were set by the pirates or by the residents of Panama in a last-ditch effort to stave off the raiders. The city was reconstructed in 1673 about five miles southwest of Old Panama with a great wall on the ocean side.

The remains of this ancient settlement are still inhabited: the poor in apartments hundred of years old, the wealthy in renovated complexes with Brazilian restaurants downstairs. The President himself lives in the gentrified outskirts of Casco Viejo, with a great balcony looking over the bay towards the skyscrapers of modern-day downtown Panama City.

That night we went out to a casino in Miguel’s neighborhood of El Cangrejo. I won $1.84 on Texas Tea and cashed in. In an insightful reversal of roles, we laughed and became oddly giddy at the realization that we were being carefully watched like small prey by the various gaggles of Colombian hookers, who sulked about the place in bright clothing and fake breasts, ever searching for a glimmer of “yes” in our naive gringo eyes. Miguel took us to a bar down the street and a Colombian girl squeezed my butt on the way in. Another suddenly began rubbing my belly as I waited absent-mindedly for a beer.

We thought it was hilarious, somehow – stupidly enjoying all the attention over a game of pool. I realized that Miguel had taken us here intentionally. He was getting a kick out of the way we perceived the decadence with novelty. We joked about our newfound popularity for a while, but then, as if someone had pressed a button, the realities of the situation sunk in and at once we were somber. Fat gringo wastoids walked away with beautiful young women who would never find love notes scrawled on napkins hidden in their pockets. The thin film of humor had popped. We left.

A causeway extends several kilometers over the water of the south-facing bay of Panama, offering a fantastic view of the towering downtown. The location was U.S. military access only until control of the canal was given over to Panama on December 31, 1999. Several students had been gunned down in protests against the American control of Panamanian territory, leading to negotiations that resulted in the signing of the Torrijos-Carter Treaty treaty on September 7, 1977. Now the causeway houses bars, restaurants and marinas, with the occasional converted bunker the only reminder of the location’s history.

Miguel took us out to a waterfront bar owned by a friend of his. Huge tankers loomed between us and the city, waiting for passage through the Panama Canal. Nella – Miguel’s friend, a beautiful woman, all smiles – served us buckets of Atlas and Panama cerveza. Kaj, fluent and suave in most languages in existence, was already chatting in both English and Spanish with two women at the bar. We stayed late into the night talking, drinking and laughing together like old friends.

The next evening we went back to the casino, where Ricky made twenty bucks at blackjack in five minutes and I broke even. Then out to a hip little bar in Casco Viejo, located in the remains of the old city bank. You could still see the vault locks in the doorway. It was Froste’s birthday, the big 21, so we bought him an excess of tequila and he danced like a man possessed.

Our group unhinged the bubbly, bold and free-flowing aspects in each other – psyche-clockwork-champagne. We had excellent synergy, a classic click, and we laughed and danced like idiots, like old friends. After a while we merged with a group of American and Canadian expat girls who were living in the city – talked, danced.

Then off to clubby Calle Uruguay, where Hooker Affective Disorder hit quick. I chatted with one, “Jessica,” for a while, telling her we were astronauts scheduled for the moon from Cape Canaveral in a week. We were on our last bit of study down here in Panama City, practicing communication skills with foreign entities. It felt like it should have been funny, but it wasn’t. She smiled and faked laughter – always waiting for that deal-sealing “yes.”

Ricky, Froste and I visited the Miraflores lock on the canal and watched huge ships being lowered on the last leg of their 8-10 hour crossing to the Pacific. Over 27,000 workers died in the construction of the canal, most under the original French overseer who intended to build a direct, lock-less channel straight across. The U.S. took over construction and the mammoth project was opened for business in 1914.

Now, over 14,000 ships pass through the Panama Canal annually, saving time and operation costs necessary to round Cape Horn. The amount of land removed in its construction, if strung together in flatbed rail cars, would circle the planet four times.