Hey, Matt: I have a question about cockroaches. You always hear that after we bomb everything else off the earth, all that will be left are cockroaches. Is this true? If it is true, how can that be? Atomic radiation is pretty powerful stuff. — Johnny Largo, via email

And Grandma Alice is pretty powerful stuff, too. She hates roaches so much, she made us take this question out into the back yard to answer it. Wouldn’t even let it in the house. “Might be one of those sneaky damn things in the envelope,” she says. “It’s an email, Grandma.” “Hey, I don’t care. Those things are tricky. Maybe they can come through the wires or something. Rats can do that. Get it out of the house!” When we hear that tone of voice, we know we’d better not ask Grandma for special pie. 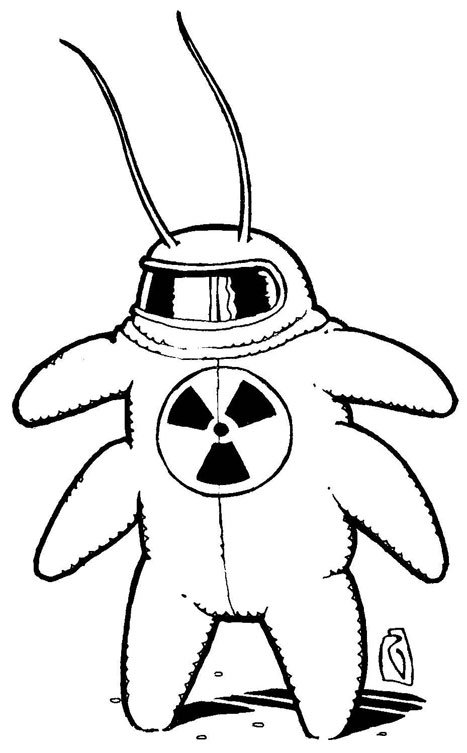 The myth began with the publication of a paper about what was left in Hiroshima after we dropped the (relatively small 15-kiloton) bomb on it. Apparently the list of the living included cockroaches. (No indication of how far the bugs were from ground zero.) As a result, in the 1960s, anti-nuke writers popularized the factoid by saying often and loudly that after we wipe out ourselves, all that will be left are cockroaches. An exaggeration to make an icky point. But scientists with a sense of humor, I guess, have done some testing and here’s what they’ve found.

Roaches can withstand much more radiation than people can. But fruit flies and flour beetles and a particular kind of wasp will be around long after roaches are gone. Radiation damages DNA, which is what eventually kills things that haven’t already been frizzled by the heat released by a nuclear explosion. Humans have much more DNA than roaches, and human cells replicate faster, which is the point at which a cell is vulnerable to radiation. The slow-moving roach DNA is less likely to be damaged. DNA damage eventually does in the human. Humans also live longer than roaches, so there’s more time for bad DNA to have an effect.

After all that bad-mouthing, let’s resuscitate the cockroach image. A cockroach can live up to one month without a head. Once again, they outrank people. A cockroach’s head is fairly useless. It doesn’t breathe through any head structure; it breathes through small holes in its body. Roaches have no blood pressure, so they wouldn’t lose all their blood if their heads were ripped off. And they can live for a month on a good, substantial meal, so they wouldn’t need their mouths. Hey, whadda bug.

So, if roaches won’t inherit the earth, what will? If we finally nuke the globe to shreds, we will nuke ourselves back to the age of protozoa, bacteria, mosses, and algae. They’ve been zapped with more than a million rads and survived. But it doesn’t sound half as alarming to say that after we drop the big one, the only thing left will be moss. And maybe Larry King.

Matthew: I do a lot of cooking, and just the other day I noticed something that seemed very strange. Maybe I’m not right about it, but anyway it seems that way to me. All the oils I have in my kitchen are from plants, like canola oil and sesame oil. All the solid shortening I have is from animals, like butter and lard. Is it true that plants produce liquid oils and animals produce hard shortening? Why would that be true since they’re both fatty substances? — LBK, Encinitas

Yeah, too bad human fat isn’t just big bags of oil. Instead of all that creepy liposuction vacuuming, we’d just have to stick in a tap and drain our thighs into a bucket. The difference has to do with the setup of the fat and oil molecules. Animal-fat molecules are full of neatly arranged hydrogen atoms that allow the molecules to lock together into a nice, solid mass. In plant oils, some of the hydrogen atoms are missing, so less bonding can take place and the fat remains liquid at room temp. Your homemade science observations are quite correct.