The Soup Is Ready 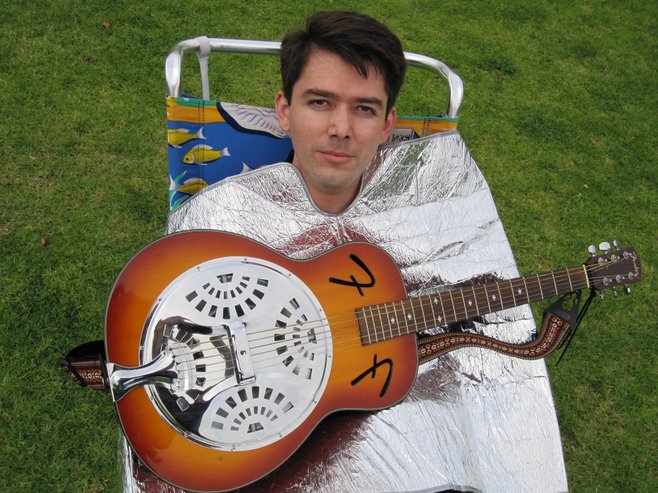 Alan Silva plays mostly acoustic songs in a variety of styles, from indie to folk to country blues. “I take inspiration from many sources in music, as well as from literary figures,” he says. “Compare it to Bob Dylan channeling Ernest Hemingway, or Leonard Cohen writing tunes after reading work by T.S. Eliot, or Neil Young trying to make sense of William S. Burroughs.”

He describes his songs as “familiar objects that are closer to someone because they’re more human, less generic.… Imagine you found someone’s lost backpack at the beach. It might surprise you to uncover a book filled with dusty poems and a cassette recorder from a thousand and one serenades. As you uncover the contents, the overpowering images and acoustic moods reach their equilibrium, like velvety photos becoming pillows, or musical feathers spiraling downward from garden-variety bedroom windows.”

Silva’s own bohemian lifestyle carries over into his work. “I’ve recorded music everywhere,” he says, “in different environments, with an eclectic group of people and in a diverse array of contexts, some less formal than others. I’ve recorded songs in a garage, a bedroom, a living room, a friend’s parents’ home while they were away in Italy…the list goes on.”

WHAT’S IN YOUR CD PLAYER?

“I really enjoyed Emanuel Swedenborg’s Earths in the Universe (1758). I like the observations he makes. Whether it’s read as a fantasy novel or a fantastic, real travelogue, this book will surely open your mind. Swedenborg offers valuable insights, describing his intergalactic sojourns to human beings on other Earths, including spirits, angels, and the dead, all within a cosmic effigy of God-as-man, whose constitution Swedenborg asserts is the Creator’s end purpose.”

“Unfortunately, in 2006, two hoodlums attacked me, punching and kicking me outside the Tower Bar. One said, ‘Go back to Hillcrest,’ whatever that means, and I ended up having to get some stitches on my face. I believe in nonviolence, but every now and then someone threatens to kill me anyway.”

“I’ve never seen an extraterrestrial life form, but I do believe it’s impossible for us to be alone in the universe. It’s way too big.”

IF YOU COULD BE ANY SUPERHERO…

WHERE DO YOU HANG OUT?

“I like to read at coffee shops like the Living Room near SDSU. I’m also a big fan of library book sales, and I will experience music just about anywhere except downtown.”

“I’m writing a couple different books, the first of which is a really monumental collection of poems, with a critical essay, introduction, and historical preface. I’m also conducting research on various topics about ancient religion, philosophy, and approaches to literature for a second book, which, unfortunately, I cannot go into further detail about. I’m also working on a couple tomes of fiction. Encourage me.”

SOMETHING ABOUT YOU FEW WOULD KNOW OR GUESS?

“No one knows how I learned to paint.”

WORST TV COMMERCIAL? “That’s like describing your least favorite intestinal parasite, which could be anything from Taco Bell.”

WHAT MAGAZINE DO YOU READ IN WAITING ROOMS? “I’ll take up Vanity Fair.”

FIRST HEARTBREAK? “The first girl I ever kissed broke up with me on my 18th birthday. Her loss.”

PREFERRED ‘PUTER? “I really don’t care, which is why I own a Dell.”

DO YOU DO VIDEO GAMES? “For the moment, I have better ways to be lonely and not talk to anyone.”