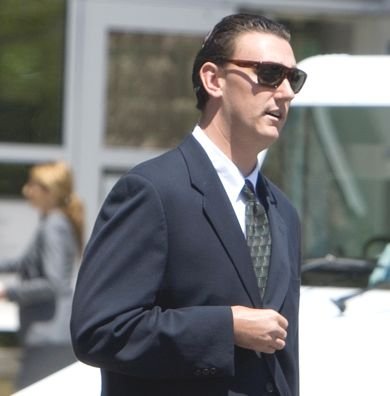 Three young men pleaded guilty to beating an elderly woman at the front gate of her Oceanside condo more than a year ago, and the last two were sentenced in the Vista courthouse yesterday afternoon.

Marion Kyle, a 63-year-old woman with gray hair and thick glasses, testified at a two-day preliminary hearing a year ago. She described being beaten unconscious at her front gate. She said she had gone outside to investigate yelling and the sound of broken glass at the end of a BBQ party she had thrown at her condo, during which she and her guests watched a Charger game.

One of Marion Kyle’s dinner guests said she heard glass breaking from her seat on the balcony, and she called out, “Hey guys, keep Oceanside clean, we all have to live here.” But the response from three male passersby was curses and “Fuck you, white bitches living in your two story condo, ruining Oceanside for us,” according to testimony.

Marion Kyle testified that it was Tyler Mackin who leaned back to deliver a roundhouse punch to her face that sent her to her knees, after they argued at her front gate.

Judge Joel Pressman, then supervising judge of San Diego’s North County Superior Courthouse, expressed outrage at the end of the hearing in December of 2009. He called the conduct of the accused “so outrageous,” “abysmal,” and “an embarrassment to the community” and ordered the defendants to face multiple felony charges. There was one felony vandalism charge for allegedly kicking in two different sets of gates at Kyle’s Oceanside condominium, located at the corner of Tremont and Kelly.

Officer Ready testified that Mackin announced “I’m going to kill you fucking faggot pig,” instead of complying with the officer’s requests. While the officer was trying to subdue the allegedly combative Mackin, his two codefendants reportedly approached the embattled officer and disobeyed his commands and made unhelpful remarks, the officer testified. Codefendants Evinger and Vaughn both pleaded guilty to misdemeanor resisting a peace officer.

Tyler Mackin subsequently tried to kick out the back window of a police cruiser in which he had been placed, according to Oceanside Police Officer Justin Pecchia. Officer Pecchia said he assisted other officers who transferred Mackin into a different, fortified police vehicle. The OPD officer described Mackin as noncompliant, belligerent, verbally aggressive, and reeking of alcohol.

All three defendants were freed on bail or their own recognizance, and they pleaded guilty to different charges at a court hearing on August 12 of 2010. Brandin Evinger pleaded guilty to a lesser battery charge PC 242 and PC 148 misdemeanor resisting arrest, and was sentenced to 3 years probation the same day he pleaded guilty.

Tyler Mackin pleaded guilty to felony assault PC245 (a)(1) and felony resisting arrest by means of threat and violence PC69. These are not considered strikes, according to the plea deal. Mackin is reportedly the son of Shari Mackin, a former Oceanside City Councilwoman. He was sentenced to 365 days “work furlough” under direction of the Sheriff and three years probation today.

Richard Vaughan pleaded guilty to felony assault PC245 (a)(1) and PC 148 misdemeanor resisting arrest. He was sentenced to 365 days “work furlough” under direction of the Sheriff and 3 years probation today.

Sentencing Judge Aaron Katz told Mackin and Vaughan that they “embarrassed yourselves and your families” and “you both should just be ashamed of yourselves.”

Brandin Michael Evinger, 24, and Tyler Thornton Mackin, 24, and Richard Roy Vaughan, 25. I can only assume that the evidence against these three was such that none of these individual street warriors, capable of dropping persons fully half their size and more than twice their age, had the courage of the presumed innocent to take their cases to trial.

One wonders what their lives might have been like if they had shown that much sense a little more than a year ago...

I can only assume that the evidence against these three was such that none of these individual street warriors, capable of dropping persons fully half their size and more than twice their age, had the courage of the presumed innocent to take their cases to trial.

You can tell by the pic that this bad boy street warrior is a skinny pencil neck twig who would get dropped with one punch in a real fight........

Actually, I thought it was a picture of his 40-year-old uncle.

Wow, these guys are real men, three of them beating up an elderly woman, one should be ashamed. I got to wonder about the plea bargain and the fact that one of the defendent's mother used to be in a position of authority in the local government. It seems to me the sentence was light, well you know what they say karma is a mofo.

No need to wonder-it is obvious on it's face, these losers were connected into a sweetheart deal no poor person ,or anyone not connected in, would get.

This is a requiring at a minimum county jail time, if this clown had any priors I would have sentenced him to state prison-if I were the judge.

Then again I have a set and don't play political games, which would count me out as a San Diego Superior Court judge.

Somebody clued in informs me that it's kind of like a setup: the sentencing on plea opens all three of them up to the kind of up-the-asset scrutiny that would send the rest of us to the ACLU... maybe... like I have any experience with any of that.

What has happened to our justice system? These three beat an old lady because she asked them to stop doing something THEY should not have been doing in the first place. Work furlong? What a furling joke! Felonies are punishable by a slap on the hand? Come on America, let's start holding accountable for their actions!

Come on America, let's start holding accountable for their actions!

The only person who should be ashamed is the judge for agreeing to this politically connected plea deal, for a loser.

Marion Kyle testified that it was Tyler Mackin who leaned back to deliver a roundhouse punch to her face that sent her to her knees, after they argued at her front gate.

They should have been charged with felony elder abuse in addition to the battery charges. . . . Tyler Mackin pleaded guilty to felony assault PC245 (a)(1) and felony resisting arrest by means of threat and violence PC69. These are not considered strikes.....He was sentenced to 365 days “work furlough” under direction of the Sheriff and three years probation today ======================= If FELONY BATTERY on a senior citizen is not going to be charged as a strike, when petty theft with a prior is, then the system is broken, and being gamed, and my next segment will tell you why. He should have received, AT A MINIMUM, a year in county AND A FIRST STRIKE. . . . Mackin is reportedly the son of Shari Mackin, a former Oceanside City Councilwoman. ====================== This is his "get out of jail free card" and the basic double standard in our judicial system.

The rich, or politically connected, don't face the same justice the poor (and weak) do.

I am a card carrying ALCU member (NRA too!), and this is one reason why.

Being "Connected" to any Leaders, is automatically "kid gloves" handling!

Attack a Senior, do 6 Months of Jail Time...

That would "solve" many of these situations and also send a message that picking on old folks is NOT COOL or acceptable!

Imagine if ex-Councilmember Mackin was the person beat up by minority PUNKS, the entire affair would be much different; the PUNKS probably would be dead and she would be receiving " Get Well" cards from all her friends...

This is exactly what is "WRONG" with our City, our County, our State and our Gov't.

I'm ashamed of this and I hope you are too!

Call your elected Leaders and tell them that this outrage is not acceptable!

I find it most interesting that living close to O'side, I never heard or read about this before. More of that Pulitzer Prize winning reportage of the Light News. These three punks get to make various plea bargains after the judge is described as outraged. Which judge accepted these sweet deals? They plead guilty to felonies, yet they don't count as strikes and they get a year or less of work furlough. If all such felonies were treated this way, there would be no prison overcrowding in the state, and the prison guards would be few and powerless.

Does all this mean that Mackin, Evinger and Vaughan are setting themselves up to commit more felonies without having to worry about three strikes? I had some experience in teaching in the Oceanside schools, and don't find this sort of thing all that surprising on the part of late teens and young adults. The city just seems to breed thuggery, nastiness and disrespect for elders and any sort of authority figures. Mackin is very lucky that he didn't end up in a carotid choke hold that rendered him, if not dead, brain damaged for life.

Then there is the fact that it took these cases well more than a year to work through the "justice" system to this misbegotten conclusion. Justice being delayed in this case was justice denied. I was wondering why, in the most recent election cycle, we heard nothing from Shari Mackin. Has the woman some shame? Maybe, although the viper politicians in O'side seldom show any humanity, let alone nobler motives.

This is all just another example of what characterizes the city of Oceanside. The only real surprise is that all of these dudes are Anglo; the usual street and violent crime in the city involves Hispanics.

We are now in a period of "Fiscal Bullying" which has not been so dramatic in the past as it is now. As more folks here face really tough times they and their "children" will look for others to blame for their situation, taking out their anger on "them".

The next phase will be for them to direct their anger at the Wealthy and the Establishment. Perhaps that is just a few months away as the Christmas spirit will soon be gone and folks realize that they did not get much which will increase their level of frustration/anger.

please see my comment posted in response to the December 3rd article about the murder of Diana Gonzalez.

Here is that link, for all to see!

Thank You for being true to your Oath of Office!

I'm looking forward to everything you have to say!