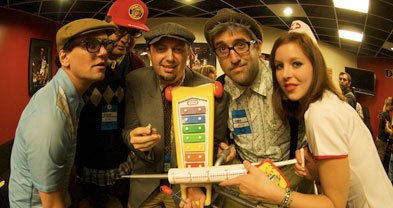 One CMB project, the Depeche Mode–inspired Blasphemous Guitars, has waged online war against a more straight-faced tribute. “Blasphemous Rumours is an L.A. Depeche Mode copycat band that proves yet again that most tribute bands have zero creativity,” says Gimbel. “Now, Blasphemous Guitars gets confused with their name all the time. Still, the feuding was worth it, just to hear their singer tell me that no one would confuse us with them because they were ‘much more grand.’”

After recording Blasphemous Guitars Live 2005, Gimbel says he met former Depeche Mode keyboardist Alan Wilder. “In getting asked to chauffeur him to and from M-Theory for an in-store signing, I thought about giving him a copy of this recording from when we first started and only did DM songs. Glad I didn’t. Though, it would’ve been funny to have it playing when he got in.”

Gimbel appears with Geezer Wednesday, December 15, at the Tin Can Ale House on Fifth Avenue. “It’s our Grandchildren Appreciation Party,” says Gimbel, “so we’re letting the youngsters choose which songs we do from our Facebook songbook. Unfortunately, we can only remember about 30 [Weezer] songs, so we threw in a few others.”

Among the tunes they’re willing to tackle for your amusement; “Get This Party Started” (Pink), “War Pigs” (Black Sabbath), “Lights” (Journey), “When I’m 64” (the Beatles), “Beauty School Dropout” from the Grease soundtrack, and the Mossy Nissan advertising jingle.