Havana, Cuba (If You Can Get There) 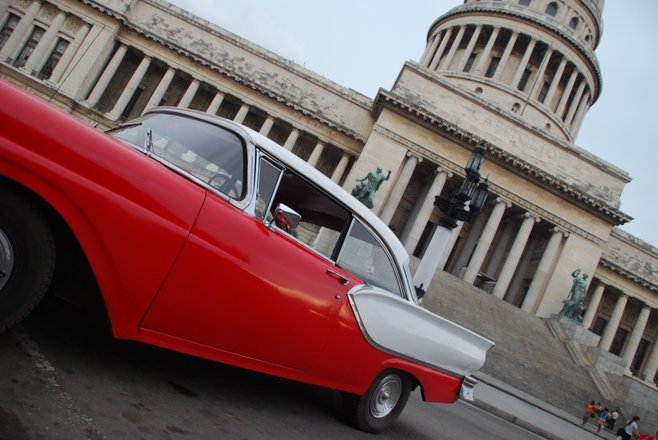 “Where all cars are taxis, and all women are whores.” This raucous response to the frequently posed pre-trip question, “So what does Cuba mean to you?” understandably stood out the most. The “cigars” reply was the majority winner. But what do you expect from people whose ex-President, John F. Kennedy, had 1,200 Cuban cigars delivered to him before signing the U.S. embargo papers against Cuba back in 1963? To describe the Cuban capital city — home to a mere 2.4 million inhabitants — in a few words is complicated. It’s one city, but its various worlds will fascinate, seduce, sadden and perplex the visitor all at the same time. It’s too much, to be honest. So let’s start with what the visitor will undoubtedly meet first: the world of tourism.

Cuba thrives on foreigners bringing in money to have the “Cuban experience”: sipping on a world-renowned mojito, smoking on a Cuban cigar, meeting a Cuban girlfriend/boyfriend (this term is used loosely — pun intended), and essentially being in a dream world where everything is at one’s fingertips. This paradise is a verifiable reality, and lives alongside other realities (i.e., worlds) quite effortlessly.

Things to Do. Walk around Havana Vieja (Old Town of Havana) for a day or two – hunt for the best mojito at places like La Bodeguita del Medio, Hemingway’s old hangout, or walk through some stunning architecture amongst decayed structures. Spend a night absorbing the dance show and glamour at the Tropicana Cabaret. Take a tour through the Partagas Cigar Factory and see the mechanics of making this Cuban treasure. Meander around the Museo de la Revolucion to see pictures of Fidel’s revolution that overthrew Batista’s dictatorship in 1959.

Where to Eat. Paladares – private homes that have sectioned off one room as a restaurant – are numerous in Havana. One of the most well known, visited by queens and movie stars, is La Guardia, located on Concordia Street 418, Centro Habana.

Where to Stay. Among a few other quality hotels, Hotel Santa Isabel (hotelsantaisabel.com) offers all a visitor could want and more. Cost: around $130 per night, depending on room and time of year.

Travel Restrictions. Americans are prohibited to spend money in (and effectively prohibited from traveling to) Cuba. Travel is permitted when one is visiting Cuban relatives or is traveling with a general or specific license (these can be obtained for a variety of reasons, including humanitarian travel and freelance journalism).