Back when it was Jack Murphy. And the Padres till stank. 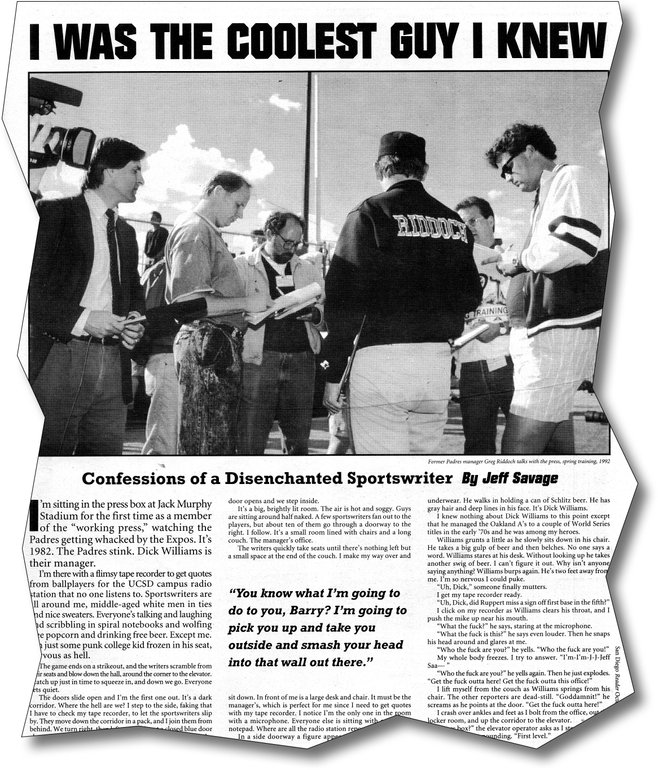 Thirty Years Ago
Some years ago a modest Spanish restaurant surfaced in La Jolla. It served a creditable paella and zarzuela, but the dessert crêpes were not recognizable to either my eye or palate. When I pressed the owner for the ingredients, he admitted that they were flour tortillas doused with caramel sauce and a dash of liqueur. To my cry of astonishment, the owner winked coyly and replied, “What do they know about Spanish cooking in San Diego?”
— “TALE OF THE TAPAS,” Eleanor Widmer, October 25, 1979

Twenty-Five Years Ago
Moments after President Reagan left San Diego Monday afternoon following a campaign rally on the steps of the County Administration Building, San Diego police spokesman Bill Robinson began to brace himself for calls from the media seeking official police crowd estimates. Robinson contacted the office of the duty lieutenant, which has control of patrol functions in the city. “They told me they had no idea, and to check back later.”
— CITY LIGHTS: “REAGANITES COUNT OFF,” Thomas K. Arnold, October 25, 1984

Twenty Years Ago
Lou Wolfsheimer, a lawyer and chairman of the board of port commissioners: “We think it’s a ripoff to the consumers to have all these competitive fares,” he declares, incongruously. “How’d you like to fly into town with your sister and her family, you both jump into different cabs, identical ’89 Fords, and you both get out at the Town and Country Hotel. She gets charged $12, and you get charged $15. Wouldn’t you feel ripped off?”

“Actually,” responds his interviewer, “I’d feel glad for my sister and stupid for not shopping along the line for a cheaper cab.”
— “I AM A FURIOUS YELLOW,” Neal Matthews, October 26, 1989

Fifteen Years Ago
I’m sitting in the press box at Jack Murphy Stadium for the first time as a member of the “working press,” watching the Padres get whacked by the Expos. It’s 1982. The Padres stink. Dick Williams is their manager.

I’m there with a flimsy tape recorder to get quotes from ballplayers for the UCSD campus radio station that no one listens to. Sportswriters are all around me, middle-aged white men in ties and nice sweaters. Except me. I’m just some punk college kid frozen in his seat, nervous as hell.
— “I WAS THE COOLEST GUY I KNEW,” Jeff Savage, October 20, 1994

Ten Years Ago
City councilman Juan Vargas is pulling out the stops in his effort to get elected to the state assembly seat now held by soon-to-be-termed-out Denise Ducheny. To raise funds for the effort, Vargas is putting the squeeze on the city-hall moneybags with whom he’s worked through the years.... Padres co-owner Larry Lucchino ($1000); and car dealers Norm Erb ($500), Greg Adams ($500), and John Hine ($500). In July, Vargas voted in favor of an enormous sign to be built by the Mission Valley car dealers. Although planners said the 1500-square-foot structure would violate state and city billboard laws, Vargas announced, “This is a sign we can be proud of.”
— “SIGN OF CASH,” Matt Potter, October 21, 1999

Five Years Ago
Karl Keller was for 20 years a professor in San Diego State’s English Department and author of an acclaimed study of the poet Emily Dickinson — The Only Kangaroo Among the Beauty. Speaking was one of Keller’s fellow professors.

“He was seriously into S&M, so that would be one reason that he liked Emily Dickinson, because there’s an S&M quality to Dickinson.

“Karl gave a paper at a conference in Amherst for the Emily Dickinson Association. In the middle of delivering his paper, he said, ‘What I would like to do is go up to her bedroom and put on her white dress and walk down the stairs, wearing that dress.’”
— “WILD NIGHTS,” Judith Moore, October 21, 2004