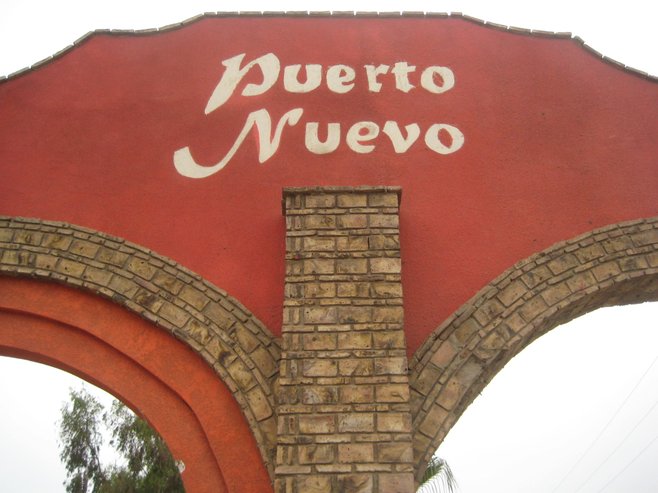 Ten legs jut out from a slender form. It’s dark red in parts and golden in other sections. Your salivary glands are jolted. Yes, Puerto Nuevo lobster times are waiting. Although the plates are not as inexpensive as they once were, by US standards they’re still a bargain at around $15 for three modestly sized crustaceans (or another variation of prices for larger specimens).

The visitor walks the town’s streets and is undoubtedly hounded by “lobster agents.” But try not to bite into the first offer — saunter around town for a bit to get a gauge on the area. There are 20+ restaurants, mostly offering the same menu and prices, all packed into three blocks. Choosing your restaurant based on atmosphere is usually the best way to go.

The locale has been decided, the first round of beers appears within seconds and the lobster is on its way. It’s uncanny how in just minutes from San Diego, your surroundings and culture have categorically changed. The “todo bien” attitude subtly slides into reality, guided along by Pacificos or Dos Equis.

Things to Do. If you’re looking to shop, walk along the seaside bluffs to check out the shops and get ready to bargain — they expect to negotiate. Hire a mariachi group (who will assuredly visit your lunch table) and ask for your favorite Mexican song.

Eats. Villa Ortega Restaurant is recommended for good food and prices with an impressive Pacific Ocean view from its patios. In the southwest corner of the village, it’s a giant restaurant hard to miss.

Rosarito’s World Famous Puerto Nuevo, Celebrates 17th Annual Lobster Fest Oct. 11 You very well may have enjoyed Puerto Nuevo-style lobster at many restaurants in California and Mexico --- on Oct. 11 you can eat it at a festival where it was invented.That Sunday from noon to six on Renteria Street (the main thoroughfare) the 17th annual lobster festival will be held in the Puerto Nuevo Lobster Village. Cost for a plate of lobster and three drinks will be $15.It is the latest edition of the annual festive celebration of the delicious spiny crustacean that helped make Rosarito a popular tourist destination.The festival is organized by the Puerto Nuevo Restaurant Union and Rosarito’s Convention & Visitors Bureau. Restaurants participating include La Escondida, Puerto Nuevo II, Casa de Langosta, Villa Ortegas, Susanna’s and the Grand Baja Resort.“Supporting these type of events is fundamental for Rosarito; we want to show to our visitors the real side of Rosarito, its food, colors, culture and warmth of our people,” said Daniel Cortes, President of the Rosarito Chamber of Restaurants.The family friendly festival will include Baja wine tasting, Baja beer breweries and traditional Mexican Candies, as well as Mexican dance numbers, live music, raffles, prizes and much more.“Millions of people have visited Puerto Nuevo over the past five decades,” said Rosarito Beach Mayor Hugo Torres. “It has become world famous and one of the attractions for which Rosarito is best known. The festival is a great way to enjoy it.” Puerto Nuevo, about 10 miles south of downtown Rosarito on the Free Road, began as a simple fishing village. For local fishermen, in the days before refrigeration was common, a meal of fresh fried local lobster, rice, beans and tortillas was common.Fishermen’s wives also served this delicious meal to many Americans who came down for the day to fish --- and fame and demand for luscious lobster prepared Puerto Nuevo-style grew.In the early 1950s a small stand opened near a Newport cigarette billboard there (which gave the village its name and which translates into Puerto Nuevo in Spanish) and many restaurants opened soon thereafter.The cigarette billboard is long gone but more than 30 restaurants and many shops now dot what has become one of the most famous lobster destinations in the world.More information about Puerto Nuevo and the 17th annual lobster festival is available by dialing toll free 1.800.962.BAJA or visiting www.rosarito.org