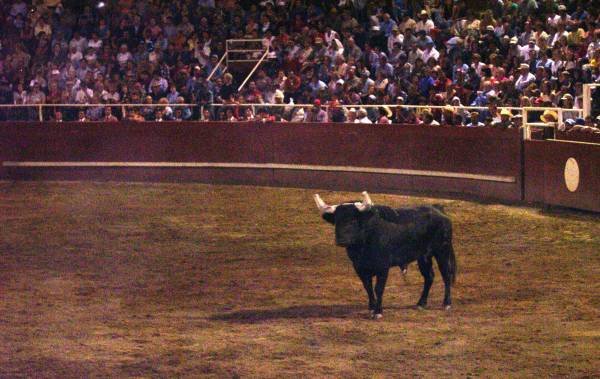 Gustine, in California’s San Joaquin Valley, can transport you to Old World Portugal. Matadors, cavaleiros and forcados donned in colorful old-fashioned garb along with the fiesta atmosphere preserve the culture of this distant land.

Keeping alive the Portuguese and Azorean tradition of bullfighting, bloodless bullfights provide all the artistry and pageantry of the real thing, without death or injury to the animals. A swatch of Velcro on the bull’s back and Velcro-tipped “swords” make this possible.

When bullfights were outlawed in California, the Portuguese community received an exemption for their bloodless variation as long as they’re linked to a religious festival.

On most weekends, you’ll find one in a dusty little town in the Central Valley. Lively music, dancing and lots of linguiça and other great food are in abundance.

Events in Gustine start about 7:30 p.m. at Bella Vista Plaza Arena, Preston Road at Santa Fe Road. Tickets are $20, free for those under twelve. If you go, be sure to bring lots of mosquito repellant.

Interesting. I just wrote a story on Madrid, Spain where bullfighting is a traditional part of the culture. I declined to attend any bullfights when I was there. The one bullfight I attended years ago in Rosarito, Mexico made such an indelibly bad impression on me that I decided it would be my last one. I didn't realize at the time that the bull would be killed. It's good to know that they're able to preserve their culture without sacrificing the bull. Thanks for sharing.

Bullfighting: It's not ART; it's not CULTURE; it's "TORTURE." Bullfighting: The "mutilation and torture" of bulls (and horses). Bullfighting is the most "indefensible" type of "animal abuse."

Bullfighting is not a "fight" at all, but a systematic "torture-killing" that pits a gang of armed thugs wielding "razor-sharp barbed spikes, spears, swords and daggers" (these weapons are designed to "inflict intense pain and cause blood loss" to weaken the animal) against a lone, terrified; confused; "fatally" disabled and wounded animal.

So-called "bloodless bullfights" are practiced in the U.S., where the bulls are "teased, harassed, terrified; confused; tormented (and injured: http://www.cas-international.org/en/news/newsitem/bladeren/11/persbericht/expose-of-the-illegality-of-the-so-called-bloodless-bullfights-in-the-usa/?) only to be killed once outside the arena, in a Mexican bullfight; a slaughterhouse or elsewhere.

In these events bullfighters perform who also "torture and kill" many bulls during "regular" bullfights: "Close-up Horror of Bullfighting" (Graphic) http://www.youtube.com/watch?v=xvwQ4Dmlur8

Although the bullfights in America are "bloodless," bulls and horses are still subjected to large amounts of "abuse and stress" and the risk of getting "wounded."

The bullfighting industry is losing ground in the bullfighting countries and that is why they are trying to export their "bloody business" to other countries. Since it is "prohibited" to "torture and kill" bulls in the United States, they have "invented" bloodless bullfights, to promote their "sadistic" industry in an "innocent" form.

However, the same industry does not have a problem with "killing defenseless animals." The money they generate from the bullfights in America is used to promote their "blood" sport. Furthermore, people who visit the bullfights may "mistakenly" think that bullfighting is not that cruel, while it is one of the most "cruel forms of animal abuse."

We must not allow the bullfighting industry to continue promoting their "bloody business" in America. America has many great events to offer, without "animal abuse."

Bloodless bullfighting in our country of America should be, and remain "BANNED" because it is, and always will be a "Tradition of Cruelty."

The bullfights that have already been organized in Las Vegas, Nevada were a "big failure": only a few people attended the events and the bullfighting industry "lost money."

This is reason enough to "Ban" all bullfights in the USA: people want this "abuse" to "stop."

Please help these "suffering" animals – "STAY AWAY FROM BULLFIGHTS; speak out against them and DEMAND that they be ABOLISHED.”

Art? The art of torturing animals? I don't know how this is even allowed some countries, only very sick people could support this."Bloodless" bullfight, is also torture, the bull and the horse suffer a level of stress and terror that are just not acceptable in a civilized country. Born and raised as catholic in Europe, I can assure that there is no ritual or tradition ever authorized by the Roman Catholic Church that allows the torture of an animal, if these portuguese people say they have one, then they are not catholic at all. California must ban this practice, we don't want this here.