When you give somebody mouth-to-mouth resuscitation, you’re blowing air out of your mouth into their lungs. I always thought that when we blew out air, there was no more oxygen in it because our body has used it all up. How does blowing into a person’s lungs help them breathe again? I hope you can figure this out for me. 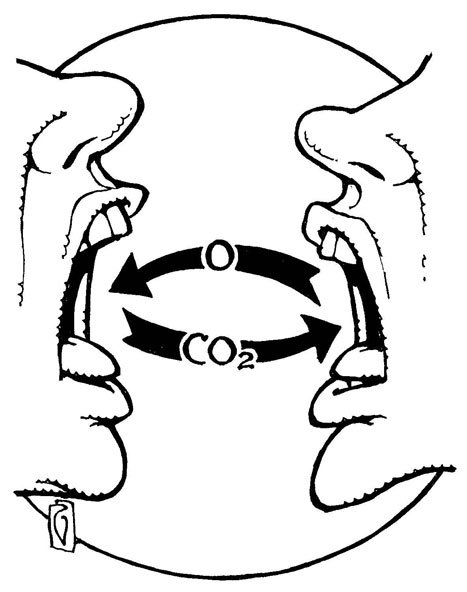 First of all, oxygen is overrated. Likely most people think we jet around all day inhaling pure O2, exhaling clouds of carbon dioxide. Wrong, wrong, wrong.

The air you suck in, aside from smog and bugs and crud, contains mostly nitrogen — 78 percent, more or less. Next comes oxygen — around 20 percent. Then CO2 — 0.04 percent. Big surprise, yes? Even if you huffed in more oxygen, it wouldn’t do much good, since your bod couldn’t use it. Red blood cells extract only 4 or 5 percent of inhaled O2, so any more is kind of a waste. Exhaled air looks a lot like inhaled air, except for the carbon dioxide, waste matter the blood collects as it zips around your bod. What you’re breathing into our victim is about 16 percent oxygen, 4 percent carbon dioxide, and the same 78 percent nitrogen. So there’s only a smidge of a difference in oxygen content between inhaled and exhaled air, and that 16 percent is pretty helpful to somebody who’s collapsed on the bricks.

As an aside that you didn’t ask about, more important than your exhaled air is restoring a victim’s regular heartbeat. If the O2 doesn’t circulate, it’s completely useless. Only electricity can shock the victim’s heart rhythm back, so CPR is a temporary, emergency procedure that buys the victim some time until the paramedics arrive. Don’t worry about the oxygen.

You seem to be a lightning rod for weird questions. Well, I have one that makes me wonder every year if the equinox or some specific time of year affects movements within a household. The best way to explain what I mean is that several doors in my home will always come back open after being pushed shut just shy of latching. This only happens after December and will cease after February. Air currents from heating units are not a factor for they are seldom on. In the summer, the doors will stay in the position they are pushed to, but in winter they will always swing back to the wall doorstop. This may not be worth your time, but it sure is a curiosity of mine.

Weird lightning rod we certainly are. And your question hit the spot. We like the idea that your house is being controlled by the stars, and if you ever decide to sell, let us know. But back on Earth, there’s probably some other explanation for the odd goings-on. We put this one to a trio of carpenters, since we seem to be dealing with wood and hinges. And all we can come up with, of course, is a guess. So what’s the difference between the December-through-February time period and, say, summer? How about humidity. What does humidity do to wood? Makes it expand. So the carpenters say your expanding door or door frame knocks things off balance, and your door won’t stay where you put it. Anybody else want to throw in a guess to add to (1) star power and (2) humidity? Feel free.

When a bullfighter has a particularly good fight and the crowd awards him both ears and the tail of the bull, what does he do with them?

Well, exactly. What would someone do with a house full of old bull parts? But first a quick correction. The crowd doesn’t make the award, the judge does. Every bullfight has a presiding judge who acts as ringmaster and police officer and generally oversees the conduct and fitness of the bull, the fighter, and the crowd. At the end of a fight, if the judge feels the matador dispatched the bull skillfully, he can award one ear, two ears, or both ears and the tail. The bullfighter immediately dumps them at a taxidermist’s shop, who puts them on a classy wooden plaque.

Was Communion wine affected by Prohibition?

You betcha. Made it veeeeeery popular, since it was one of a few types of alcohol still legal to manufacture during that time. Between 1923 and 1924, for example, sales of “sacramental” wine increased by 50 percent, though no one particularly noticed a corresponding boost in church attendance.