So what’s with the funky lighting along the new 5/805 merge? They have cute red-and-white beanies, antennas, and really cool monkey trapezes. I’ve only seen this style of lights in one other place in my travels around the U.S., and I’m wondering what’s so special about them.

I’ve been seeing these cameras all over town, and they look quite a bit more sophisticated than red-light cameras.… [There is] one in particular at Mission Bay Drive and Garnet.

I would like if you can tell me the purpose of little white boxes that are along I-5 in North County. They are on poles with solar panels. They don’t have a lens and don’t look like cameras; instead they are little white boxes with perforations. Are they checking for explosives or poisonous gases? 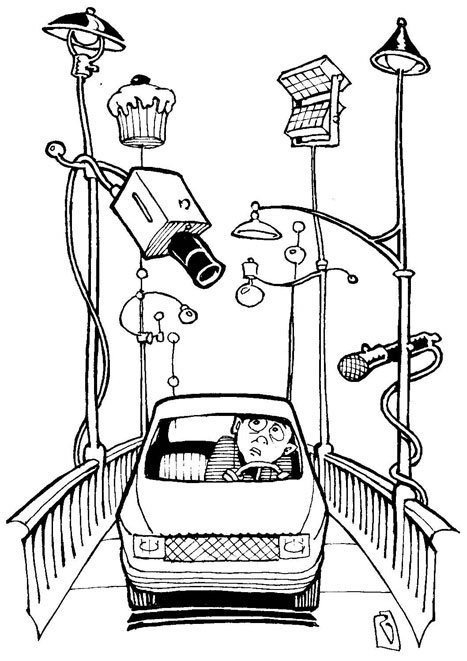 You all seem to be quite baffled by things on poles lately. Beanies, monkey trapezes, poisonous gases — what an assortment. But I guess when things on poles start generating mass paranoia, it’s time for the elves to come to the rescue. They divided into three teams after considerable yelling and belly bumping (everybody wanted the trapeze question, nobody wanted the explosives question), and here’s what they came up with.

First of all, the elves found that things on poles are never as much fun as we might hope. Of course, you don’t have to believe any of the elf report and instead go back to your favorite made-up story. You always have that option here at the Matthew Alice Office of Genome Mapping and Peanut Butter Technology. So, Charlie, what’s up with your poles with beanies? They’re officially called high-mast lights and have been around since the 1960s. Our particular high masts are set at the intersection of three freeways (5, 805, 56) and several city streets, which, according to Caltrans, comprises 21 lanes of traffic. If they’d tried to put up standard freeway light poles for that many curvy lanes, the place would look like a big metal forest. No way it would work. The solution? Fewer but higher poles with four large lights in a circular configuration on each pole to illuminate a greater area.

Grandma always grumbles when it’s time to change the bulbs in the ballroom chandelier. Next time she does, we’ll take her out to see the high masts and give her a taste of a real bulb-change challenge. Each four-bulb fixture is 60 feet up on its pole (any higher and they would have illuminated nearby condos). When it’s maintenance time, the whole circular light fitting, with the antennas and trapezes and beanie, are lowered by a cable. When they go back in place, workers use the striped beanie, hanging trapezes, and vertical “antennas” (not really antennas) to gauge whether the light fitting is properly placed horizontally and vertically. For anyone who’s not seen the high masts, maybe this would make a jolly and informative Sunday outing for the kiddies.

Mike’s “sophisticated” red-light cameras are more a matter of logic than imagination. But at least they’re simpler than the high masts. Consider a single pole with two arms, each of which runs briefly horizontally then turns up, giving the whole structure the look of a semaphore signaler without his flags. At the top of the left arm is a red-light camera. On the right is a large, circular glass fixture. Simple enough.

Act I: Mike is hustling to a late-evening dinner date...behind time, as usual. The traffic light at Mission Bay and Garnet turns yellow and Mike guns it. Too late, once again. Flash! Click! Act II: The wheels of justice are in motion. Mike’s due for an expensive surprise in the mail. The flash, of course, is from the large, circular glass thingy (a flashlight) illuminating the intersection and Mike’s car, synchronized with the camera’s shutter. The camera alone wouldn’t be of much use once the sun’s set.

Paranoid’s solar-panel boxes contain only the gizmos necessary to help translate sunlight to electrical energy. Openings in the box keep the innards cool. Please sit down, relax, and put away all thoughts of a potential gas attack on North County.

And just to head off emails from electricians, each of you please take out a Sharpie, go back through my answer, delete the word “bulb(s),” and substitute the word “lamp(s).” In the trade, bulbs are known as lamps. I use “bulbs” to avoid confusion with things like the leg lamp from A Christmas Story.

Thanks for the tip, SD.

Paranoid drivers already suspect it, but all other drivers need to know about Snitch Tickets, which are fake/phishing camera tickets sent out by the police to bluff the registered owner into ID'ing the actual driver of the car. Snitch Tickets haven't been filed with the court so they don't say "Notice to Appear," don't have the court's address, and say (on the back, in small letters), "Do not contact the court." Since they have NOT been filed with the court, they have no legal weight. You can ignore a Snitch Ticket. If in doubt, Google the term.

They are in use in Del Mar, El Cajon, Encinitas, Escondido, Oceanside, Poway, Solana Beach, and Vista.

The elves apparently didn't drive far enough up the 5 Freeway to see the strange white boxes mounted above the Southbound lanes of the 5 that resemble cameras, but with no lenses. These are near the San Onofre power plant. I think they're some sort of scanners that read information from passing trucks, but would like to find out what the elves have to say about them!

Here's some interesting technology that is used inside the police car. The CHP, Sheriff and SDPD have units with these systems: http://www.youtube.com/watch?v=WA5Gy3...

They are using them in Arizona on bridges over highways. It reads your license plate and then reads it again miles later on another bridge. The system calculates your speed from one point to another and if it's over a specific limit for that distance, you get a ticket for speeding.

I think there need be some clarification. The boxes are most likely not Controller boxes (mechanisms that control the flow of electricity from solar panels to batteries to lights/etc.). They are most likely traffic monitoring devices (see this website http://www.rfid1984.com/tollway.html for further information). I was wondering what those were and was concerned, but it doesn't seem Big Brother is all that intrusive in this case. Thanks for the forum. The more information we know, the better decisions we can make.