Dear Matt: My parents and aunt and uncle just got back from the Caribbean on vacation. We all got together to look at their pictures, and in the middle of everything, my uncle pipes up about how there’s no tide in the Caribbean. The water just stays the same all the time. I should tell you that my uncle is full of facts that might not really be facts, so I wanted to check on this one. How is it possible that a bunch of islands in the middle of the Atlantic Ocean could have no tides? It just didn’t make sense to me. Of course, I never told my uncle that. Or maybe I’m just mad that I couldn’t go with them. — Sir Anthony Anonymous, via email

Anybody who’s sat through an evening of other people’s vacation pix, highlighted by a know-it-all uncle, deserves our full attention immediately. Thank you for writing to us. We feel we can help you. Just lie down and relax. We’ll make this as painless as possible, considering all you’ve been through, and break this to you as gently as we know how.

Every know-it-all is right every once in a while. It’s just a matter of statistics. Throw out enough “facts” from your personal soup pot of wisdom, and one of them is bound to stick. Well, your uncle’s no-tide fact was just gooey enough to adhere. Who knows where he got it, but he got it right. Anyway, the Caribbean is one of a dozen or so areas around the world that has near-zero to zero tide. The sea just sits there. Doesn’t rise, doesn’t fall, despite the high and low tides circling around it along Atlantic coastlines.

Maybe that’s all you want to know. Maybe you don’t care why there’s no tide. But there’s a chance that knowing why will give you a leg up on unk, so maybe it’s worth the effort.

Tide stuff is complicated. (That’s how I cover my butt in case you don’t understand my explanation when I’m through.) Let me take a shortcut through some of the maze and ask you to imagine sitting at an outdoor café, staring into your coffee and swirling it around in your cup. This creates a small blip of coffee that rotates around the edge of the cup. Think of the cup as a big oceanic basin — the North Atlantic, f’rinstance. The coffee blip is the progress of high tide times as they circulate around the Atlantic coasts (the cup). High tide rotates around a point in the center of the coffee cup where the level of the coffee never rises or falls. Same happens in an ocean basin, and the center point of no tide is called the amphidromic point. It’s most often compared to the center point of the spokes of a bike wheel. 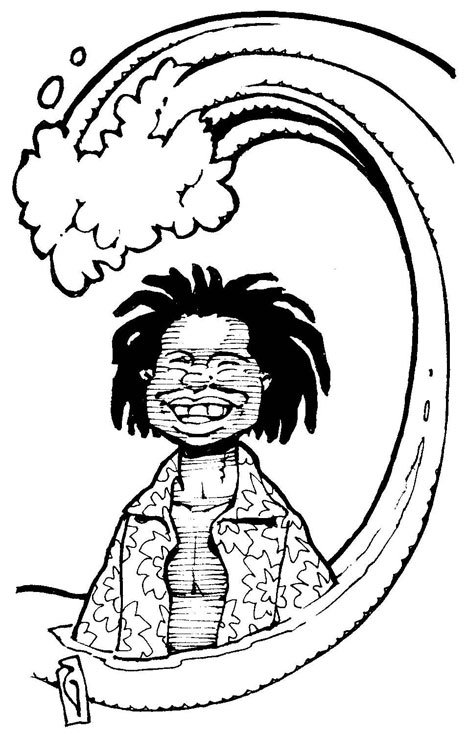 When you add up all the tidal influences — earth rotation, moon, ocean coast and bottom, and Coriolis effect — you end up with about a dozen amphidromic points around the globe. One of these happens to be right at the edge of the Caribbean Sea, making Uncle Genius correct. Coriolis effect, by the way, is the “force” that makes large water masses (high-tide masses) rotate counterclockwise north of the equator, clockwise south of it.

So, Anonymous, while you’re resting, go over the fine points of this answer, drink them in, and at some dramatic silence during the next family gathering maybe ask the Factmaster if he knows why he never got wet above his ankles in two weeks in the Caribbean. Then lay it on him. Even if it doesn’t shut him up, it should give him a new respect for his sort-of-intelligent nephew.

Wazzup, Matt? What is the difference between being a killer, a murderer, and an assassin? Is it the number of people you cause to die, the notarioty [sic] of the victim(s) or the method you use to cause death? By association, how wealthy, famous, or politically connected do you have to be to be assassinated instead of murdered or just plain killed? I don’t recall a headline about teens being assassinated in a gang-related drive-by or multiple people murdered by a terrorist car bomb. — Just Curious, Not a Killer, via email

I’ll take your word for it, but we are a little suspicious. So, “kill.” Plain vanilla word meaning you’ve taken someone’s (or something’s) life. ’Nuff said. “Murder” a little trickier. The crime of killing someone, especially with malice aforethought. Kind of a legal spin. Assassinations are sudden or secret attacks — especially killings for political reasons. The person is usually “prominent.” “Prominent”? Widely and popularly known. “Popularly”? Relating to the general public. Perhaps a small-town newspaper could talk about the assassination of its small-town mayor, since he’d be popularly known and maybe even related to everybody. Enough. Stop me, Merriam-Webster.