Andrew Cunanan's mom – from one who knows

Once his parents discovered that Andrew had an I.Q. of 147, all of the privileges were reserved for him. 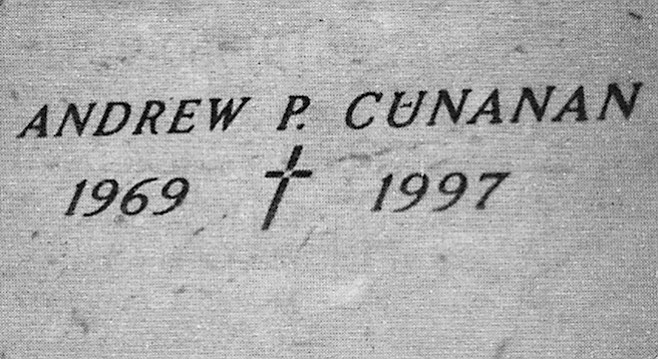 May 10 must be the year’s hardest day for Mary Ann. In 1997, her son, Andrew Cunanan, went on a killing spree that ended with the death of fashion designer Gianni Versace, on a sparkling day outside his mansion in Florida. In a final act of hatred, Andrew snuck aboard a houseboat and turned the gun on himself. A police photo of Mary Ann’s dead son is posted online. I hope she never sees it. No matter what our kids do, the umbilical cord is never severed.

Mary Ann has two other children, but I suppose it’s Andrew she dwells on. Where did she go wrong? How could this have happened? Mary Ann is a devout Catholic and my mom assisted her in making a shrine for Andrew, shortly before he went on his rampage. He had hurt his mother. Mary Ann didn’t express it in words, but my mother knew from looking at the bruises on Mary Ann’s upper arms.

The odor of burnt candles lingered between them as the two women set up a card table and covered it with a cloth. Mary Ann smoothed out the wrinkles and placed a statue of St. Jude in the middle and then surrounded it with pink and purple silk flowers. She placed her Rosary on the Statue so that it would be there when she needed it. Two candlesticks in containers and a bowl of holy water followed. “After it is blessed, it will be a comfort to me,” Mary Ann said. “The smoke from the candles will carry my prayers straight up to God.”

Since Mary Ann didn’t drive, my mother drove her out to the commissary at Camp Pendleton to buy coats for the grandchildren. Before becoming a stockbroker, Mary Ann’s husband had been in the military, so that was where she shopped. While standing in line, Mary Ann looked at her watch and declared, “I’ve got to get home to wash Andrew’s shirt. It’s the only one he has for work.” On the way back to Rancho Bernardo, she told my mom that the church had paid their past-due electric bill. 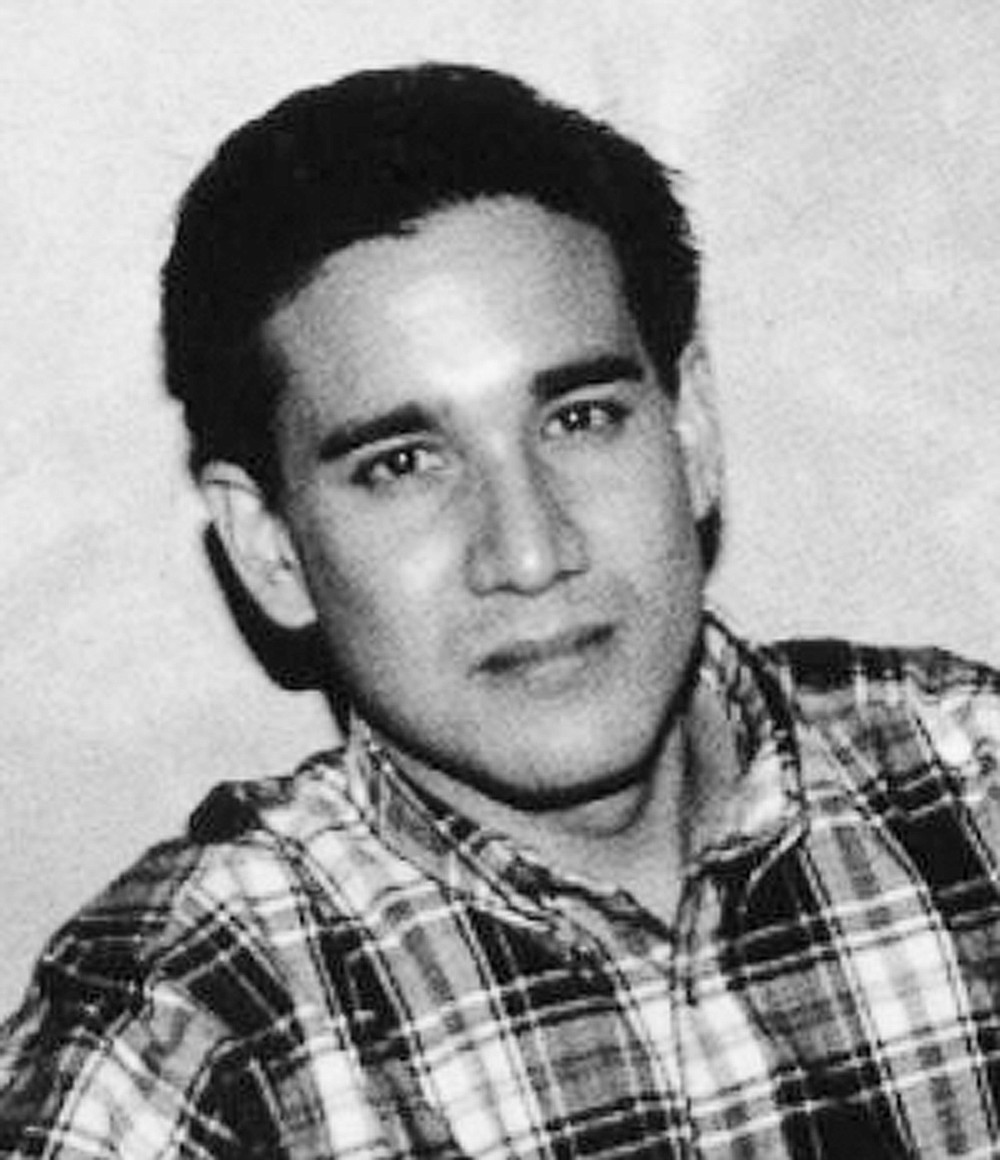 By 4 p.m., the hot day had settled on the cramped apartment, making it stuffy. Andrew was there and had washed his own shirt. He bristled at the sight of his matronly mother. “Why don’t you dress like Kate?” he asked. My mom’s jeans, leather jacket, and highlighted hair made her look like Mary Ann’s much younger sister, though they were about the same age.

After a spaghetti dinner, the two women were chatting over coffee at the kitchen table when my mom heard the freezer door pop open. A flying object hit the wall near Mary Ann’s head. Andrew had hurled a block of Thrifty-brand ice cream across the room, leaving a dent. “I only want Häagen-Dazs!” he shouted. Both women were stunned.

My mother and sister were impressed when they met Mary Ann in the nursery at St. Rafael’s Church. She worked there to make money, since her husband, Modesto, had disappeared in 1988. He had been caught embezzling his clients’ money, and for a time, his family hadn’t a clue as to his whereabouts.

Then Andrew caught wind that his dad was in his native home, the Philippines. Andrew flew over to visit him. What Andrew discovered sent shock waves through him. The father he so revered was living in a rundown shack. This shattered Andrew’s self image as a God-given prince. His own father had cultivated that image. He flew back to the states and began a downward spiral that he never recovered from.

My sister took my nieces to the Cunanan apartment, a single-story unit on the corner of Rancho Bernardo Road and Bernardo Center Drive, so Mary Ann could baby-sit. Andrew was rarely there, so Annie and Ava sat on his bed because the only TV was in his bedroom.

This is how it was around the Cunanan house, even before his dad abandoned them. Once his parents discovered that Andrew had an I.Q. of 147, all of the privileges were reserved for him. Andrew was the only child sent to the prestigious Bishop’s school in La Jolla. He occupied the master bedroom of the house, even though everyone else, including his parents, crammed into the other bedrooms. He grew up with a sense of entitlement and showed contempt for those more successful than he.

I met Andrew two years before he plunged downhill. His black hair was neatly trimmed. His tanned face was symmetrical and had dark, laughing eyes. He was a manager at Thrifty Jr., across the street from the apartment he shared with his mother. My mom and I went to the store to get band-aids for my heel, which had been rubbing on my shoe.

“Hey, Andrew!” my mom said with a big grin. “This is my other daughter.” He stood up from his task of stocking a bottom shelf and turned a bright smile on me. “Hi!” Just then, an attractive man Andrew’s age caught his eye. “He’s pretty!” he said, making no secret of the fact he was gay.

His mother seemed to have buried her head in the sand regarding his sexuality. She once showed us a photo album of Andrew with his “girlfriends” from high school. Maybe it was denial; maybe it was just wishful thinking.

Upon leaving the store, my mom said, “The older customers just love him here. He’s so patient with them.” Little did she know that he was pilfering their drugs to get high.

In June, my mom met me at her front door in her robe and slippers. Her irises were popping. She had been watching the news all morning. “Andrew is running around killing people and no one can stop him,” she said.

“Look!” she said leading me to the TV. “It’s all over TV.” I started following the story of Andrew’s wild ride. He first killed two lovers of his who had successful careers and whom Andrew thought had abandoned him. The other victims just seemed to be collateral damage.

“Aren’t you afraid he’d hurt you?” my mom asked. That thought hadn’t occurred to me.

Though the sun always smiles in California, it spares us little heartache. Three months later, I was at my sister’s house with my 11-year-old niece when the report came on the TV that Andrew had been found dead from a self-inflicted gunshot wound. My thoughts were on Mary Ann. Did she know yet? Would she find out from a news report?

Then I thought of Annie. I found her on the front porch, where she’d gone to avoid the news. Tears were threatening to overflow. “Was Andrew nice to you?” I asked. Her blond head nodded while she bit her lips to keep the dam from breaking. Thank you, Andrew, for not hurting my nieces.

The last time I saw Mary Ann, she was covered up in an old coat and sunglasses with a scarf tied under her chin. It was a hearty spring day that didn’t require a coat, and she dipped a hankie and washed her hands in a fountain at the Mercado shopping plaza. It takes a tremendous amount of faith to be Mary Ann Cunanan. I wish her a happy mother’s day.

Andrew Cunanan was the 449th person to make the FBI’s Ten Most Wanted Fugitive list, but the first from San Diego to do so, according to Wikipedia.