In Praise of T.O.

The T.O. Show debuted on VH1 Monday night and was immediately panned by critics. Detractors thought the show was contrived and phony, not like Big Brother, Ghost Hunters, Pimp My Ride, Dog the Bounty Hunter, Fear Factor, Wife Swap, Celebrity Rehab 2, and a couple hundred more.

It’s only been one episode, but, so far, I’d put T.O.’s show in the top 25 percent of the genre. The program opens with Owens moping around his Miami base camp. He’s just been fired by Dallas Cowboys owner Jerry Jones. Bummer. We learn Owens employs two publicists, Monique Jackson and Kita Williams, who, strange as this may seem, happen to be his close personal friends. Monique and Kita fly to Miami to be with their biggest client and closest personal friend during this dark, unhappy time.

T.O. is depressed and the publicists devise a plan to get him out of no-beach, no-nightlife, no-fun Miami to somewhere quiet so he can think about his future. A retreat kind of place, away from all the distractions brought on by the responsibilities of worldwide fame and adulation. One of the publicists explains, “The plan is to help Terrell work on his image, find him a quality woman, and figure out what the heck he’s going to do after football.” The publicists decide he should go to L.A., live in a hip mansion set in the hills overlooking Glob City, and get his life back together.

So, whaddya know, just like that, Terrell and his posse of one, sidekick Pablo Cosby, fly to L.A. and are met by his best friends, the publicists. The gang drives to a hip mansion, set in the hills overlooking Glob City, where T.O. will live with his posse of one, happily allowing his BFs to drop by every day and bitch at him for going to the clubs and partying. Clubs and partying in L.A....who knew?

The idea here, and in the arts generally, is you don’t want consumers to look behind the curtain. You want to make it so no one notices how much work it takes to make it look like it takes no work at all.

Regard the best actor in the series so far, ex-fiancée Felisha Terrell, who enters at the end of episode one. The two met in 2004, got engaged, then separated in 2006 due to Terrell’s infidelity. Duh. At least that’s what it says on the show.

The show was shot in March, and before that, one would assume Felisha had to have an agreement on money, sign contracts, and time to look over the storyline. She is a professional actor and has appeared in 15 episodes of Days of Our Lives, one episode of Entourage and Fantasy Island, and, briefly, in the 2008 movie Get Smart. She’s on T.O.’s show as ex-fiancée who may still love our hero. Does a good job, by the way.

There is nothing spontaneous about the show, and that’s a good thing. Spontaneity can be impossibly boring. While Felisha sits on her couch wondering if she and T.O. should reunite, there’s a 20-man VH1 crew in the room with her. More worker drones are back in the office and others toil away in postproduction.

The wretchedly hack dialogue is no worse than any other reality shows and better than most. It does the job. When you watch T.O. and Felisha, you don’t think about the dialogue, the film editors, the 20-man film crew; you think about the storyline, the beefcake, the gorgeous ex-fiancée, and Frick and Frack, the publicists.

Buffalo is a place where everything has gone wrong. The city has lost 55 percent of its population in the past 75 years, nearly one-third of its residents are classified as poor, unemployment is 15 percent and rising... Think of it this way: have you ever wanted to move to Buffalo? Do you know anyone who has?

T.O. is looking for work. Having your own reality show is not a bad way of auditioning for a job in Mediaworld when NFL days are done. This show is especially impressive since T.O. is the executive producer. He’s the man in charge of the product. He’s the boss, and he’s proved, indisputably, that he’s smart enough to be the boss. 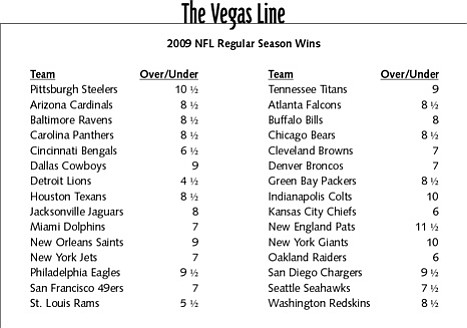 I finally caught a few episodes of the show. Not all that interesting, but I have to say...as much as I hate T.O. because of his antics (scoring touchdowns, and acting like an idiot when he does it), every time I've seen him in interviews. Or, when I saw him in an episode of this show trying to talk to his grandmother with Alzeihmers...the guy always impresses me. It's just so strange that he can treat fans so well, and his family...yet teammates can't stand him. Especially when he's one of the best players on the team. You think they'd give him some room for his ego. He must really be a headcase in the locker room.