Adriana Smith and Ghost in the Graveyard

In 2007 Rolling Stone ran a cover story marking the 20th anniversary of Guns N’ Roses debut studio album Appetite for Destruction. That same year Marc Cantor, early-days photographer for GNR, wrote a book, Reckless Road, and Slash wrote his own book, both documenting everyday life of the band during the late 1980s when they rose from Sunset Strip squalor to stadium-rock legends. 2007 was a big year for Guns N’ Roses publicity. In each of the publications, Adriana Smith is mentioned briefly as being the voice heard during the break on “Rocket Queen,” the last song on Appetite for Destruction. (How she got on the album is a story of rock-and-roll frivolity; Axl had Adriana in the studio, he wanted something special for that track, and nature took its course. If it’s not apparent by now what key vocal elements Adriana lent to the song, you’ll have to find it for yourself and have a listen.) Scrabbling for any scrap of notoriety, Adriana has melded herself with the ignoble tale and taken the moniker “Rocket Queen” — branding every bit of her persona with the title and even saddling her band with it (check the website info).

Her intimate time with Axl in that New York recording studio, doing what comes naturally to young rockers, seems to be the last decent thing Adriana has done anywhere near recording equipment. War in the Graveyard is unlistenable because of her off-key warbling and caterwauling. The band minus Adriana is respectable in a backyard, high school, just practicing sort of way, but combined with her singing, better sounds can be heard by striking a screwdriver against concrete. 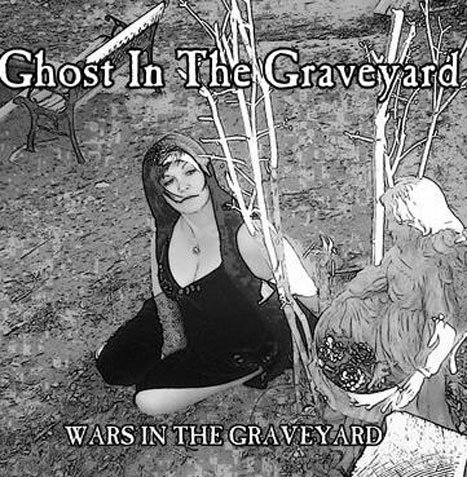