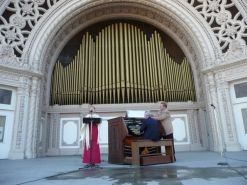 San Diego’s unique and historic outdoor pipe organ in Balboa Park celebrated its 94th birthday on Sunday January 4, 2009, in honor of which the San Diego Park and Recreation Department, in cooperation with the Spreckels Organ Society, held a free anniversary concert. Concert-goers on this afternoon were  treated to a special surprise: they were allowed to go inside the organ  building and see all the various pipes and instruments and listen to the organ from within where the volume can reach over 120 decibels, louder than a rock band. Civic organist Carol Williams was slated to play at this birthday  concert with a special ensemble of bagpipes, but unfortunately she came  down with the flu. In her absence, former civic organist Jared Jacobsen  played the organ.

The Spreckels Organ was first heard on New Year’s Eve in 1914 for the opening ceremonies of the Panama-California Exposition in Balboa  Park. The organ was built by the Austin Organ Company of Hartford, Connecticut, at a cost of $100,000. It was donated to the city of San Diego by John D. Spreckels and was America’s first outdoor organ.

Free concerts will be held at the Organ Pavilion every Sunday at 2pm for the remainder of January.