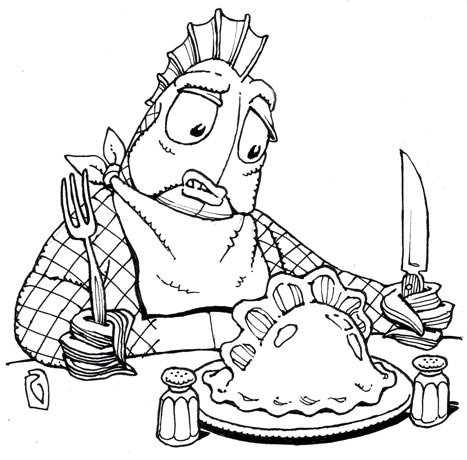 We took the kids to the aquarium, and that got me to thinking about what eats what in the marine environment. Little fishes are pretty much lunch for bigger fish, but they also have ways of protecting themselves. They can either swim fast or hide in rocks or something else. But then I thought about jellyfish. They have no sharp fins, and they can’t travel very fast. They have stingers, but they use them to catch their own prey. I would think they’re pretty easy to catch. They don’t look too tasty or nutritious, but is there something in the ocean that eats jellyfish?

— Curiosity got the best of me, at the beach

I don’t know how tasty they are, but they can’t be too nutritious. About 97 percent of the average jellyfish is water. They have no hearts or brains or much of anything else except tentacles, extendable mouths, stomachs, and reproductive organs. A real streamlined critter, even though some of them can get six, ten feet wide or more. Despite this unpromising plateful, quite a few sea-dwellers dine on jellyfish. Sea turtles are probably at the top of the list. They even migrate to find the most promising jellyfish areas. And certain kinds of the larger rockfish, sunfish, and crabs will nip away at jellies. Salmon and sea birds chomp up some of the mild-stinging varieties.

But jellyfish are pretty efficient cannibals. Comb jellies love a meal of comb jellies. They can engulf dinner in a single mouthful, even if the entrée is as big as the diner. (Stingless comb jellies are actually jellyfish cousins, as scientists see it.) But best of all, under certain circumstances, jellyfish will eat themselves. When food is scarce, a jelly can consume its gonads and other noncritical body parts and shrink itself so it won’t require as much food.

So let’s end with the most disgusting jelly predator: man. In Asia (principally China, Vietnam, and Japan) jellyfish are key ingredients in various stir-fries. And if you too would like to harvest your own jelly and invite friends over for an exotic treat, here’s how you prepare them. Scoop up the jellies, remove everything but the umbrella and the fleshy mouthparts, dust them with salt and alum, and set them aside to dry 20 days or so with a heavy weight on them. This ensures that when they’re ready, they’ll be dry and crispy and crunchy, which is apparently the hallmark of USDA Grade A jellyfish. Chop the jellies into strips, and throw them into your favorite stir fry. If that’s too much work, dried jellyfish are sold in Asian markets. And one of the newest vending machine snacks in Japan is a package of dried jellyfish and dipping sauce. So, Curiosity, jellies are hunted down by everything from sea turtles to mankind. A hectic life.

While watching the show America’s Deadliest Catch, the narrator kept referring to the rookie fishermen as “green horns.” Now, I did not notice any budding horns on their seemingly smooth skulls, but I am still at a loss: Where does this name come from?

Anything new or young has been called “green” since the Middle Ages. Think plant sprouts; no matter what the color of the adult plant, the sprout is green. By the 15th Century a young cow just sprouting horns would be called a greenhorn. Now it’s anybody who’s new on the job, without the necessary skills. Better to be a greenhorn than a tinhorn, which is a cheap, low-class gambler. Comes from a low-stakes American gambling game in which the dice are shaken in a tin cone. The game attracted all the shady characters, who became tinhorns.

I Vaughn to Be Alone

I would like to dispute something that Matthew Alice said in his column of September 4.… He says that “Vaugh” is Welsh for red. That’s not right.… I looked in a Welsh dictionary…under “red,” nothing at all. I looked in all sorts of mutations. Welsh is a very strange language, and a word can begin with several different consonants. I looked in a Random House dictionary, and it says Vaughn is a boy’s or girl’s name. So I have…The Meaning of All Common Given Names, by Miriam Allen Ford.… I looked up “Vaughn,” and it says, “Vaughan or Vaughn: Celtic, short in stature.” So I look in my Welsh dictionary under “short.” Nothing that resembles “Vaughn,” but then let’s try “small” or “little.” Sure enough, under small and little, one of the words is “Man.…” And one of the mutations of that word is “Fan” [pronounced “vaughn”]. So there you go. Evidently Vaughn means little or small in Welsh, and in Celtic long ago it meant short in stature.

Thanks, Bob. The elves and I are pretty much exhausted from your explanation. Grandma is fanning our brows with quesadillas, so we’ll be okay soon.