Artist: Nature of the Beast

Perhaps one reason scratching has quietly slinked further away from hip-hop is that it is just better than what’s out there these days; the current trend in hip-hop is to amplify the worthless and hide the great. I offer as exhibit A Eminem, who obviously influenced MarkmyWords. Mark’s voice reaches for that grating half-whine gravel of Em and unfortunately grabs it all too often.

MarkmyWords is a competent rapper. He’s got that quick-rap ribbety-flibbety-gibbet thing that when used judiciously adds a bit of texture to an album, and that is definitely his strongest (if not only) selling point. He seems unable to write a lyric that hasn’t been rapped and re-rapped hundreds of times. His topics are cliché — pleas for pity for hungry kids in the ’hood; boasts of sexual, fighting, and musical prowess; and what he can do to other deejays and emcees who stand in his way.

Track two drops with a brassy ’70s cut that would be at home in a cheesy kung fu movie or a Quentin Tarantino rip-off of the same. Track five is probably my favorite cut, with American Indian chants and imaginative scratching without much lyrical stamping from MarkmyWords.

Thankfully, the duo employs far fewer high-flying synthesizers than is popular on the radio, and they cram in an incredible amount of scratching and loop mixes…sometimes too many, as it clutters up the songs. As a scratch fan, I’m glad I caught this album. DJ Sinn might be San Diego’s finest turntablist. Pick it up for the scratching or find DJ Sinn’s solo work. 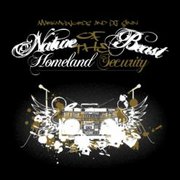 No MP3s are currently available for this album.

More on Nature of the Beast

Nature of the Beast is dope. If you dont believe it then check them out live they rip S### harder than most. Trust me I know.

Wow..someone pissed in homies Cheerios recently....I highly disagree with what the reviewer has to say...this is supposed to be an informative publication and not a tabloid. Props to Nature of the Beast for a quality release amongst the piles of watered down bull s*** this city has to offer..Hip Hop isn't just music it is a culture and it's obviously not your Ollie...

Ollie, I'm disappointed in you. Did you even listen to the album? There are plenty of hip hop albums full of cliches, but this definitely isn't one of them. Rippity-flibbety-gibbet? That's not even proper English.

"He seems unable to write a lyric that hasn’t been rapped and re-rapped hundreds of times". This is the main problem with rap in general. Since it's big boom in the 90's everyone thinks they're "dope" and has jumped on the rapper train. Sure, maybe they can write a catchy line (or jibba jab) here and there, but for the majority nothing new has been said for quite sometime. Of course, there are the exceptions out there, as there will always be, but damn people - get with the program. Stop regifting.

You see why i'm starting a San Diego hip-hop magazine?

I mean cmon, Ollie shouldn't even be reviewing hip-hop albums. His one reference to any even slightly relevant artist is Eminem? I mean really?

And that is the problem with Citybeat and the Reader. They don't hire any writers or assign CD reviewing duty's to anyone who even listens to hip-hop. It's like, "Hey you live in north Park and like indie rock? Your Hired!"

It's like they live in 1983 and still think hip-hop is some new emerging music genre that's probably just a fad and will be gone soon so there's no point in recognizing it anyway. Wake up. (sorry for the never ending sentence)

N.OT.B. album has it's flaws, but the truth is it is a solid, well produced, INDEPENDANT hip hop record.

Mad love to you NOTB!

This reviewer is actually better then some bonehead from SD who is just going to be biased and review most (or all) of SD Hip Hop as fresh because either they're either:

A) Homies or B) Wanting to show "mad love" to the SD Hip Hop Scene and put it on the map.

No where in the review does the reviewer try to imply rap is a fad. If anything, it's quite the contrary only stating what many feel. That so many "artists" out there are just regurgitating a lot of the same rhymes, beats and styles. It's tiring, and sad. It does show though, that those (few and far between) who can emerge as original now days really have a skill and are a nice breath of fresh air. If this were the case with NOTB, I have no doubt we would have heard it. It's just same ol' stuff, thrown up in a slightly different puke color.

Mark has been tearing it up since I was a kid! Back when Bobby Brown was singing "Mr. Telephone man!" I remember when I was in LA in the Viper Room and found out NOTB was performing. This guy came out with a Boston BBall cap full of Dodger fans, and turned that place into a the most happening in SoCal that night. More people showed up there then a protest for prop 8 in San Francisco! NOTB is off the hook!!!

Wow. Well thank you for reviewing the album. I definitely think that an emcee that only uses the word f#@k three times on 14 songs, and doesn’t mention women other than saying his wife is pregnant is far from cliché. But at any rate thank you for the coverage.

And towelheadedcameljockey, listen to the music before you start using us as an example of recycling material. He can bash on it if he wants to, he listened to it, but you might actually be surprised. This album has been out for less than 4 months; we've done 6 shows. Give it time; you'll start hearing about us soon. But the best part is, you probably won't remember this review when you turn to your friends to tell them how dope we are.

Everyone else, thank you for all your support... NOTB

One more time yall: His topics are cutting edge — chants for the next generation of hungry hip hoppers the world over; boasts of sexual, fighting, and musical prowess; and what he can do to other deejays and emcees who stand in his way.

Beast, I'm sorry you needed me to claify, I've heard you guys and the only thing I'd give is a slight sholder shrug and a "eh" to those next to me. It's a very typical rhyming style. Sure, not typical of what's playing on the radio, but typical as far as hip hop circuits go.

I figured posting my general opinion as to why so much of rap is lacking, kind of covered that.

There's actually a link on this site to hear one of your tracks for anyone who would want to check you guys out that haven't heard of you.

MarkMy isn't terrible, and there are PLENTY of others I'd like to see wiped off the map who are just plain garbage.

BUT, writing about your wife, or baby to be, doesn't score you any originality points. Sure, it's sweet and I'm not knocking that aspect of it. But just because you do that, it doesn't mean you've got originality. People who think that's original, still think crews like Living Legends are "underground", or unknown.

Regardless, you obviously have more supporters on here then knockers. And, I'm not even trying to knock you, I'm just voicing how I feel about a lot of current hip hop in general....so much nothing new.

No doubt. I understand what your saying for the most part. I wasn't saying that I rhyme about my son and wife to you to prove my originality, I was saying that I thought Ollie's line about me rhyming about my "sexual prowess" was a cop out. Because the only thing I say about women on the whole album was one line about my wife being pregnant.

At any rate, thanks for making my song the number one download on here.

Well, get your song downloaded the most this month and we do another interview; you can tell me what an a-hole I am and how wrong I was.

I couldn't disagree more with Ollie. I am a Hip-Hop enthusiast and I have to say Markmywords keeps gettin better and better. Every album he has dropped (while all are first-rate) show growth in all areas, lyrics, beats, production, and delivery. I feel this is his best work to date, hands down. I also feel to fully grasp what MMW is saying in his rhymes one must cycle the tracks more than once. He is so witty sometimes it takes the average listener a few times through to figure out how in depth his lyrics truely are. Furthermore I also happen to be a scratch fan, while I do agree with Ollie when he says "DJ Sinn might be San Diego’s finest turntablist" I feel Sinn only put the finishing touches on a well tuned product.

im a NOTB groupie too, mmw is a very talented rapper and i dont know why everyone got so fired up about a review by some guy that brought us hard hitting stories such as "Rubber Duck and Ceramic Cat on the Lam" we all know how talented mmw and notb is and i cant wait until their next album.

this reviewer shouldnt even be reviewing hip-hop. he is comparing markmywords with eminem for what reason? becaues he is white? there is NO other connection. the two rappers sound NOTHING alike. it sounds like racists still can not find a way to give props to white rappers. you want to know why they put scratch on their albums? because they are not the mainstream radio type hiphop.