Considering they’ve been making noise and upsetting parental status-quo sensibilities since 1980, it’s not only a pleasure to be on the receiving end of fresh Bad Religion albums every 24 months or so, it’s also downright heartening. What’s weird is when I was asked to talk about Bad Religion, it was around the time I had to do the [concert] commercial for our radio station. It’s always more fun doing the concert spots. You can be that guy with the rock voice that’s telling the fans “…if you don’t show up, you’re a weenie!” 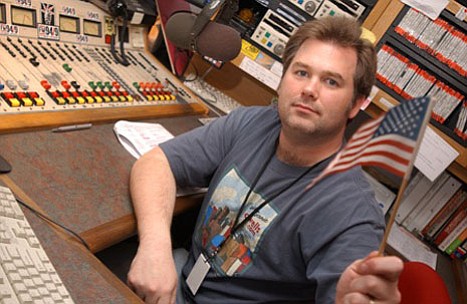 The clients usually have all the copy written out for you, which is fine. It makes things easier. Other times, they just have bullet points written out. It’s easier to have them give you more copy that you can cut than for you to try to bulk up the spot. Voicing and producing them is so much easier in the digital age. You have an undo button if you don’t get it right. Whether you’re using Adobe Audition or Pro Tools, it’s better than the days I started in radio, where you had to just keep doing it and recording over it. If you didn’t line the songs up at the right spot, it’s frustrating.

But, because I’m a fan of the band, putting this Bad Religion commercial together was simple…more fun than if I was doing one for Michael McDonald and appealing to housewives on Percocet or the bed-ridden.

Tommy turned out to be a great writer, and very knowledgable about this band. Because of length, we had to cut a lot of his story. Here's how one of his earlier drafts was turned in to us.

Considering they've been making noise and upsetting parental status-quo sensibilities since 1980, it's not only a pleasure to be on the receiving end of fresh Bad Religion albums every 24 months or so, it's also downright heartening. Like their Southern California punk peers Social Distortion, Bad Religion has kept the punk flag flying, with and without Brett Gurewitz, in an out of passing fashion, with and without big-name producers and labels, and while Social Distortion long ago laudably veered off into Johnny Cash meat-and-potatoes workingman's punk, Bad Religion has kept it's biting politics cleverly shrouded in metaphor and ripe for poring over lyric sheets in between sheets of guitar and galloping drums.

For favorites I'll take "American Jesus" for the sheer intuition of the-then growing U.S. evangelical movement, equating Christ with wrestling hero without digesting any of the savior's messages of hope, peace, good news, tolerance, humility, and forgiveness. The ominous tones of Christ as a rallying cry for nationalism continue to come too close to comfort on these shores, and even in 1993 Bad Religion, with all of it's guitars and brains, saw the writing on the wall about the growth of the American Jesus-As-Powerful-Enabler and didn't give it a free ride, tackling head-on the Touchdown Jesus willing to forgive whatever sins, however horrendous, if only you accept a star-spangled justification for bloodlust and handing over your checking account number. Good stuff from a band that was already a veteran act by then, and a three-minute warning about the sexy, dry drunk thrills of rudderless mass religious mania as fascist ecstasy meets stadium rock. God help us. Have we come so far from fast cars and good times? When have lyrics like these ever rang more frighteningly accurate? "I don't need to be a global citizen/because I'm blessed by nationality/I'm member of a growing populace/We enforce our popularity." Further proof being an American means never having to say you're sorry, because if God is on our side, who could be against us? "At least the foreigners/can copy our morality." Is there anything more tragic in current American culture? Bad Religion could easily be discussing war machines or ad campaigns, from the obvious jabs at Big Money and Big Corporations behind the patent leather veneer of Big Market Spirituality to "The form letter that's written/by the big computers/he's the nuclear bombs/and the kids with no moms/and I'm fearful that/he's inside me."

I'll also take "A Walk" from 1996's The Gray Race, further proof songwriting can be approached as an academic exercise, where you take anything you've done over the course of the last week and rub two minutes out of it. If Rivers Cuomo tried this he'd get hit by a bus while fiddling with his slide rule. For an additional runner-up I'll go with "Los Angeles Is Burning," which just as easily could've been about a sweaty Steve McQueen driving laps up and down the Golden State Freeway packing heat the week of the Manson Murders in L.A. as it is about the 2003 Southern California fires. The band gets extra points for resisting the urge I certainly would've had of including fire engine sound effects and worried emergency radio traffic recordings on the track. Hey, sometimes a song functions just fine as a song. Final runner-up kudos to the staying power and depth of "Sorrow," from 2002's The Process of Belief, which broaches the hope of a father and son reconciliation despite the hammy "kings and queens" lyrics, and we get the key line "Or when the only true messiah rescues us from ourselves." Now, there's something I'll pray for.

Note to emo bands: go mow the lawn, and come back when you learn to let your songs breathe like Bad Religion. I enjoy yoga, but you're not a rock and roll band when your management buys you matching exercise outfits and schedules a tea time for you. Even Journey was sponsored by a beer company fellas.

Tommy Hough is an outdoorsman, environmentalist, and air personality at San Diego's FM 94/9, and tragically, a former English major.