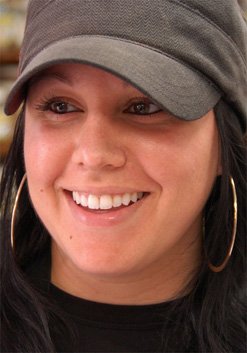 Gotta be careful here. To say something’s the best. But…oh, to heck with it. This is the best freakin’ sandwich I can remember munching, okay? It’s enough to make a vegan out of me.

I’m in Silver Strand Plaza, where I.B. begins. Imperial Beach. Actually, I’m in a health-supplement store. Seacoast Vitamins and Herbs. Chaldean–Mexican-American family runs it. Well, the two daughters do. Frances, who’s, like, 22, runs the store, and Vanessa — she’s 26 — started up this organic cafe inside the store last fall. And that’s where I’m sitting, at one of the tables by the kitchen, facing a green bowl of lumpy golden soup and a plate with this hunk of vegan paradise on it, this bi-ig focaccia sandwich, loaded, beautiful to look at.

“You eat with your eyes first!” Vanessa said when she brought it over to me.

So true. The sandwich is cut diagonally, so you can see the archeological strata of everything they put in there. The creamy green of the wasabi mayo, strewn with parsley, the green lettuce, the white and green sprouts, the red slash of sun-dried tomatoes, the cream of mashed butternut squash, the purple-brown of the layer of roasted eggplant, oozing gold of caramelized sautéed onions, and more green wasabi mayo. You hate to wreck the thing, but man. What a taste! Truly, since it’s vegan, I was expecting blah-on-blah, cardboard. Only reason I asked for this “Baby Greens” vegan sandwich ($8.99) in the first place was to be spartan, one of the boys, seeing how this was a health store and all. Even though they have meat here too, like the “Chicago Way,” roast beef with horseradish, and turkey (both, $8.99), and some pretty interesting salads (like the $9.99 lime-and-cilantro chicken salad, and the strawberry-and-spinach, $8.99). There are even some delish-sounding vegetarian paninis I could have gone for, like the “Appallonia,” with grilled apples, vegan “bacon” (or real bacon, if you want), cheddar, and red-onion mayo ($7.99).

But no. Martyr complex, I guess. So I ordered this “Baby Greens,” the most gutless-sounding sandwich of all.

The first taste of the garlic and the eggplant and the tomatoes and onions and squash…mixed with the focaccia…I can’t tell you. I’m so surprised, I can hardly swallow. Sandy, lady at the table next door, sees my expression and asks, “You OK?”

“Uh, yes.” I mean, not to go over the top. It’s just a damned sandwich, but the taste has me thinking like a wine connoisseur. The textures, the marriage of rich and delicate flavors, the nice touch of caramelizing, the grippy, the slidey. Bold, earthy... For Vanessa, and for uncardboard-like vegan food, this looks like a very good year. To be really true to the wine-tasting comparison, I’d have to spit it out. But hey, no way.

Sandy’s sipping the soup of the day, potato and leek ($3.99). In a crazy moment, I order that too. It’s a thick, tongue-caressing spuddy-leeky treat. Lots of other stuff in there, carrots, celery, garlic. Can taste bay leaf and white wine. Imagine! Here, surrounded by vitamin pills, we’re into gourmet.

Turns out Vanessa has been a precocious foodie since forever. She had to wait till she was 12 before her dad let her start making sandwiches in their liquor store–deli in Lakeside. “I experimented on the customers all the time,” she says. Finally, her mom Gladys (who’s bustling around the place too) and dad sent her to Italy, to the Leonardo da Vinci Culinary Academy in Florence. Cordon Bleu. “Everybody ate rich, but good, organic foods over there,” Vanessa says, “yet they stayed thin. It’s because they carry things, they walk everywhere! We’ve got a long way to go here.”

Many of the cafe’s customers have problems, like diabetes, liver problems, gluten intolerance, and Vanessa cooks to accommodate them all.

I ask her how come this sandwich is so tasty. She says she tries to buy seasonally, local, organic. “But there are rules,” she says. “You eat with your eyes first,” she says. “That’s important. A sandwich has got to have colors. And height. Lots of stuff inside. The bread: Got to be interesting. And above all, a sandwich must have flavor. Vegan doesn’t have to be tasteless! And, God first. I pray over every dish I make. ‘He’ makes them.”

Then she’s back in the kitchen. I look around. It’s bright out here. The walls are sky-blue, light green, and gold, and a black marble counter angles across the back corner. There’s some pretty good art on the back wall, by a local artist.

But the thing I notice most is how when people come in, they kind of let out a big breath. They take things off. They sit down, like this is where they can let it all hang out. Sanctuary. Like Teresa, who’s diabetic. She sits at the table next to mine and also orders the soup. She says Frances has saved her with the liver detox supplements she’s given her.

We’re all talking. And damn. If I’d held back on the soup, I would’ve had enough change to try one of the organic apple strudels ($2.99) or the chocolate brownies, vegan, zero-gluten.

“Iraq,” she says. “He’s Iraqi Chaldean. He’s over there doing intelligence work. He’s been there four, five years. But when he comes back, he’ll be pretty proud when he sees what Frances and I have done with this cafe.”

Wow... this review totally had me putting the address into my Navigator so we could try the place while we're in Imperial Beach for the US Open Sandcastle Competition this Sunday... then I saw it's not open on Sundays! OH NO! :(