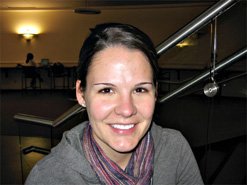 Tell me about it.

“It’s about a lady who is getting a divorce, and she’s trying to keep her daughter. The daughter has an imaginary friend, and she’s actually starting to see spirits. But the mom isn’t believing it because they just were never very religious.”

What do you make of the plot and the writing?

“Picoult gives a lot of detail — she’ll talk about how people are clothed or the way a blanket is draped. But not to the point where you just get bored and lost. It’s very easy reading. She’s good at tying everything together, making you understand where you are at throughout the book.”

“Probably the daughter, Faith. She’s struggling with her mom, who is definitely having problems with the divorce, and isn’t paying much attention to Faith. She doesn’t understand why her mom won’t love her. She’s well written; she has the personality and beliefs of a child, and she puts all of her trust in this imaginary friend, who is full of purity and innocence.”

Do you have a favorite passage?

“Mom finds the little girl, Faith, climbing on top of her swing set. Mom asks, ‘Why are you doing that?’ And Faith says, ‘My friend told me to do it.’ That’s the beginning of her imaginary friend, and you’re kind of drawn into it.”

Compare this with other books you’ve read. What sort of books do you like?

“Books that have situations that could for sure happen in real life. I was reading Jennifer Weiner’s books for a while; they’re very similar to Picoult’s. They tell about female lives in a realistic way — but with a little bit more drama than my life has. I like to be able to relate to a character. Also, I rarely get time to read, so when I do, I don’t want it to take too much concentration. I just want to sit down and enjoy reading it.”

“Honestly? The Bible. Growing up, in church, they would refer to passages to get you through everyday situations. It’s something that I’m always going to have with me. I go back and forth on reading it and not reading it, but it always holds meaning for me.”

Do you have a favorite author?

“Right now, it’s Jennifer Weiner. I’ve read four of her books, and loved them all. They’re about different women in different cities with different lifestyles. The most recent was Goodnight Nobody: A Novel. That was about a woman who moves from New York City to Connecticut — she’s settling down into the suburbs, becoming a housewife. Another woman in the neighborhood gets killed, and it becomes the main character’s hobby to try to figure out who the murderer is. The book was funny, sad, and suspenseful.”

“I read the Union-Tribune and People and the gossip magazines. In the Union-Tribune, I probably read only one article to the end, or do the crossword puzzle. In People, I like to look at the pictures — I’ll read it, but only every now and then.”

“I have a good friend at work. She has very different tastes in books, but we talk about what we’re reading. She was recently reading a book on psychology — sensing and understanding. She reads more intellectual things than I do, but I like it because she introduces me to different ideas.”