Not to fear, Joseph

A number of spiritual currents ran through the service on the Sunday before Christmas at Hope United Methodist; several made themselves felt within the choir’s opening set. We began with the traditional: a straight-up rendition of “Hark the Herald Angels Sing” — no complicated harmonies, just voices over piano, with a gentle cymbal keeping the beat. Very much of a piece with the creche on the altar — the Baby Jesus not yet lying in His manger.

Then something a touch more progressive, a slow, almost wistful anthem that stressed humanity’s part in manifesting God’s presence: “Emmanuel/ Emmanuel...God with us/Revealed in us...” Reflective, perhaps, of the church itself, with its nave standing in for the face of Christ, and a long adjoining building serving as His outstretched arm.

And finally, a kind of self-critical hymn about hymns: “I’ll bring you more than a song,” they sang, “for a song in itself is not what you have required... I’m coming back to the heart of worship, and it’s all about you, Jesus/ I’m sorry, Lord, for the thing that I’ve made it/ when it’s all about you...” It caught something of the self-conscious introspection that would show up later in the liturgy.

We sat, and a couple ascended the steps (swathed in potted poinsettias) to light the four candles of the Advent wreath. “A Candle is a small thing,” pronounced the woman, “but one candle can light another...” The people responded: “When one mind illuminates another, when one heart kindles another, when one hand holds another!” “We light the candle of Love to inspire our living...” And the people sang in response, a folksy song of personal fulfillment through Jesus: “I am the light of the world... If you follow and love/ You’ll learn the mystery/ Of what you were meant to do and be.”

The children came forward, and Youth Pastor Carrie Jaquess-Gutman addressed them as they huddled on the sanctuary steps. “Do you love to open presents?” she asked them. “I have a secret for you. As much as you love opening presents, your parents love to give you presents. You might hear us complaining about how much things cost...but we love it.... The Bible says that as much as our parents love us...God loves us so much more.... We can’t really measure it, but there is a word for how much God loves us: Jesus.... It’s so much better than what your parents could buy you.... So pray and thank God for that gift.”

A stately gentleman read from the Gospel: “Now the birth of Jesus the Messiah took place in this way. When his mother Mary had been engaged to Joseph, but before they lived together, she was found to be with child from the Holy Spirit. Her husband Joseph, being a righteous man, unwilling to expose her to public disgrace, planned to dismiss her quietly.” But, of course, an angel appeared to Joseph in a dream, and told him not to fear, but to marry Mary and name the child Jesus. 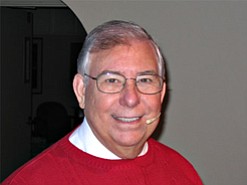 Before his sermon, Pastor Dick George asked us to join with him in prayer, a fascinating blend of modern and ancient lingos: “Creative Spirit of God, come as the earth and sustain us. Come as the wind and stir us. Come as fir and transform us...until we are all yours. We pray through Jesus who is our Christ, our healer, and our redeemer.”

His sermon was titled “Christmas Comes as a Child,” and focused on our need to “receive the kingdom of God as a little child” in order to enter it. “The first Christmas,” he preached, “required a man to set aside his principles and embrace a dream — God’s dream.” When the angel came to Joseph, “the first thing out of his mouth is ‘Do not be afraid,’ and it is here that we have the key to why Joseph wanted to be righteous: he was afraid of what people would think...say...do... Christmas hinges on persons who can break out of their conventional life scripts to entertain and respond to new, extraordinary invitations that seem to come out of the blue — or maybe just from the Holy Spirit.... As adults, we often lack imagination to entertain what God offers to us.”

Three quilts hung in the vestibule as we left, each offered for a member of the congregation, and each dotted with pairs of loose strings dangling from the centers of the quilted squares. As we left, many people stopped to tie the strands, their heads bowed in quiet prayer.

What happens when we die?

“My experience and belief say that we don’t really know specifics,” said George, “but it’s going to be grand. We will be released from anything that we’ve experienced here on earth that has held us back, and we will become fully what God always envisioned us to be.”