Down the Arroyo Seco

The Spanish colonists who christened Arroyo Seco (“dry creek”) evidently observed only its lower end — a hot, boulder-strewn wash emptying into the Los Angeles River. Upstream, inside the confines of the San Gabriel Mountains, Arroyo Seco is a scenic treasure — all the more astounding when you consider that its exquisite sylvan glens and sparkling brook lie just 12 to 15 miles from L.A.’s city center.

On the one-way downhill journey described here, you’ll travel the westernmost leg of the Gabrielino Trail, which receives considerable use — and also a lot of much-needed maintenance — by mountain-bike club members. The upper and middle portions of the route, which are in places narrow with steep drops to one side, are challenging even for expert riders, although not at all hard for hikers. The lower end consists of remnants of an old road built as far up the canyon as the Oak Wilde resort (now Oakwilde Campground) in the 1920s. Several rest stops and picnic sites line the trail’s lower half, making this a great route for a leisurely saunter. Most of these stops are located on the sites of early tourist camps or cabins erected in the early 1900s.

The starting point, Switzer Picnic Area, is one of the most popular destinations in the San Gabriel Mountains. Plan to arrive early — gates normally swing open at 8 a.m. By 10 a.m. on weekends the picnic area’s adjacent parking lot is usually filled to capacity. Overflow parking is available at the well-marked entrance to the picnic area, at mile marker 34.2 on Angeles Crest Highway, ten miles from Interstate 210 at La Canada. If you park at this entrance, you must hike down a narrow paved road to the picnic area, adding 0.4 mile and 250 feet of elevation loss to your one-way trip. Note that a National Forest Adventure Pass must be posted on your car. You’ll finish the trip, nearly ten miles later, at the corner of Windsor Avenue and Ventura Street, a mile north of Interstate 210.

From the west end of Switzer Picnic Area, start hiking on the signed Gabrielino Trail. Make your way past outlying picnic tables and then down along the alder-shaded stream. In a couple of spots you ford the stream by boulder-hopping — no problem except after heavy rain. One mile down the canyon you come upon the foundation remnants of Switzer’s Camp, established in 1884, later abandoned, and now occupied by a trail campground.

Walk down to a fork in the trail 0.2 mile beyond the trail camp. You will probably hear, if not clearly see, the 50-foot cascade known as Switzer Falls to the east. Your way continues on the right fork (Gabrielino Trail), which now begins a mile-long traverse through chaparral, which detours around the virtually impassable Royal Gorge section of the Arroyo Seco.

At 2.3 miles (from the start) you join a shady tributary of Long Canyon, and later Long Canyon itself, replete with a trickling stream. At 3.4 miles, the waters of Long Canyon swish down through a sculpted grotto to join Arroyo Seco. The trail descends to Arroyo Seco canyon’s narrow floor and stays there, crossing and recrossing many times. You pass Oakwilde Campground on the right, and continue on a more gentle gradient. There’s a sharp climb at 5.3 miles — to bypass the large Brown Canyon Debris Dam — and then a long trek out to the mouth of the canyon with no further significant climbing. Toward the end, the trail becomes a dirt road, and finally a paved service road, complete with bridged crossings of the Arroyo Seco stream. During the last couple of miles you’re likely to run into lots of cyclists, joggers, parents pushing strollers, and even skateboarders. 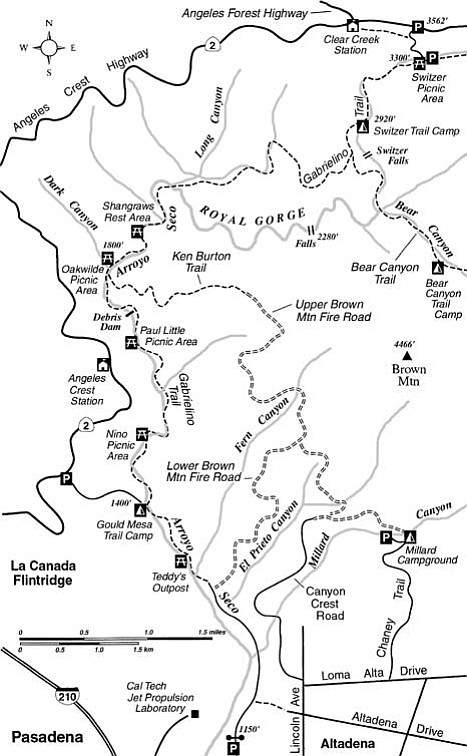