With two steep ravines spanned by quaint footbridges, scores of well-kept, historically significant homes, and mature landscaping, Banker’s Hill is a monument to the elegance of the past. The work of early-century architects Irving Gill, William Hebbard, Richard Requa, and Frank Mead is represented throughout the area. Much can be seen on the following 1.5-mile walk, which begins on Spruce Street at First or Second Avenue, just west of Balboa Park.

Start by walking east on Spruce Street. Past Third Avenue, on the right, is a low building designed by William Hebbard in 1913 and apparently stylized after the long-gone San Diego Cable Railway powerhouse. The cable-car line went into operation in 1889, carrying passengers from downtown through Hillcrest to Adams Avenue.

Walk south on Fourth (there’s a sidewalk on the east side only) until you reach the Quince Street footbridge (1905), built across one of the deep ravines penetrating the Banker’s Hill neighborhood. Walk on the wooden planks and catch sight of San Diego Bay and Point Loma.

From Quince, turn right at Second Avenue. At the northeast corner of Second and Quince, and again at the northeast corner of Second and Redwood, compare classic revival styles. The residence across Second Avenue at 136 Redwood is one of the earliest (1898) results of a partnership between William Hebbard and Irving Gill. The camphor tree on the corner is one of the largest in San Diego.

A left on Redwood to First brings you opposite Irving Gill’s Bishop’s Day School (1908), now the Self-Realization Fellowship. The Gill-designed wing wraps around an older Tudor structure and epitomizes Gill’s philosophy of simplicity and — using his own phrase — “monastic severity.”

Now head north on First, go left on Spruce, and go left again on Front Street, a dead-end. The fine old houses here, some designed by Richard Requa, have a view over the canyon edge, but that view is screened at street level by tall trees.

Go back to Spruce and head west to walk across the suspension footbridge, built in 1912 to give access to the streetcars on Fourth Avenue. Stand in the middle of the swaying bridge, 70 feet above the canyon floor, and feel the breeze sweeping up-canyon from the bay.

On solid ground again, turn left on Brant Street, another dead end. The house at the end (3100 Brant) was designed by Hebbard in 1907 after his partnership with Gill ended, but retains some of Gill’s influence. Back on Spruce, at the southeast corner of Spruce and Curlew, is a 1914 design by Requa and Frank Mead influenced by Mediterranean and North African imagery. To the north a half block, at 3226 Curlew, you’ll find a 1912 Edwardian house designed by Hebbard.

Across the street, at the southeast corner of Curlew and Thorn, is an interesting Palladian-style mansion dating from 1927. To poke fun at passersby, the plaque here reads “On this site in 1897 nothing happened.” Zigzag east on Thorn, north on Brant, east on Upas, and north on Albatross. On the east side of Albatross are some of the Gill “canyon houses,” dating from 1912–13 and designed to blend harmoniously with the natural landscape.

Around the corner, at the west end of Walnut Avenue, is a seemingly out-of-place Queen Anne Victorian house. Built in 1892 at Fourth and Walnut, it was moved to this site in 1911. To conclude your walk, go east on Walnut to either First or Second and head south back to your starting point. Second Avenue is preferred, as it is the quieter of the two streets. 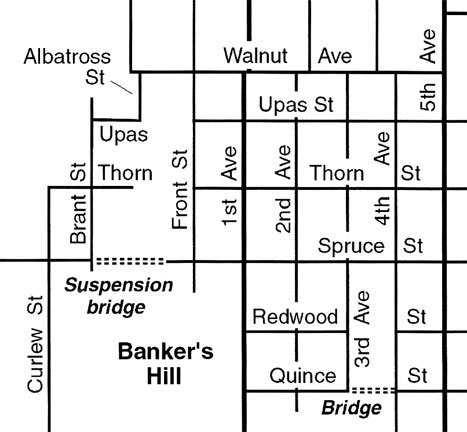