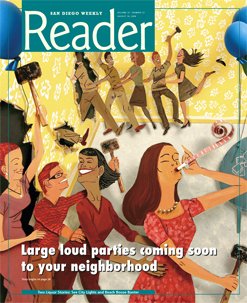 Point Loma — Zonna Pennell lives in the 3400 block of Keats Street in Point Loma, midway up the hill above Nimitz on a short segment of the street that has eight houses of eclectic style. She says longtime residents occupy most of the homes, but when the housing boom went to bust, new buyers turned two of the biggest places into vacation rentals.

“Last year we had screaming, yelling bachelor parties, graduation parties, spring-break parties, and mostly wedding parties,” she says. “Instead of going down and getting a wedding room at the Hilton, they were getting the house here, paying $3000 to [the property owner], which he thought was a great pop, and then these people just screamed and had 400 people over here. It was just horrific. It should not be that I have to work my whole life to have a house to where I come home to have people pissing, puking, throwing their trash, screaming, and yelling.”

Pennell says she complained to everyone she could think of — the mayor, her city councilman, the City’s code enforcement department, the city attorney’s office, and the police department — and each had a reason why nothing could be done.

Joining forces this March with a vocal anti-mini-dorm coalition in the College Area, Rolando, and San Carlos, the city council passed two laws to prevent the creation of new mini-dorms and phase out existing ones. The rooming house ordinance and the high-occupancy permit effectively prevent property owners from cramming rental houses with seven or more adults.

But while the Chalcedony Street residents were thanking the City for preventing the mini-dorm nuisance, other beach-area residents were furious that the new laws did not include language to prohibit vacation rentals.

Marcie Beckett lives across the street from a vacation rental at 4111 Bayard, which, depending on the listing, sleeps anywhere from 10 to 18. Beckett, a member of the Pacific Beach Community Planning Committee and Pacific Beach Town Council, believes the City deliberately excluded vacation rentals from the permit program.

“I can only speculate, but it has to do with money,” she says. “People are making a lot of money on these vacation rentals. Tourists are coming and spending a lot of money. The City doesn’t want to do anything to decrease the housing availability for tourists.”

It’s not the noise, trash, or parking nuisances that concern Beckett the most.

“The single-family neighborhoods are supposed to be the backbone of your community, where you’ve got the stable residents that are vested,” she says. “They join the town council. They coach the Little League teams. They send their kids to the neighborhood schools. Every time you take a single-family residence out of that pool and make it a tourist rental, you’re tearing a hole in the fabric of the community. If you get enough of those holes, your community disintegrates.”

Beckett points out that condo complexes, which are located in multiple-unit residential zones, where vacation rentals might be allowed, have more power to control vacation rentals than do people living in single-family neighborhoods.

“Many of the homeowners’ associations do not allow rentals of under six months,” she says. “So those condo associations have more control than those in the single-family zones.”

The memo provides a list of other California jurisdictions, including Encinitas, Coronado, Imperial Beach, Solana Beach, Humboldt County, and San Luis Obispo County, and summaries of those jurisdictions’ attempts to ban vacation rentals. The memo includes the coastal commission’s rulings and compromises that allow vacation rentals to exist in those cities and counties, along with the regulations and permits the commission required.

In Ewing v. City of Carmel-by-the-Sea, the court ruled, “It stands to reason that the ‘residential character’ of a neighborhood is threatened when a significant number of homes…are occupied not by permanent residents but by a stream of tenants staying a weekend, a week, or even 29 days.… [S]uch rentals undoubtedly affect the essential character of a neighborhood and the stability of a community.”

Pennell says that her home isn’t in the coastal commission zone and that vacation rentals can also be found in inland neighborhoods such as Mission Hills, Clairemont, and North Park.

Deputy city attorney Marianne Green says the matter of vacation rentals in single-family zones is still under consideration by the city attorney’s office.

Even without the court ruling, residents ask, if a property owner is paying the transient occupancy tax (TOT), doesn’t that imply that the property is being used as a hotel, which isn’t allowed in single-family residential zones? On its website, the City refers to the tax as the “hotel/motel tax.”

Pennell sees something more deliberate in the City’s allowing vacation rentals to remain and multiply in single-family neighborhoods.

She points out the number of vacation rentals listed online at craigslist.org and sites such as Vacation Rental by Owner (vrbo.com) and says to do the math. The tax is 10.5 percent. If a house rents for $2000 a week, the City earns $210 a week for one house. Multiply that by the 15 vacation rentals in Pacific Beach’s single-family neighborhoods, and the City stands to earn $12,600 a month, if not more, through the tax. Many houses rent for higher amounts, including the one at 4111 Bayard, which fetches up to $6200 a week in July and August.

“It all comes back to the mayor,” Pennell says. “He wants the TOT because the City’s broke.”

Councilman Faulconer’s approach to solving the problems caused by vacation rentals is to go after them for nuisance violations.

“One of the tools that has been used successfully recently is the CAPP program [Community Assisted Party Program] and the administrative fines program,” Faulconer says. “That really gets to the heart of it if somebody is not doing what they’re supposed to. There’s now a new tool for the police to use.”

The administrative fines program allows police officers to issue $1000 citations to residents or landlords for loud noise and parties. CAPP enables police to designate a house as a problem, allowing officers who respond to a call to that house to take a zero-tolerance approach, citing or arresting violators.

There are 39 “capped” houses in the 92109 zip code, but CAPP data does not include information on whether a house is a vacation rental.

“I believe one of the administrative fines that they’ve issued to someone for being too noisy was to a vacation rental home,” Faulconer says. “From my standpoint, I want to make sure that we’re protecting the quality of life for neighbors and for people who are visiting alike.”

Residents say there are a number of problems with Faulconer’s approach. First, it allows vacation rentals to exist in single-unit residential zones. Second, it deals only with noise and loud parties. Third, it puts the burden of enforcement on the neighbors. Last, responding to noise complaints is a low priority for police officers.

Penny Campbell has called police numerous times to complain about the noise coming from the vacation rental at 4135 Cass Street.

Originally a three-bedroom, one-bathroom house, the now–four-bedroom, four-bathroom house sleeps up to 12 people and rents for $3900 to $4700 a week during the summer months.

“It can take anywhere between two to seven hours” for police to respond to a noise complaint, Campbell says. “One time the police didn’t drive by until a quarter to seven in the morning, when the problem was occurring at one or two in the morning. By the time the police come by, it’s a totally different scenario because the response time is so long. One of my major issues, you have no recourse. You can call that number all night long, and no one is going to show.”

There are at least seven vacation rentals in a three-block radius of Campbell’s house, where she lives with her husband and two young children. She says she was recently asked if her seven-year-old daughter’s Brownie troop could have a sleepover in her backyard, but she had to say no because of the frequent late-night gatherings by the vacationers next door.

“My issues have always been the profanity, the noise, and the hours,” she says. “There’s also an uncomfortability. I don’t know who these people are that are next door.”

Because of the documented complaints, Campbell, Beckett, and Pennell say, owners and property managers in their areas are now renting to more families, which generally aren’t disruptive, but all three are still demanding that the City get to work preserving its single-family neighborhoods. Beckett points out that there are plenty of vacation rentals in properly zoned areas, such as Mission Beach and along Ocean Boulevard in Pacific Beach.

“We’ve argued that these are illegal in the RS zones, and they tell us there’s no ordinance preventing them,” Beckett says. “If that’s the case, let’s write an ordinance and fix the problem.”

here is the way you get the police to respond to noise. Call from several numbers (home, cell, friends cell, neighbors phone). If they receive 3 or more calls then it becomes a priority.

Come on San Diego, Let's Vote this Permanent Alcohol Ban down again. The City Council was offered a Holiday only ban and is going straight to taking away our Freedom to enjoy our beaches, bays and parks the way we want. We all pay taxes for these "public spaces" and should be able to have a beer at the park while I wax my car in the summer, while I play volley ball or horse shoes at the beach or after a ride on my jet ski at the bay. Enough is enough! VOTE No on Prop D - Stop the Permanent Alcohol Ban in San Diego.

I am wondering how a local ordinance to ban or restrict a home business such as a vacation rental is reconciled with existing state law on supporting the need for more "microenterprises" for spurring economic growth (see http://www.microbiz.org/ for CAMEO: California Association for MicroEnterprise Oppourtunity, complete with California State Assembly whitepapers...)

I don't have a problem with vacation rentals so long as guests are quiet and respectful.

My family and I rent vacation homes a few times a year and we really enjoy it. It's better for our family to be in a home with a kitchen and more space, than being in a hotel or at a resort.

no one is allowed to have fun anymore, misery loves company.