Bang Your Head, Swing Your Hair

I remember the band Mickey Ratt back in high school, in 1970-something. They were the big local band around town. I was at some parties they were at. It’s all kinda hazy for me right now. One time, at an underage club called Stratus — don’t know where it was even at — I saw them on stage. It was different from seeing them play at parties. They kicked major ass.

Time went by. I got into radio around the same time they started to get some airplay, around 1984 or ’85. Their name was then just Ratt, and they had a different line-up. I was at KGB then. DJs would always say, “A little Ratt and roll for ya.” 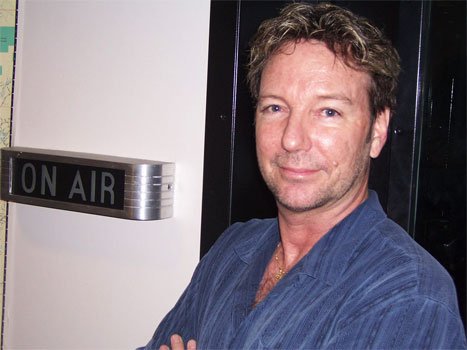 “Round and Round” was the huge hit single. It went off like a rocket. When I first heard it, I was blown away. Van Halen had saved us from disco, and Ratt was on the scene. I played that on a cassette, from Out of the Cellar. I wore it out, eventually. In the studio, I turned the monitors up as loud as they would go. The opening kicks in, you can’t help but just start swinging your hair and banging your head. It never got old for me.

MTV was getting big, and I was watching it one day. The video for “Round and Round” comes on. It starts with a butler in a rich mansion, I believe, then cuts to this stunning chick, looking right at you. And my jaw dropped. I said “Holy shit…it’s Lisa!” Lisa is a gal I went to college with. I majored in drama. Lisa was in a group at Mesa College back in the late ’70s; a model at the time, with Tina Real Agency. We dated a few times. It was very incestuous in the drama department back then.

Another hottie, San Diegan Tawny Kitaen, was on the cover of Out of the Cellar and in the video “Back for More.” This was before she was in the more popular Whitesnake video sliding all over the Jaguar.

Here's more of Rick Lawrence...that didn't make it into the hardcopy of the Reader:

The other albums…Invasion of Your Privacy, Detonator, with Loving You is a Dirty Job. I always loved playing the songs. It warmed me up that they started here in San Diego. Some of the band members weren’t from San Diego.

Singer Stephen Pearcy started doing his solo thing around 1992, before getting with the band Arcade. I was at Rock 102 then. He’d invite us to the shows, party on the bus afterwards. Things always got out of hand, as they usually do. The last time I saw him, it was his still solo thing, around 1996.

I went backstage, at the House of Blues downtown. I gathered up the troops, my wife and stepdaughters, who were thrilled.

During the show, I was surprised to see on stage, a guy with his head shaved, except for a big row of spikes down the back of his head. It was Erik Ferentino from Voodoo, a local band I promoted when I did the local show at Rock 102.

We went backstage. I took my family with me. We reunited, told old stories and went back onto the tour bus. Frankie, I can’t remember his last name, the guitarist for the band, starts chatting up my older stepdaughter, getting a good groove going on there.

I’ve gotten old and gone full circle, and gotten the whole family into this rock ‘n roll scene. I’ll just have to keep an eye out on my girls.

I heard Eric’s band, Anti Division, is opening up, so that’s gonna be pretty cool. I’ll bring the family again.