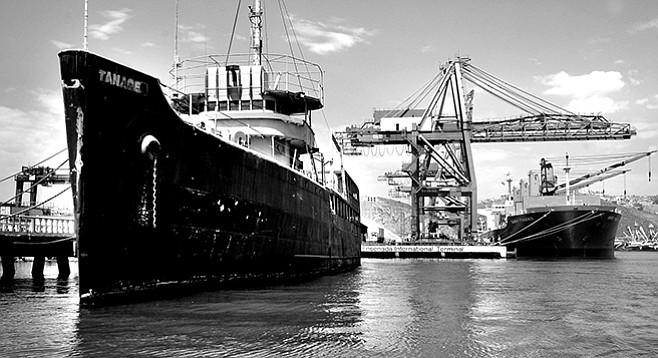 No fewer than 50 framed diplomas and certificates hang on the wall in the office of José Ríos Hernández, the capitán del puerto, or harbormaster, of the port of Ensenada. A cherrywood desk the size of a dining room table sits in the middle of the office, but Ríos eschews it in favor of the leather couches against one wall. As harbormaster, Ríos is in charge of the growing port. "We monitor the safety and security of all port operations," he says, "and we enforce the maritime laws and regulations. We check all the cruise ships and container ships that come in to make sure they're seaworthy and that nothing illegal is going on."

It's a big job, Ríos says. And it's made more difficult by the fact that he's spending increasing amounts of time and money on a nagging problem: ships and boats abandoned and sometimes sinking in his harbor.

Ríos stands about six feet tall. He's dressed in the uniform of his office: black patent leather shoes and pressed black slacks; white shirt with short, creased sleeves; epaulets; and a name tag pinned on the right side of his chest. The white hair on the back and sides of his head contrasts with the stripe of dark gray hair on top. Ríos's manner and the effortless way he handles the requests and questions of an underling who pops in and out of his office suggest that he is a man used to authority. But there's no hint of sternness in his manner. His face is warm and kind, and his speech is peppered with jokes and one-liners. He rolls his eyes and chuckles when asked about his abandoned-boat problem. "It's a national issue," he says, leaning back in the couch and crossing his legs. "Over the last three or four decades, the fishing fleets in ports all over the republic have gotten older. The average fishing boat is now over 30 years old. That's very old for a boat that's used in the ocean nearly every day. So what's happening is many of these older boats are breaking down or falling apart, and their owners don't have the money to repair them. Or maybe they do have the money, but instead of spending it to repair old boats, which can be extremely expensive, they're buying new boats. Either way, the old boat is abandoned."

Ríos adds, "So about ten years ago, the federal government began a program to rid the harbors of these abandoned vessels. And here in Ensenada, we've got the problem about 60 percent contained."

Recently, newspapers and television news programs in Ensenada and Tijuana have reported that the abandoned vessels are polluting the bay. The mention of such reports makes Ríos roll his eyes again. "Yes, there have been a lot of media reports saying that, but they're not really true. The abandoned ships aren't really polluting the harbor. The kind of pollution they do cause is sight pollution, because they are very ugly and the birds make them dirtier and dirtier. But the biggest problem with abandoned vessels is they're a danger to navigation in the harbor. That's why we have a duty to get rid of them."

Asked how he rids Ensenada harbor of abandoned vessels, Ríos sighs, leans forward, and rests his elbows on his knees, his chin on his right hand. "It's a very slow and exhausting process," he complains. "First we have to figure out the name and registry of the boat. That can take time. Then we have to track down the owner, which can take a lot of time and work. If we're able to find him, we tell him he's got a certain amount of time to get rid of it. And we can threaten him with legal action if he doesn't get rid of it. That usually works, if we can find the owner. But often we can't find an owner. So we have to go before a judge and get the boat declared ours. Then we put out a request for bids for dismantling the boat. We accept one of the bids, and the boat is destroyed. The whole process can take months, even years."

Why not sink them offshore to create artificial reefs?

"Artificial reefs were very popular all around the world 10 or 15 years ago," Ríos says. "Divers love them, and they attract fish. But lately, a lot of environmental concerns have been raised about the practice, and it's not done very often anymore. We have considered it. There was talk about taking 10 or 12 smaller vessels and sinking them in a group down at the south end of Ensenada Bay. But because of the current environmental climate, we abandoned that idea."

Ríos estimates that 95 percent of the deserted vessels his office deals with are "from the fishing fleet." The other 5 percent are a mixture of pleasure craft, sailboats, and the occasional former ferry or military vessel. "We have here a former U.S. Navy ship called the Tanager," Ríos says. "It was a minesweeper during World War II. It showed up in Ensenada harbor two or three years ago. From what we've been able to find out, it was purchased at a U.S. government auction for $10. The owner brought it down here and disappeared. Now it's our problem."

Ríos flops back into the couch and heaves a sigh of frustration. "You know, getting rid of these abandoned vessels is a huge nuisance for us. We've got a lot of serious work we need to do. We've got a growing container port here. We've got cruise ships coming all the time. There are two in port right now. We've got terrorism concerns. Just after Christmas 2005 we had an 885-foot ship run aground near here. We've got plenty of work to do without dealing with these abandoned boats. I understand it has to be done. They're a danger to navigation, and particularly if they sink, they can cause pollution. I only wish something had been done about it before. This has been a growing problem that authorities knew about for decades, but nobody did anything."

A half-mile from Ríos's office, Ramón González, an officer of the Capitanía de Puerto de Ensenada, the agency Ríos heads, steps onto a harbor patrol boat. He's dressed in the same style of uniform Ríos wears, except his pants and shirt are tan instead of black and white. The boat's about 25 feet long, with a high, sharp cutwater at the bow and two 225-horsepower outboard engines at the stern. It's made for speed through choppy water. But the water in Ensenada harbor today is little rougher than glass. As his partner, standing at the covered center console, backs the boat out of its slip, González points out a half dozen abandoned vessels tied to mooring balls 40 yards off the end of the dock. "This one's an old commercial fishing boat," he says, pointing to a metal-hulled boat maybe 60 feet long. To its left lies the hull of a wide-beamed sailboat of 50 feet. There's no mast, and everything above the cabin is charred black. "Fire," González says. "Vamos a la Tanager," he calls to his partner, and the twin outboards roar to life, drowning out all conversation. The boat's heading southwest toward the container-ship dock against the seawall that forms Ensenada harbor. To the left a quarter mile, the Carnival cruise ships Elation and Paradise are moored to the wharf at right angles to each other. Their towering superstructures block the view of the mountains behind Ensenada.

After five minutes or so, González's partner throttles down as the boat reaches the Tanager, which is moored with its starboard side against a dock near a shipping-container yard. Launched in December 1944 by the American Ship Building Company in Lorain, Ohio, the 221-foot ship served in the U.S. Navy, then the Coast Guard, until 1972, when it was sold to a Seattle man named William A. Hardesty. "It was left here about a year and a half ago," González says. "And the owner has disappeared."

The superstructure of the aging ship is painted gray, while the hull is black. González points to where the water laps against the side. "Do you see how it's rusting right at the waterline? It takes on water through those rust holes. So we have to pump it out every couple of weeks to keep it afloat." Farther to the south, near the entrance to the harbor, three rusty fishing vessels lie moored side by side. The first two are named Kunimatsu 5 and Kunimatsu 11. "Those two came into port from Japan as working fishing boats," González says, "crews and all. But they left them here. They probably needed repairs and the company didn't want to pay for them. So they left them. I don't know how the crews got home. The bigger ship, beyond the Kunimatsu ships, it came in full of Chinese illegal immigrants."

About a mile straight into the harbor from the outlet to the open ocean, the ferry Catalina lies sunken in the mud, leaning 15 degrees to port. Most of her hull is underwater. All over the exposed bow deck, sea lions lie sunning themselves, some prostrate, some throwing their heads back to let the sun warm their chests. One big bull barks out as the patrol boat approaches. At the stern of the 200-foot ferry, in what was once the restaurant area, stands a red semicircular bar with a brass foot rail. But instead of daytrippers on their way from San Pedro to Avalon, lazy sea lions surround the bar. One lies right on top. "This ship came in seven or eight years ago and sank," González says. "Now it's a home for sea lions."