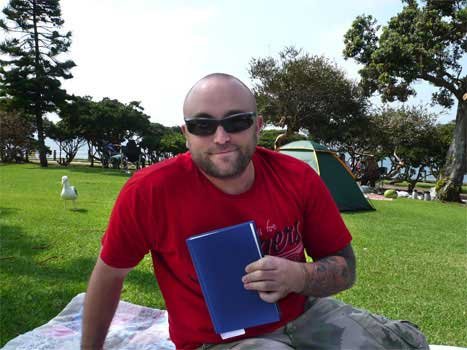 What book are you currently reading?

"The Big Book of Alcoholics Anonymous I've read through chapter four, but I decided to read a little of the preface."

Tell me about the book.

"It's basically the main text for Alcoholics Anonymous. It's the stories of people who have gone through it and pretty much the basis of the program, all of the steps and how you go about those to get yourself out of alcoholic dependency."

What do you make of the argument?

"So far, it's definitely ringing true to my ears. It's been helpful so far. From the experiences I've had, and the meetings I've been at, if you're an alcoholic, you can definitely relate to this book."

Tell me about the style and language?

"A lot of it is testimonial style, so you're getting someone's direct point of view on the experiences they went through and the actions they took, but then it takes a step back and ties it all together. I'm not really reading it from a critical point of view, though!"

Compare this with other books you've read.

"I've read stuff by Tony Robbins, and I think he and those kinds of self-help people draw upon the same attitudes and concepts that are in this book, so I think they're very similar in some sense."

"1984 and Fahrenheit 451 are two that I remember from high school that changed my way of thinking a little bit. A lot of the stuff in 1984 you see happening every day, with people's rights being eroded. It is ringing true."

"A cool science fiction writer, William Gibson, wrote Neuromancer, kind of a cyberpunk style. His style is hard to follow, but I like it. I like anything about the future, future society."

"None regularly. I read the Tribune, I read the Reader , basically whatever's lying around, but I don't subscribe to any."

"Depends on what friends I'm talking to. Anything from politics, stuff going on, who's advertising where. You relate to different people on different kinds of levels."