Visit three palm oases in the midst of one of Anza-Borrego's driest quarters.

San Diego — Smack dab in the middle of the most desolate part of the Borrego Badlands stands a remarkable triad of palm oases. The best known of these, Seventeen Palms, is a popular destination for park visitors. The other two lie just a short distance away. They are accessible in a roundabout way via off-road vehicle trails or overland on foot as described here. Since the hiking route is partially "cross-country," it is appropriate for hikers skilled at navigational techniques, including the ability to read a topographic map. The Anza-Borrego Desert State Park visitor center in Borrego Springs can help you with your map needs.

First, you must drive to Seventeen Palms oasis itself. From Borrego Springs, follow Highway S-22 (Palm Canyon Drive, Pegleg Road, and Borrego Salton Seaway) generally east for about 16 miles to the Arroyo Salado Primitive Camp turnoff on the right at mile 34.8 (according to the roadside mile markers). Pass through the camping area and continue along the four-wheel-drive route southeast down the sandy, rock-strewn Arroyo Salado wash. After 3.5 miles, a side road on the right quickly ends at a parking area just short of Seventeen Palms oasis.

The oasis itself was used for decades as a functional prospectors' post office. That tradition continues today, as you may find modern travelers' business cards, as well as a park register, in a barrel wedged between two palm trunks. Any water found at the oasis is not potable, so be sure you already have drinking water in your pack.

Start hiking cross-country at the north end of Seventeen Palms grove (elevation 410 feet). Follow a bearing of about 200° (generally south-southwest) over the intricately dissected terrain. In about 0.5 mile you'll cross a rise (510 feet). From the rise you can look south into a seemingly endless maze of mud hills. Make a descent into any of the several small washes directly below, which lead one way or another downhill to the Cut Across Trail (off-road vehicle trail) in Tule Wash, about a mile from the start. The exact route across this convoluted terrain is your choice -- though you may find yourself from time to time on paths worn in by previous hikers.

Turning left (east) on the Cut Across Trail, you should soon catch sight of Una Palma (single palm), its forlorn crown peeping above the mudhills. A stubby side road leads north to it.

From Una Palma itself, head northeast, once again cross-country over undulating mud hills. Topping the first hill, you'll be able to see at least the tallest palm at Five Palms Spring, 0.5 mile away. Head directly toward it, east across the mud hills. About five large and small palms grow here -- though the exact number fluctuates as larger ones perish and fall and young upstarts replace them. It is a coincidence that all three oases you have visited lie at virtually the same elevation, 410 feet.

A short pathway leads down from Five Palms to the off-road-vehicle route in nearby Tule Wash. Turn left and follow it (and later the Arroyo Salado jeep road) nearly a mile northwest back to your car at the Seventeen Palms parking area. 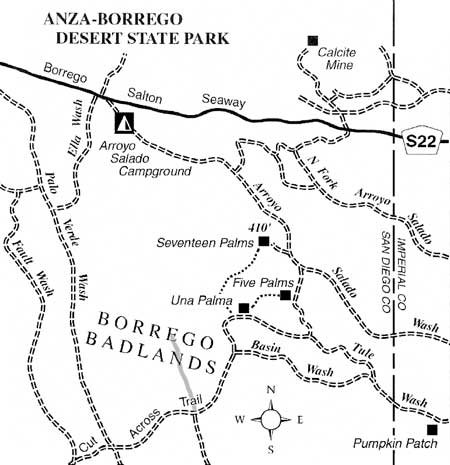