Is my cat left-handed? Whenever she plays with her toys or her food, I've noticed that she uses her left paw more than her right. Do animals have a dominant side like people do? 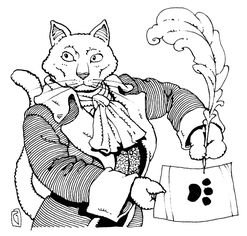 Grandma's dog wears his watch on the right, so is he left-handed? But other than that, who woulda thought anybody would care about this? Well, anybody official. Anybody who gets paid to study stuff. Once again, science astounds us. You've probably replicated some of their experiments right there on your living room rug with a willing feline and a flashlight. The science guys put on their lab coats, grabbed their clipboards, and watched to see which paws the cats used, when, and for how long, as they teased Tabby around the lab with a little pin spot. Seems that test cats do have paw preferences. And more than half of them were lefties. Not to say that any animals other than primates are strongly lateralized. I guess they can use either hoof to sign checks; but according to a number of studies, any given cat will likely have a paw preference. The dominant paw showed greater speed, accuracy, and dexterity, so the trait does serve a purpose.

Cats' brains are considered good models of the human brain, which is why cats would be in a lab in the first place. Dogs are more goofy and lovable but have less interesting craniums, it seems. One group of sci-guys did round up a bunch of pooches, put tape carefully on their noses, then waited to see which paw they used to scrape it off. In previous attempts, labsters had noted that males were a little lefty and females slightly righty, but the newest attempt didn't even confirm that, and in general there was no amazing or amusing data from the dog world. Lab rats? Lefties (77%) in one study, at least when they're pushing levers to get food.

Pak, and the other -stans

What does "Pak" stand for in the word Pakistan?

With the exception of Pakistan, all the "-stans" in that part of the world got their names from the peoples who lived in each particular region. Uzbekistan, Afghanistan, Turkmenistan, etceterastan. "Stan" is derived from Old Persian and means "homeland" or "country." (Tajikistan, land of the Tajiks. Tajika is Sanskrit for "Persian," even though the Tajiks might not really have been Persian. It's a very confusing part of the world.) Oh, yeah, anyway, Pakistan is the only stan that was named by a committee. Pak is Urdu for "pure." Urdu is the dominant language in Pakistan. You'll sometimes see Pakistan referred to as the Land of the Pure. But that's the short answer and is maybe more coincidence than the true origin of "Pak." The long answer involves more history.

Pakistan didn't even exist as a country until the late 1940s. Before then, the present-day boundary comprised five regions of British-ruled India. As the Raj dragged on, the Hindu population began to dominate the social and commercial life of the country. By the 1930s, a group of Muslim poets, scholars, and politicians at Cambridge University began agitating for more recognition of the Muslims in northern India. A famous tract published in England in 1934 referred to the "30 million Muslims of PAKSTAN." PAKSTAN was the author's quasi-acronym formed from the names of the five Muslim northern India states: Punjab, Afghania, Kashmir, Sindh, and Baluchistan. That was the first printed reference to the name. Later there would be a PAK Plan and a PAKSTAN Declaration, and in 1947 Pakistan, the country (with the i added).

Just wondering why it is that we have a set phrase for when someone sneezes but not when they cough or yawn.

Are there now or have there ever been any societies where it was socially acceptable to fart in public?

If there are any now, no one would want to go there anyway, so it doesn't matter. A 19th-Century Frenchman ("Le Petomaine") once made a fairly good living farting pop tunes of the day on the vaudeville stage. He apparently had exquisite control over his ano-rectal region and could play his butt like a tuba. So, selective farting in France might be considered "socially acceptable." Farting, according to whatever written records exist about the habit, has always been considered if not exactly rude, then uncalled for. Or raucously funny, of course. Back in ancient history, farts were akin to the wind of the devil, like sneezes. Evil spirits escaping the body, which was a good thing but probably still not encouraged in large groups. Some cultures appreciate a good burp as the sign of a satisfied diner, but farts not so much. The "bless you" after a sneeze is related to its old association with evil spirits. "Bless the rest of us" might be better in the case of a fart.

cats are ambidextrous. Observe Nora, the piano playing kitty, on youtube. She is clearly right hand dominant, tho.