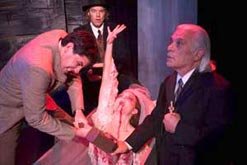 Dracula, by Stephen Dietz, adapted from the Bram Stoker novel

The Frogs, by Aristophanes, co-adapted by Marianne McDonald and J. Michael Walton

Born in 1847, Bram Stoker grew up near Dublin, Ireland, next to a cemetery for suicides. According to local folk legend, people who took their lives resided, like ghosts, somewhere between life and death, between here and the "other side." Some say young Stoker played amid the marble markers, reading epitaphs and making up creepy stories about the undead rising from below.

Ghoulish Bram's the standard picture. But he always claimed to have "a sound mind in a sound body." And that his great love was theater ("the Faith which still exists," he wrote in 1898, "is to be found more often in a theater than in a church"). He loved it so much he reviewed plays for the Dublin Mail for free. He spent many years as actor-manager for legendary Henry Irving, doing PR, play-doctoring, scheduling appearances, and writing an estimated 50 letters a day in Irving's name.

North Coast Rep's Dracula sides with the latter Stoker. Directed by Christopher Vened, the production favors theatricality to camp or over-the-top attempts at hair-raising. Some of the most memorable images are stage-wide tapestries, as when Renfield's breaking out of his straitjacket, while two vampires attack innocent Jonathan Harker, and Lucy, backlit by lightning, longs for the arrival of her fang-toothed beau.

In this ensemble concept, the characters are so close to their secret lives and "hidden" selves, and so sexually starved, they might not need the Count to turn them loose. The ripeness is already there.

Steven Dietz's adaptation, which tries to replicate almost the entire novel, has lulls the cast doesn't overcome (a problem with staging Dracula: the audience is always way ahead of the story). But the performances are of consistent quality. Sean Sullivan's Renfield's a caged Hannibal Lecter on steroids; even before she succumbs, Christy Yael's graceful, driven Lucy moves like a restless gymnast. Jason Heil's Harker and Brenda Dodge's Mina nicely reveal Victorian propriety coming apart at the synapses.

Matt Thompson's Count, and this is probably directorial, is a super-seducer in control -- and once he comes to London and sups fresh blood, even more so. But a subtext runs through the book that Thompson could underscore: Dracula's cursed. Beneath his sensuality he's a slave to needs. Each day repeats the one before, for hundreds of years, maybe forever, or at least as long as humans walk the planet. He "fears time," fears "want," and at play's end, a character says "his misery is the saddest of all."

The night I caught Dracula, the best moment was unplanned. Two-thirds through the first act, a woman in the second row had severe difficulties breathing. The show stopped. The audience went outside for about 15 minutes, then came back in (a paramedic said the woman was okay). The stage manager announced that the cast would go back two minutes in the script and begin from there.

It sounded easy. Actors who've had to come back after an interruption will tell you it's anything but. Real drama just upstaged you. Now recreate an illusion. Amazingly, the actors pulled together. After a few halting lines, and a lot of eye contact, they did the scene and drew the audience back into the play. In some ways that moment, courageous actors digging in and going forward, was as dramatic as the emergency. It's one of the reasons why Bram Stoker loved theater -- and why I always will as well.

Athens is in crisis. It has no great living writer. Aeschylus is gone, same with Sophocles. Now Euripides, the comic playwright, has died. The city has no poetic voice, only hacks. So, in Aristophanes' play The Frogs, Dionysus disguises himself as Hercules, lion's mane and skin, loads down his servant Xanthias with luggage and journeys to Pluto's Court in Hades. He'll bring back the best deceased Greek writer. Question is: who wears the laurel -- Aeschylus or Euripides? Dionysus conducts an underworld Battle of the Poets to find out not who's best, it turns out, but who will best serve the state.

The Theatre, Inc., opened its intimate new space with a spirited, though uneven, staging of Frogs. The production has inventive ideas, such as Charon, underworld ferryman, rowing the S.S. Styx. But many need tightening. A chorus of "Frog Divas" hopping around in lime-green outfits is a kick. But too often they, and other cast members, stress business over vocal clarity and garble Marianne McDonald and J. Michael Walton's witty, often rhyming adaptation (the theater may contribute here; sound appears to climb straight up). Other extended comic bits, including a rap number, tend to sprawl and slow the pace.

Highpoints include co-director Douglas Lay's tipsy performance as Dionysus (rightfully more fragile human than impervious Greek god), Fred Harlow's physical shenanigans as Xanthias, and Michael Nieto in multiple roles. Aristotle thought most comedy was vulgar, especially the scatological works of Aristophanes, who never met a bodily function he wouldn't exploit. For its inaugural production the Theatre, Inc., makes a mission statement with The Frogs. Throughout it honors the playwright's delight in bargain-basement low comedy. In doing so, the company declares that it won't play safe or sweep infelicities under the welcome mat.