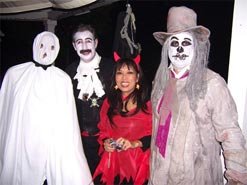 I heard of about 20 different parties over the two weekends before Halloween. Most of them were cancelled because of the fires. The first weekend, I had intended on going to four of the parties but only made it to two.

The first was in El Cajon. Two things blew me away as I pulled up: a beautiful maroon Corvette in the driveway and the house, with its elaborate Halloween decorations.

The garage resembled a disco, with colored strobe lights and skulls hanging from the garage door.

The side yard had several tombstones. There were spiders in webs everywhere. The living room had fog lights and a mock autopsy was being performed on the dining room table. There were sound effects that you'd hear in a haunted house.

The side deck had more skulls and decorations, but there was nobody out there.

The back yard, which you had to take stairs to get to, was decorated in a pirate theme. It looked as if you were walking through a Pirates of the Caribbean movie set.

I got there early, and there were only a handful of people. Vikki was getting her costume and makeup on. There was a muscular bald guy in a white T-shirt. I told him he reminded me of one of those strongmen from the circus. He said he's told that he looks like Mr. Clean.

A few guests were dressed as pirates. When one started messing with a cannon I said, "Be careful. If a cannon ball fires, it can put an eye out." He said, "I'm fixing the fog that's supposed to come out of here." A few minutes later, smoke came billowing out.

It sounded like the song "Yo Ho (A Pirate's Life for Me)."

There was a skeleton floating in the pool and a tent set up at the other end of the pool. When I walked inside the tent, there was a head in a crystal ball that would tell you a fortune. I said to the person next to me, "They should've put a Magic 8 Ball in here too. It would be fun to hear her fortune and then ask the 8 ball to see if they match up." She said, "Don't those things only say things like, 'It's quite possible?'"

There was a naked mermaid lying by the pirates, and someone said, "Vikki spent hours putting the makeup on it." When she came down, I was told how much time she spent on everything. "Uh, could I borrow the mermaid for the weekend?" I asked. She laughed, but someone nearby said, "What for?" I replied, "Uh, well, I, uh...want to use the carpool lanes."

Vikki told me about searching for clothing for the pirates and jewelry purchased from thrift stores. It looked authentic in the open treasure chest. I told her she should keep the pirates up year-round because it all works with the swimming pool. She said the weather would damage everything. I asked her if the trick-or-treating kids would come through. "No. This is just for the adults."

Her brothers and husband helped her set everything up. I met Vikki's husband an hour later, as he was busy transforming into the evil clown "Pennywise" from a Stephen King book.

I realized I had gone to a lot of costume parties as I repeated jokes I'd used in the past, such as telling a couple in robes that they did that because they can just jump in bed when they get home. The guy with the referee shirt I said worked at Footlocker.

Someone brought Jell-O shots that were like nothing I had seen -- pineapple-flavored shots in syringes. When the "nurse" handed me one, I found this to be the easiest way to eat Jell-O shots. I pushed it right into my mouth.

Another couple heard me talking about how it sucked that kids wouldn't see the decor. They said, "We had done an elaborate set-up like this for 11 years. We'd have 12 people working it. And kids wouldn't even stop for their candy. We would always judge how successful it was by candy on the street in our cul-de-sac. I'd jump out with a chainsaw running after they thought it was all over. They'd run out of there and drop everything."

One couple was admiring the pirate jewels. I said, "Yeah, even pirates like a little bling." Just as I was finishing that sentence, smoke shot out of the cannon and scared me. I almost fell in the pool. The guy said, "Just be glad a real cannon ball didn't shoot out of there."

I found out most of this crowd was in the Corvette Owners Club of San Diego, which, I was told, is the oldest Corvette club in the U.S. It started in 1956.

I asked one guy about his Corvette, but he said that he had three.

A couple named Peg and Charles told me about their 2005 Corvette. I asked if that was their only one. They had three of the sports cars as well. Another person told me that the DMV wouldn't allow him to get 666 on the license plate for his black 'Vette. I saw it outside. The plate had "6six6." * * * The second party was in Santee. A band in the back yard was playing "Born to Be Wild" as I walked in. There was a bongo player who sang the vocals to "Keep Your Hands to Yourself." During another song, he played a cowbell the entire time. When they finished, I yelled, "Less cowbell," since everyone always yells "More cowbell" from the SNL skit. The previous party had a crowd in their 40s. This crowd was mostly in their 20s, and the costumes reflected that. A lot of the women were showing skin. The guys were wearing the usual costumes: Beetlejuice, Jack Sparrow, a firefighter, a Reno 911 cop. I wondered why nobody got creative from current news events. Maybe someone as Senator Craig, a toilet seat attached to them. When I saw a Napoleon Dynamite, which you see a lot of, I wondered why nobody did the geek character McLovin from Superbad . Someone there asked me how I'd do that costume. I said you could have a fake ID, geeky glasses, and a McDonald's shirt changed to say "McLovin."

The back yard was packed, which meant several smacks in the face from a sombrero one guy was wearing or angel wings on a woman.

This party had one thing I'd never seen at a Halloween party before -- strippers. They had Ultimate Fighting on in the living room when one woman said, "Turn this off. It's time for boobs." I wasn't sure what that meant and retreated to the kitchen where I talked with a priest (a fake one, I assumed). Two strippers in the living room started dancing for a guy who was sitting on the couch. Apparently, it was his birthday. The priest said to the crowd, "It looks like you guys are sinning."

The women had their clothes off in no time. A drunk girl in the crowd had given one of them money and said, "That was a waste of $40," and then she walked away. I watched for a few minutes before going back outside to listen to the band. I overheard one couple fighting. The guy said to his wife, "You just don't want me to go in their and watch the strip show." She said, "No, it's not that. I want to watch them, too."

The band finished their set, and I grabbed a cupcake before talking to them. One of them said, "The crowd didn't seem into it, did they?"

I said, "That might not have as much to do with your performance as it does with the performance going on in the living room."